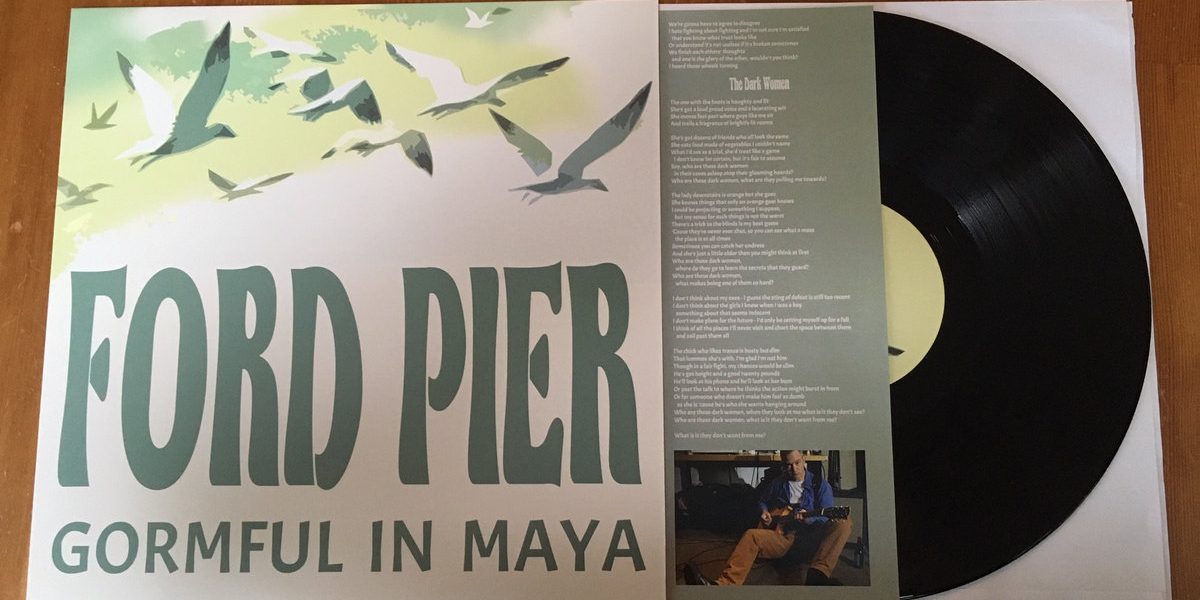 Vancouver singer-songwriter Ford Pier released his latest album, Gormful in Maya, last fall. Spring Magazine caught up with him to discuss his musical inspiration, latest album, the impact of COVID-19, and government inaction.

I think a good introduction to your music is that it’s almost impossible to give one. From being a member of groups like DOA and Roots Roundup, to recording with the likes of Neko Case and others, where do you find your musical centre?

The first music which really penetrated me, around the age of ten or eleven, used big theatrical gestures and conceptual bombast to express very nuanced ideas, and to illustrate contradictions in the characters who were animated by those ideas and the world of which they were a part. We’re talking DEVO, The Who, the operas of Wagner. I haven’t moved too far away from that. My music doesn’t sound very much like any of them, I don’t think, but it’s concerned with a lot of the same things and makes use of some of the same mechanisms. I like to be set up to be surprised by the obvious, and I like to learn about things from the reflections they cast on their opposites. The style of the music as such isn’t very important.

Your latest album and single go for the Billy Bragg guitar-and-vocal delivery. Was that partly Covid-inspired or something you wanted to add to your musical hat?

I don’t like playing acoustic guitar, and going back to the ’90’s, whenever I’ve had to play solo, I’ve preferred to do it on electric. Would you believe that when I started doing it that way, Billy Bragg had never actually occurred to me as an antecedent, even though I liked him a lot when I was in high school and think “Between The Wars” is about as good a song as you could hope for? I had to have it pointed out to me one time.

As a matter of fact, the record was finished before there were even early murmurings of Covid’s approach. Writing and performing the songs in the way they appear on the album was a function of having started to do more solo touring and being frustrated at having to go way back in the catalogue for anything that was suitable to perform that way. The writing I’d done for my bands over the last ten years tended towards the sorts of things construction-wise which couldn’t be convincingly pulled off by one guy – at least not if that guy was me. So I had the radical idea of writing a few singer-songwriter-type numbers. Presto! Once I set myself that assignment, most of the songs came out pretty quick.

What were some of your favourite songs to write and record for Gormful in Maya? What ideas got you the most excited?

I like how “I Can’t See You” came out, but I don’t enjoy performing that one because I have to fight the urge to rush it, which is tiring. One thing that I think is successful about it is that everyone who hears it thinks it’s about THEIR side of the argument. Any argument. I’m warmed by the idea of adherents of incompatible points of view having the same theme song. Not in a “We Are The Champions” sort of way, but in a way that makes space for the imagined wrongness of their opponent, and which aspires to forgiveness and acceptance within themselves. “Donatism” is almost the exact opposite. Everyone thinks they’re being mocked. That’s not even slightly true, but the fact that people on either side of the aisle come away from that one quite certain they’ve had their nose tweaked lets me know I did something right.

And speaking of Covid, I know it’s been hard on creative communities. Bands haven’t been able to perform, and work has been precarious for so many that perform and work at venues and record stores. What has your general response been to Covid and how Horgan and governments have been dealing with it?

My response has not been dissimilar to the premier’s. I haven’t done much. I’m not one of those people who thought this was an opportunity to get a bunch of extra creative work done or whatever. That sort of thing is important enough to me that I’ll usually find a way to look after whatever needs to get done no matter the circumstances. I’m lucky I have a straight job that’s been able to find a path through the current instability, and even thrive within an adjusted index. Time that I haven’t been able to perform throughout this period has been spent more reading other people’s books and listening to other people’s music than coming up with the great lost Covid album in my secret laboratory. I mean, of course I’m doing a little writing and recording and finishing off this and that, but for me, finding myself extra stuff to do along those lines is a misuse of the time. This is a time for listening, not for forcing more of oneself into a space that’s opened up in one’s life. It’s important to do nothing.

Unless people’s lives depend on your taking action, of course. Then you should do things. And out of the list of things that should be done, extreme priority should be given to the ones which save people’s lives and protect the security of those whose lives might otherwise be jeopardized. The landscape is decorated with nonentities who think they’re taking up some part of this mission by busying themselves with totally ancillary matters.

Horgan? He’s your garden variety unimaginative administrator who presides over a polity that would not reward him, or anybody who works for him, for doing what was good for them, any more than they would reward the federal government for assuming emergency wartime powers to tell landlords and business owners and schools what to do. People who are drawn by nature towards success in politics or civil service seem to be, far from slavering murderous shoggoths, blinkered and torpid proceduralists whose jobs will always consist of devising and maintaining systems and plans of ever-escalating degrees of complexity and unwieldiness to address the concerns of the immediate present–with any thought to whatever results are actually achieved being somewhere between a distraction and a liability. They want to remain employed, pure and simple, and they always will be because there will always be plenty of us who think we prefer what we identify as freedom to prosperity, or even life. It does not have to be thus.

So when the world opens back up again, which bands, venues, cities, and breakfast joints do we need to check out?

Every goddamn one of them.

Only what I said before about how I really believe this is a time for listening. For being still. The best way to honour the things that have been taken away from us right now is to leave the spaces they’ve left vacant. The job is to keep those spaces warm for when those things come back!