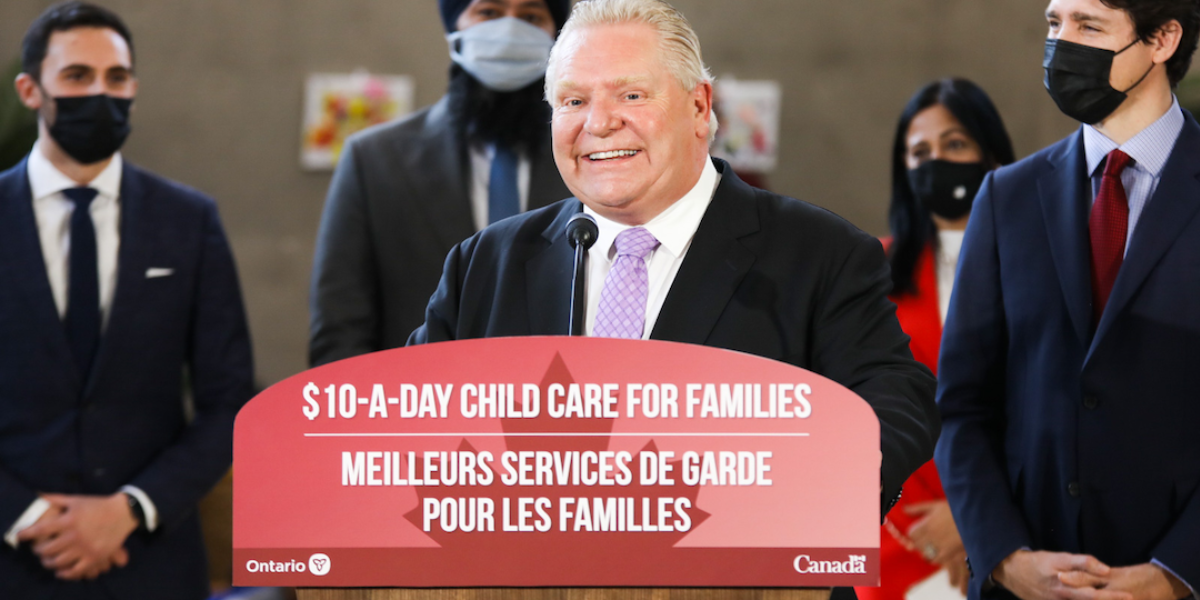 To encourage more childcare centres to sign onto $10-per-day childcare, Ford’s government has decided to remove profit caps and provide less oversight for for-profit operators, most of whom have refrained from opting into the deal so far.

Currently, Ontario is lagging other provinces and territories in signing up childcare operators to participate in Canada’s new national childcare program, largely because of the reticence of for-profit operators. This lag has meant that many Ontario families are currently waiting in limbo, not sure when they’ll receive reimbursement cheques for 25% of the cost of childcare fees or if their centres will sign onto $10-per-day childcare at all.

This is a problem that Ford created when he drove a hard bargain with the federal government last year, becoming an advocate for business by drawing out negotiations to ensure that for-profit operators would be eligible to participate in $10-per-day childcare and receive public money. “We have met with many for-profit operators and have fought for them every step of the way and will continue to advocate for them to the federal and municipal governments, so that all parents can benefit from these savings,” spokesperson Grace Lee wrote in an email.

The inclusion of for-profit operators runs counter to the original intent of the federal government’s Multilateral Early Learning and Child Care Framework, which stipulated that public money should be used to support non-profit and public operators.

Now, Ontario is saddled with trying to placate a pack of for-profit operators who are eligible to participate in $10-per-day childcare, but don’t want to play according to the government’s rules. These rules initially included requiring for-profit operators limit their profits while also being subject to government oversight into how they spend public money. Knowing that the primary prerogative of a for-profit business model is to maximize revenues, it shouldn’t come as a surprise that for-profit operators resisted signing onto the deal with these conditions in place.

Publicly, for-profit operators are claiming that $10-per-day childcare is a bad deal because it requires excessive and “patronizing” government oversight that involves the nickel-and-diming of every new toy and blanket. They also claim that the plan will bankrupt them because certain expenses are not eligible for public funding (e.g., rent, mortgage payments). To clarify, for-profit operators, like other businesses, are not opposed to receiving public money to serve the public, they just don’t want this money to come with strings or oversight.

For-profit operators claim that they just want to have the freedom to spend money to create a high-quality environment for children. But we should be skeptical of how they’ll accomplish this when, unlike non-profit and public operators, they’ll be diverting some of these funds towards profits, rather than reinvesting it back into the centre.

For-profit operators already have a track record of providing lower-quality care compared to non-profit and public childcare providers. Multiple studies have demonstrated that for-profit centres are overrepresented among lower quality centres with non-profit centres doing better on every measure of care–including children’s personal care, use of materials, activities and teaching interactions linked to language development, teacher interactions with children, and staff communication with parents.

A new reduction in spending oversight, alongside barring municipalities from using quality as an eligibility requirement, has meant that Ontario is increasingly giving for-profit centres the green light to use public money to achieve desired profit margins over providing quality childcare. This move can be contrasted with the way PEI and New Brunswick are regulating for-profit operators. Commercial operators in these provinces are also eligible to participate in $10-per-day childcare, but they are subject to quality, staffing, and fee rules.

For-profit operators also claim that they’ll become bankrupt if they sign onto the program since certain ongoing costs aren’t eligible for public funding, including rent and the repayment of loans. As an ad hoc solution, Ford’s government is creating two separate pots of money for operators: one for property taxes, rent, and mortgage payments; and the other for additional expenses including catering costs, cleaning, and buying new toys.

The widespread misuse of the Canada Emergency Wage Subsidy (CEWS) is just one recent example of how businesses, in the absence of sufficient government oversight, will use specific pools of money set aside for them, to increase profits, instead of using public money as intended. In this case, there have been 1,200 complaints of businesses using the CEWS to increase dividends to shareholders and executive pay, rather than support their business operations during the pandemic.

Money for childcare and wages, not profits

Instead of paying for-profit operators’ mortgages on properties they could sell at a profit, while creating another pool of money savvy operators could abuse and misuse, Ford should encourage these operators to convert to non-profit status in the short term, or ideally bring them directly under public management.

By removing profit caps and setting more money aside for for-profit childcare operators Doug Ford is undermining $10-per-day childcare. Ford is looking out for the interests of businesses who want to use public money without guaranteeing children quality care and decent wages for childcare workers.