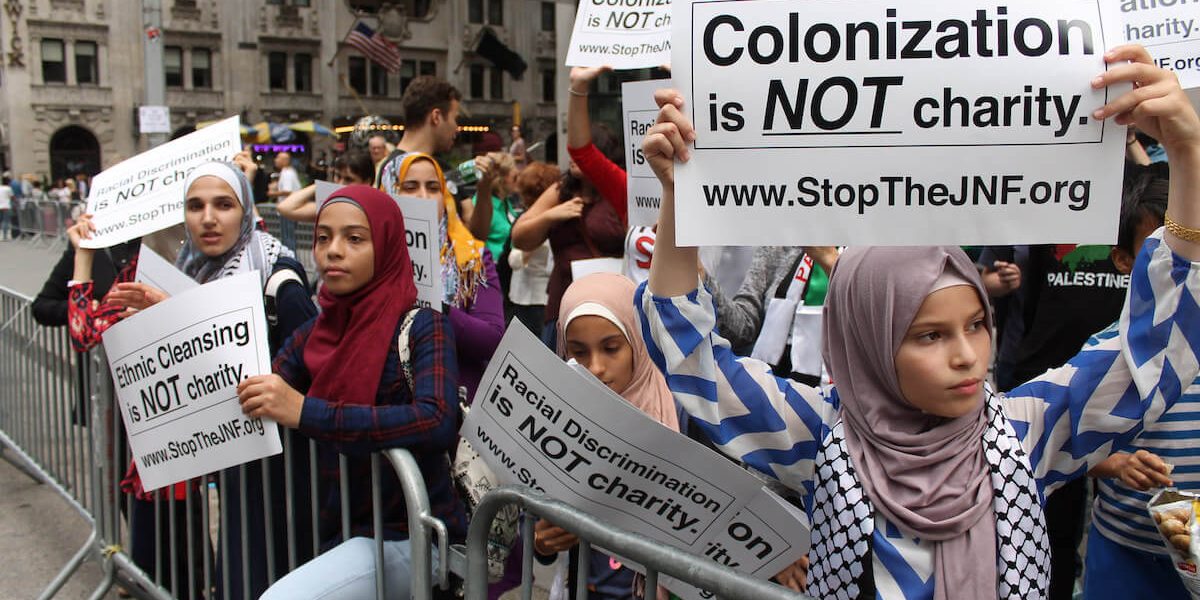 In a small but symbolically significant victory for pro-Palestinian and anti-racist forces, the Jewish National Fund of Canada has been forced to rebrand and distance itself from its Israeli parent organization.

Under pressure from Independent Jewish Voices (IJV) and others, the Canada Revenue Agency (CRA) instigated an audit of the JNF in 2018. The audit dragged on for over a year and there was never a formal announcement of its conclusion. But it is now clear the organization has been forced to make some changes.

According to Canadian law, charities should not be supporting racism. In fact, the CRA has a policy of promoting charities that support racial equality.

In a letter buried on its website, JNF Canada states: “the CRA has instructed us that it is a violation of Canadian policy to develop projects in the disputed [illegally occupied West Bank] territories. JNF Canada has gone on the record with CRA that due to this interpretation of Canadian foreign policy, we will not fund projects in the disputed territories.” The letter also announced a change in JNF Canada’s logo to differentiate it from its parent organization in Israel (KKL-JNF). Recently there’s been significant criticism of JNF-KKL’s announcement that it may buy land in the occupied West Bank (it has been doing so quietly for years). JNF Canada has removed “KKL” from its corporate name, and now claims its funds will no longer be “co-mingled with KKL’s general accounts”.

In control of 13% of Israel’s land – and with significant influence over most of the rest – KKL-JNF openly discriminates against the over 20% of Israelis who aren’t Jewish. Its website notes that “a survey commissioned by KKL-JNF reveals that over 70% of the Jewish population in Israel opposes allocating KKL-JNF land to non-Jews, while over 80% prefer the definition of Israel as a Jewish state, rather than as the state of all its citizens.”

The letter makes no mention of its discriminatory land-use policy, but JNF Canada has changed its explicitly supremacist twitter handle. Previously listed as “is the caretaker of the land of Israel, on behalf of its owners — Jewish people everywhere,” it now says, “the Jewish National Fund of Canada is Building the Foundations of Israel’s Future.”

Forcing changes on JNF Canada has been long in the making and has come at some cost for a number of individuals. For two decades activists across the country have picketed local JNF fundraising galas and Canadian campaigners have also benefited from many supporters in Palestine/Israel as well as the international Stop the JNF campaign.

Born in a West Bank village demolished to make way for the JNF’s Canada Park, Ismail Zayid has been complaining to the CRA about its charitable status for four decades. For years Lebanese Canadian Ron Saba has been “writing to various Canadian government departments and officials, corporations, and media to” denounce what he calls the “racist JNF tax fraud”. During the Liberal Party convention in 2006 Saba was widely smeared for drawing attention to leadership candidate Bob Rae’s ties to the JNF.

Saba has put in multiple Access to Information requests regarding the JNF, demonstrating government spying of its critics and long-standing knowledge of the organization’s dubious practices. Under the headline “Event you may want to monitor,” Foreign Affairs spokesperson Caitlin Workman sent the CRA a communication about a 2011 IJV event in Ottawa stating: “author of the Black Book of Canadian Foreign Policy, Yves Engler, will give a talk on Canada and the Jewish National Fund.”

At the Green Party convention in 2016, Corey Levine pushed a resolution to revoke the JNF’s charitable status because it practices “institutional discrimination against non-Jewish citizens of Israel.” The effort brought the issue into the mainstream though she, IJV and the entire Green Party were smeared as anti-Semitic by the media and violent Zionist organizations. Then in 2018, IJV and four individuals filed a detailed complaint to the CRA and Minister of National Revenue over the JNF.

While it’s outrageous that JNF Canada has been allowed to continue granting tax credits through its charitable status, it is significant to force embarrassing changes on a 100-year-old organization with powerful allies. In recent years Justin Trudeau, Stephen Harper, Irwin Cotler and other top politicians, as well as many titans of corporate Canada, have appeared at their fundraisers.

The campaign to revoke the JNF’s charitable status has always been about more than winning the specific demand. It draws attention to the racism intrinsic to Zionist ideology and highlights Canada’s contribution to Palestinian dispossession. At a broader level, there is a desperate need to question why Canadian taxpayers subsidize hundreds of millions of dollars in donations to a country with a GDP per capita equal to Canada. How many Canadian charities funnel money to France or Japan?

The no JNF campaign should not stop. Forcing the CRA to remove JNF Canada’s charitable status is a minimum demand. If Ottawa adopted the “S” demand of the Boycott, Divestment and Sanctions movement (BDS), it would be illegal for Canadians to support the JNF. That would be a major victory!