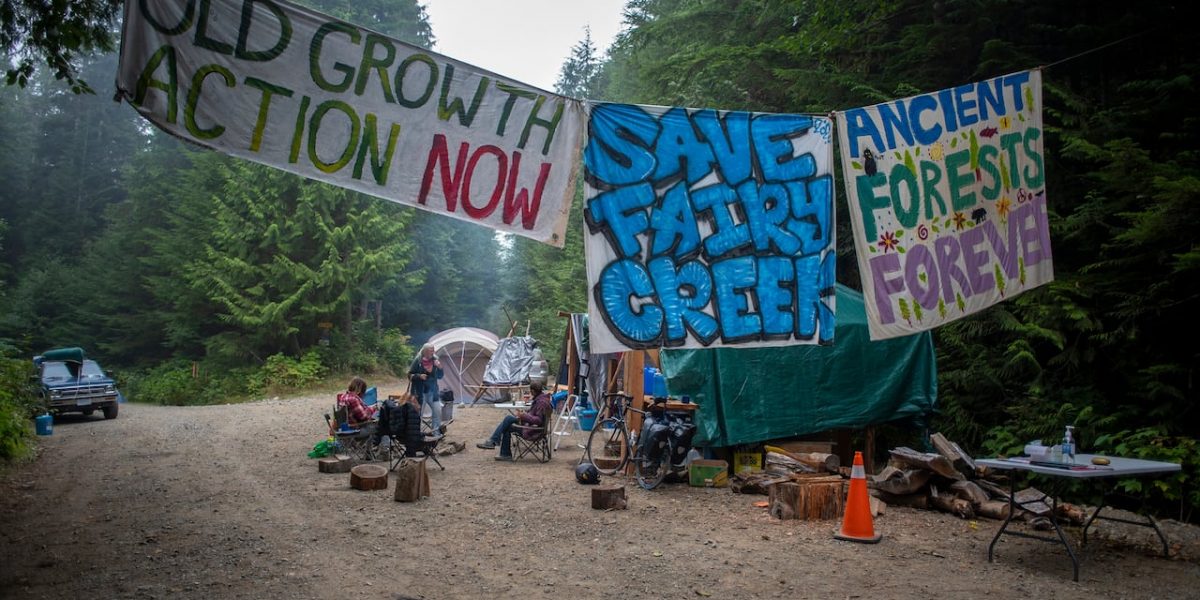 Home to some of the world’s last ancient forest ecosystems, BC’s old-growth forests are often seen as a cultural commitment to environmental protection. These systems support plants and animals, provide natural water filtration to wild salmon and communities, act as incredible carbon sinks and play a large part in BC’s tourism industry. These ancient forest ecosystems are vital and they are in danger.

According to a report done by the Sierra Club BC, around 3% of BC’s old-growth forests are able to support traditionally high levels of biodiversity. Due to continued intensive harvesting, only 2.7% of this 3% remains. “These ecosystems are effectively the white rhino of old growth forests,” the report says. “They are almost extinguished and will not recover from logging.”

As Pacheedaht elder, Bill Jones stated in April of this year, “currently and historically there hasn’t been any respect for our land, for the Pacheedaht and for all of our Indigenous lands and forests. This is indeed an oppressive system, whereby governments crush all hope and consciousness of its membership to the benefit of our political elite.”

The only way to protect these areas is to stop logging them immediately and to promote value-added second-growth logging and expand forest-supportive sectors (such as education, tourism, etc). This would ensure a more sustainable and equitable forestry practice while also providing jobs for forestry workers. BC’s Old Growth Strategic Review was created in order to provide the BC NDP with paths forward to manage forestry in ways that are sustainable and respect Indigenous rights, and was a key promise of their 2020 election trail.

It has only become more and more obvious that it is big business leading the charge.

“I will continue standing for the land until I am dead. I feel like an old growth tree is worth the same as my life,” said Jones. “I implore people to continue to stand with me to protect our forests from destruction and colonialism because we need allies on the ground to stop old growth logging in my home territory, and for my future generations and relatives.”

BC has a long-standing history with old-growth forest advocates, from historic Indigenous sovereignty efforts to the Clayoquot Sound’s War in the Woods. Since August 2020, a series of blockades have been set up in areas between Port Renfrew and Lake Cowichan, known collectively as the ‘Rainforest Flying Squad.’ The main logging companies in the area that are logging old-growth are Teal Jones and Western Forest Products. The surge in lumber prices this year, resulting from increased global demand, has meant these companies are recording record profits.

In early spring of this year, Teal Jones won a court-ordered injunction, enforced by the RCMP, against land defenders in the area. What followed was par for the colonial course in BC’s history. Legal observers as well as media were restricted into temporary exclusion zones, often without any paperwork or orders being presented. Arrests occurred without warning or provocation. Tarps were used to hide police activity while removing Indigenous youth from accessing their own territory, violating international law and even BC’s so-called adoption of UNDRIP.

The campaign itself has become immensely popular because of sustained organizing that has harnessed social media, utilized physical blockades, engaged in phone zaps, written letters to the editor and employed a myriad of tactics to shift the needle on the issue. Moreover, there has been a solid discourse regarding Indigenous land back efforts and decolonization. Those who believed that this movement is only about saving trees for ecological sustainability have now worked side-by-side with those sharing their lived experience, their own knowledge, and we’ve seen the campaign itself move from protecting a specific area of trees to a larger discussion around Indigenous sovereignty.

The Huu-ay-aht, Ditidaht, and Pacheedaht First Nations proposed a deferral of old growth logging in the Fairy Creek and central Walbran areas on June 6, which the NDP was forced to accept shortly after.

“For most of the past 150 years we have watched as others decide what is best for our lands, for our waters, and for our people,” reads the declaration signed by representatives from the three nations. “Our three sacred principles are often ignored. We are too often the last to benefit from what is taken out and the last to be asked what must be put back in. That time is over”

The deferral is for a two year period while the nations develop resource stewardship plans. The BC NDP-proposed deferral now protects 2000ha of old growth forests, which is roughly the size of five Stanley Parks. While there is certainly more work to be done in the movement as a whole, this victory should not be understated. The BC NDP showed again and again over the past year how little they care to listen to Indigenous voices as well as supporting land defenders. This reform was only won because of the dedication, education, and organization of activists from all over the province. It has sparked renewed calls from other nations from the government to respond and respect their own claimed forestry or other land-use deferrals.

On June 10, the Squamish Nation gave notice to the BC government to defer old-growth logging on 690,000ha of the Nation’s land.

“This call requires the Province to take meaningful action toward honouring its commitments regarding old-growth forest management, including the implementation of immediate logging deferrals and enabling the full participation of Indigenous Nations in these processes,” said spokesperson and Councillor Khelsilem.

Members of Wilp Git’luuhl’um’hetxwit, a house group of the Gitxsan Nation, have maintained watch over a gate that was installed in early May. The gate is in place to control access to the Lax’yip, or territory, and ensure any logging in the area is only done with consent from the house group. The government has said that this gate, located on the house group’s own land, is ‘unauthorized.

“We really want to make sure that the territory is protected for the future generations, and that it’s not clear cut in a single generation,” said Git’luuhl’am’hetxwit Wilp forestry spokesperson Denzel Sutherland-Wilson.

“Put it this way — our people had a relationship with this forest since the ice age ended and the big ice shelves receded,” said Kolin Sutherland-Wilson about Gitxsan. “Our people are buried across this territory. This dirt is our blood and bones.”

Keep up the pressure

The fight isn’t over yet. Land defenders and supporters are still active in the woods, at home, and at rallies. The victory of a deferral, as small a victory as it may seem, speaks volumes to the political and social power this movement has. It has also sparked a renewed call for the government to listen to other nation’s deferrals, and adds to the broader movement for land back and decolonization.

The BC NDP’s Old Growth Strategic Review and CleanBC have been shown to be a total and complete failure by design. The government itself has subsidized the oil and gas industry more than the previous Clark Liberal government. The Stand.Earth study found that “In 2020-21, BC’s NDP-led government spent $1.3 billion on fossil fuel subsidies — 8.3 percent more than the previous year — and they are now more than double what they were when Premier Horgan’s NDP took power. Rather than decrease over time, these subsidies are estimated to surpass $1.8 billion in 2023-24—more than triple what the B.C. Liberals spent in 2016-17.”

We have forced John Horgan and the BC NDP to listen and act, so let’s keep up the pressure. from old-growth to fracking, from CGL to indigenous rights, we can win.

To support the Rainforest Flying Squad and Fairy Creek efforts, please consider donating to help cover legal fees and other costs, contacting your MP and MLA, following frontline channels, and joining any solidarity actions or groups in your area