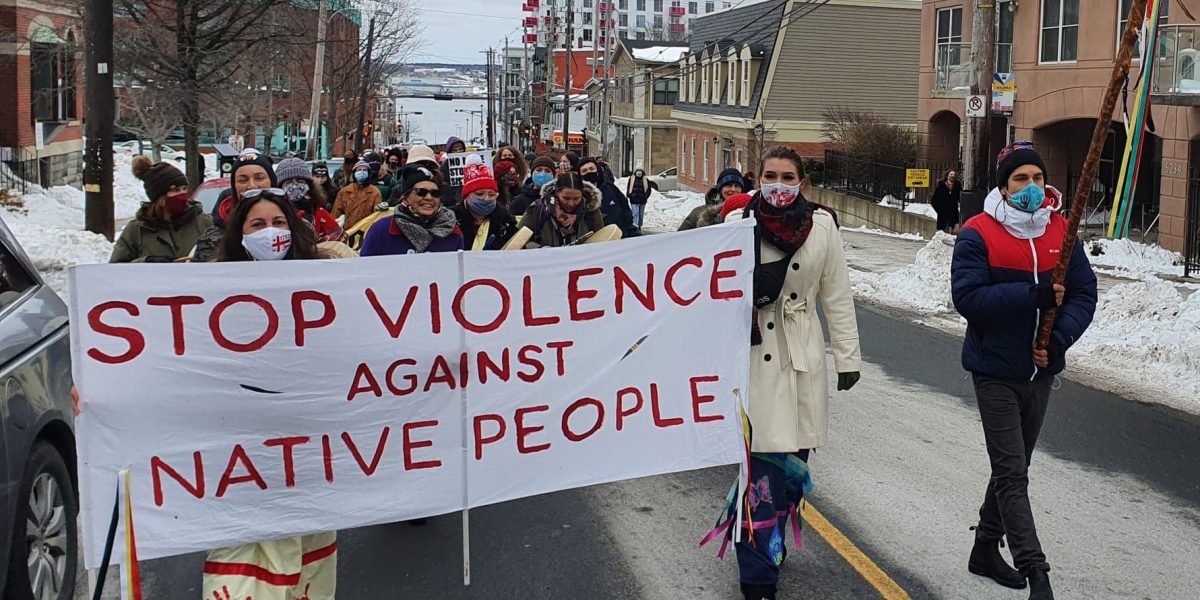 About 200 people gathered at the Peace & Friendship Park in Kjipuktuk/Halifax on Sunday afternoon for the first annual Kjipuktuk March for Missing and Murdered Indigenous Relations (MMIR).

The event was organized by Thunderbird Swooping Down Woman, also known as Darlene Gilbert of Annapolis Valley First Nation, as well as Naomi Bird and Masuma Asad Khan.

They stated that the March was held “to honour and remember the Indigenous women, girls, Two-Spirit, and other Indigenous relations that have been taken from us in the ongoing genocide.”

The Peace & Friendship Park was chosen as the starting point of the March for its historical significance. “We chose this because this is where the statue of Edward Cornwallis used to be placed,” Thunderbird Swooping Down Woman said.

Cornwallis was a British military officer assigned to establish the town of Halifax in 1749. He committed brutal atrocities against Mi’kmaq communities, including the issuing of a ‘scalping proclamation’ paying settlers to kill Mi’kmaq people. After years of grassroots pressure, the statue of Cornwallis was removed in January 2018 and ‘Cornwallis Park’ was renamed ‘Peace & Friendship Park’ in July 2020.

The march coincided with the 30th annual Women’s Memorial March in the Downtown Eastside of Vancouver, British Columbia. That march was started by Indigenous women in the early 1990s, and similar annual marches have since been held in over 20 other cities across Canada, which now includes Kjipuktuk/Halifax.

Organisers of the Kjipuktuk March for MMIR noted that MMIR (relations) was used instead of MMIW (women) “to consider those in our communities who live beyond the confines of the gender binary.”

MMIR refers to a national crisis where Indigenous people who are not men experience levels of violence and state neglect that amount to genocide. Grassroots Indigenous organisations responded to the crisis by pressuring the Government of Canada to establish the National Inquiry into Missing and Murdered Indigenous Women and Girls.

The Inquiry was formally established in 2016 and released its final report in June 2019. The report included 231 recommendations, and it concluded that the violence inflicted upon Indigenous people amounts to genocide. In June 2020, one year after the report’s release, the Native Women’s Association of Canada denounced the Government of Canada for its lack of action on the Inquiry’s findings.

The March occupied downtown streets and concluded at the Halifax Public Gardens, where Indigenous women took to the bandstand to give speeches and lay out red dresses and red ties in commemoration of Indigenous people who have been murdered or gone missing.

Thunderbird Swooping Down Woman addressed the crowd gathered around the bandstand, “We call upon the Government of Canada to not only acknowledge the fact of genocide of the original peoples of Turtle Island, but to work toward the changes that need to be made.”

Amanda, a Carrier and Cree Two-Spirit person, told the crowd that to be in solidarity with Indigenous people in Canada means joining the call to defund and abolish the police.

Dorene Bernard, joined by her grandson Tyus Bernard, led a prayer and gave her remarks. Bernard reflected on the lives of Mi’kmaq people that have been taken: Brady Francis, Carl Bernard, Cassidy Bernard, Chantel Moore, Loretta Saunders, Rodney Levi, and Tanya Brooks. Bernard finished by saying that it is up to all of us to fight for justice for the next seven generations.

“These white people think this country belongs to them – they don’t realize that they are only in charge right now because there’s more of them than there are of us. The whole country changed with only a handful of raggedly-ass pilgrims that came over here in the 1500s. And it can take a handful of raggedy-ass Indians to do the same, and I intend to be one of those raggedy-ass Indians.”