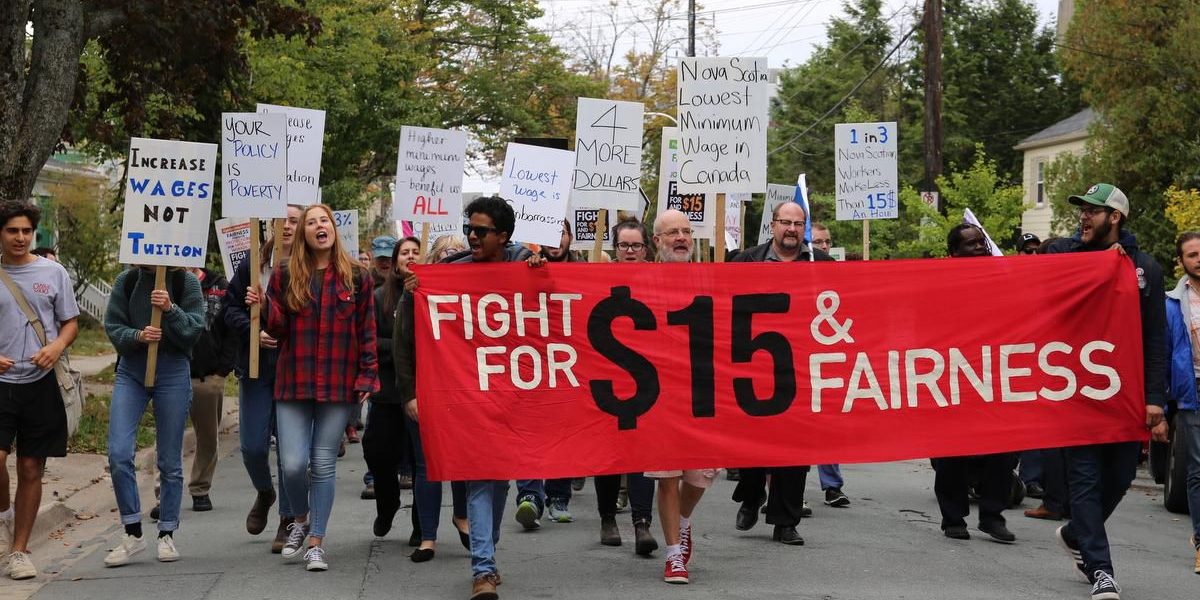 Precarious, low-wage, and unfair work is on the rise in Atlantic Canada, along with the cost of living, making day-to-day life challenging for many workers in Nova Scotia.

When compared with labour standards legislation in other Canadian provinces, Nova Scotia has clearly fallen behind. Provisions pertaining to standard hours of work, overtime pay, vacation, and statutory holidays, are especially weak. With one of the lowest minimum wages in the country, many are struggling to survive.

The Fight for $15 and Fairness campaign is a movement across the country committed to bettering the lives of workers through improvements to labour standards. The campaign’s fierce and unwavering belief that workers deserve better has won numerous gains across the country, including increases to provincial minimum wages, as well as paid sick days, protection against contract flipping, and fairer scheduling practices. While rooted provincially, the campaign put pressure on federal parties to echo its demands.

During the recent federal election, NDP leader Jagmeet Singh committed to implementing a federal minimum wage of $15 per hour. On September 1 the Liberal government made several amendments to the Canada Labour Code, including equal pay for equal work, fairer scheduling practices, paid sick days, and increased vacation time. While only impacting a relatively small amount of workers (roughly 6% of workers are federally regulated), these wins at the federal level now mean that at least some workers in every province are entitled to paid sick days and equal pay for equal work. This cuts against the notion that introducing these reforms at the provincial level are somehow unprecedented, a line that Doug Ford used frequently in 2018.

The vast majority of Canada’s workforce remains dependent on provincial labour legislation. By putting pressure on provincial governments, the $15 and Fairness campaign has achieved gains for workers across Canada, including in Alberta and Ontario–the two provinces with the highest minimum wages.

Under Conservative governments, however, labour standards are under threat. In the interest of the Ontario business community Doug Ford and Tory government brought in a number of changes to scrap some of the reforms in the Fair Workplaces, Better Jobs Act, 2017, the progressive labour legislation designed to address the changing workplace environment.  Among other provisions, the promise of a $15 minimum wage, employment status pay equity, and paid personal emergency leave were lost, leaving workers in Ontario more vulnerable to the harms that the legislation attempted to combat.

The movement in Nova Scotia

Halifax’s own Fight for $15 and Fairness chapter is adamant about the need for better worker protections, and is putting pressure on the provincial government to make the necessary legislative changes. With direct involvement from low-income and precarious workers in Halifax, this local chapter has tailored its organizing efforts to both suit, and include, those most vulnerable.

Hailie Tattrie, a Masters student at Dalhousie University and active member of Halifax’s Fight for $15 and Fairness chapter, believes that the campaign has enormous value in the fight for needed change, both in the workplace and beyond. “The movement is so important,” she says.  “People in Nova Scotia deserve much better, and we are drawing needed attention to this fact.”

From a working class family in rural Nova Scotia, Tattrie says that the campaign is close to her heart. “I have seen what it is like to live paycheque to paycheque, and how hard that can be for families especially,” she says.  “My family has instilled in me a strong sense of social responsibility, which means fighting for your own rights and for the rights of those who are even more vulnerable than you are.”

Tattrie says that the grassroots labour movement has given her a strong sense of community.  “I’m still relatively new to Halifax, and I am grateful that the Fight for $15 and Fairness campaign has positioned me within a strong network of like minded people,” she says. “It is comforting to work with individuals who have similar views to mine, and to fight together for a cause we all believe in.”

By building relationships with other workers, Tattrie says that the movement has led her to link labour issues with other political initiatives. “I see friends and fellow activists at political events across Halifax, fighting for causes such as climate justice and improved housing conditions,” she says. These interactions create camaraderie.  “We are able to collaborate on a wide range of issues, learn from each other, and see how the topics we are passionate about are so closely related.”

The connections and conversations on the left are not the focus of the campaign. Organizers see the campaign as a tool to build a movement of workers, that will empower people to take action in their own communities and workplaces. Tabling events, public petitions, and rallies allow organizers to connect with the broader community. “Public initiatives make us visible to working class people, some of whom may be less politically active, but are none-the-less impacted by the poor working conditions we oppose.”

For some, the conversations that arise are enough to inspire direct involvement. “When they see the work we are doing, it reinforces the notion that things, right now, could be better.  Many feel that it is a cause worth fighting for.”

Labour conversations are ongoing for organizers in the Fight for $15 and Fairness campaign. “I discuss labour concerns with my friends, family, and co-workers, and try to engage them in discussions about workplace injustice.” Through conversation, people begin to expect more of their workplaces and of the government that regulates them, Tattrie observes.

At times, however, conversations are more difficult and the movement encounters skepticism and even resistance. “Working with likeminded people is easy, but challenges can arise when you are speaking with those who may be undecided, or who may assume negative outcomes will result from a minimum wage increase and improvements to labour standards legislation”.

When met with opposition, knowing the economic benefits of the aspired changes is helpful. “I explain that, right now, Nova Scotians are unable to keep up with the cost of living. Putting money in people’s pockets will help the local economy, which can in turn create jobs.” When workers are better financially positioned, they can make for more committed employees, too. “However, if people are unable to make ends meet and live comfortably,” Tattrie says, “they are bound to feel tired and disengaged at work”.

Another challenge that the organization faces is maintaining commitment from volunteers, many of whom are left exhausted from their own employment. Poor working conditions can therefore hinder the strength of a working class movement.

As a graduate student with a flexible schedule, Tattrie feels fortunate to be heavily involved. “In a capitalist society, not everyone has the time, resources, or energy to participate. People wake up, go to work, come home, eat dinner, and go to bed,” she says. “I feel that I must to use my time, resources, and energy to fight for people who don’t have it yet.”

The biggest challenge of all, Tattrie says, is convincing workers that these improvements are possible. “People are so discouraged. Sometimes, even leftists question the feasibility of what we are asking for,” she says. “Workers today expect so little, so we need to take time to explain that change can happen in Nova Scotia, and why it is necessary.”

She also notes that people often forget the “fairness” component of the organization. “This isn’t just about raising the minimum wage”, Tattrie says. “A lot of workers don’t realize the inadequacy of our labour laws until we point out the rights that workers in other provinces have achieved.”

While the campaign’s mission is to help all workers, it acknowledges that some workers are more vulnerable than others. “The campaign is intersectional”, says Tattrie. “Studies show that people of colour, women, the queer community, and migrant workers, for example, are more likely to encounter discrimination and abuse at work, including at the hiring stage.” The campaign remains mindful of the ways in which work is different, and harder, for certain groups and individuals and involves them in the fight for legislation that will properly address their needs.

Tattrie’s involvement in the Fight for $15 and Fairness movement has changed the way she reflects on her own employment. “Looking back, there were jobs I had where myself and my co-workers didn’t know what we were entitled to regarding pay, breaks, and more.”

Today, on the other hand, Tattrie feels empowered by her knowledge of her workplace rights, and is enthusiastic to share that information with her co-workers. “This knowledge can help prevent workplace abuse, and hold employers accountable. Legal education is a big part of what we are striving for.”

Connecting organizers in the fight for improved working rights, the $15 and Fairness campaign is establishing relationships between non-unionized and unionized workers. In Nova Scotia, labour relations have been soured by Premier Stephen McNeil, who has attacked union rights and failed to raise the very weak employment standards in the province.

Equipped with resources and funding, unions are able to support the grassroots movement, while challenging the right-wing notion that unions are motivated by self-interest. Likewise, as the standards of non-unionized workers are raised, unions will have more leverage at the bargaining table.

“The $15 and Fairness campaign helps raise expectations amongst the working class to fight for better wages and more respect in the workplace” says Darius Mirshahi, union organizer for SEIU, Local 2. “This helps workers in unionized workplaces gain the confidence to be more bold in their demands. It helps non-unionized workers to rally their co-workers and get organized to win improvements as well, sometimes through successful unionization drives.”

As for the future of the movement, Tattrie says that growing capacity is a priority. “You can’t underestimate the power that comes in numbers,” she says. “Through petitioning, rallying, and tabling at local events, we hope to garner more support and involvement. This will help raise awareness, and hopefully place adequate pressure on the provincial government.”

Through the Fight for $15 and Fairness campaign, organizers like Tattrie will continue to demand improvements to labour standards in Nova Scotia until the necessary changes are won. “While I do make more than minimum wage now, I will continue to fight for everyone in the province, because they deserve better, too.”