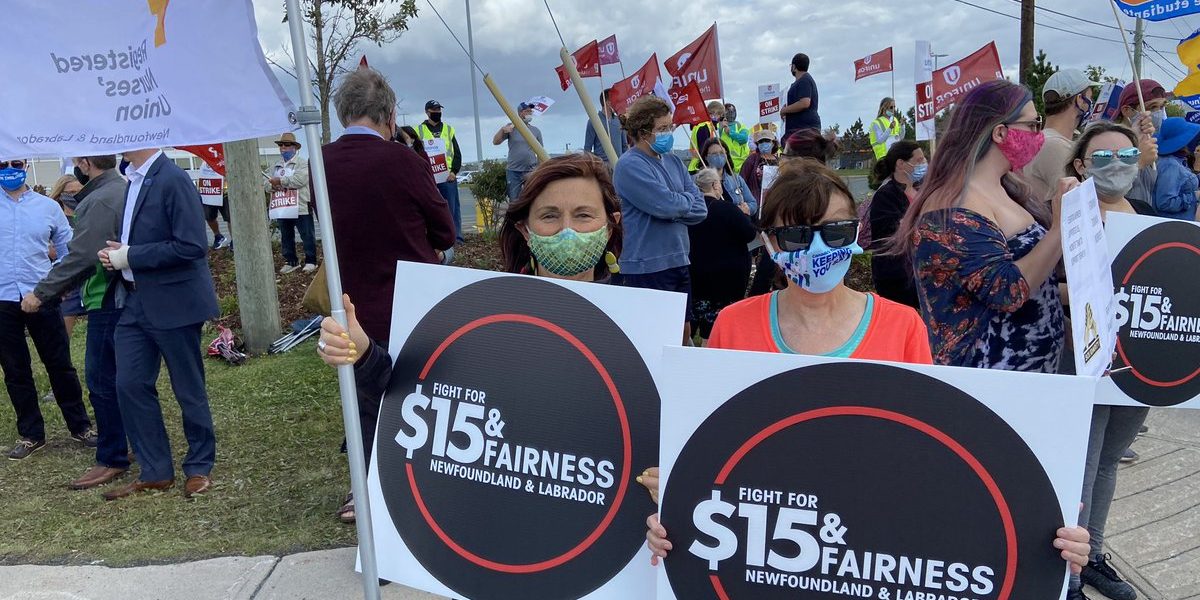 Newfoundland and Labrador has the fourth lowest minimum wage in Canada. Two-thirds of people across Canada live in a jurisdiction with a minimum wage at least $2 an hour more than ours. This wage disparity negatively impacts people in our province in a number of significant ways.

The preventable costs of poverty wages

In 2019, 48,900 workers earned $15 an hour or less in Newfoundland and Labrador. Twenty-three percent of our workforce – one in four workers – provides labour to an employer for a wage that traps them in poverty. If you work full-time in St. John’s for minimum wage, it costs 60% of your pay to rent a one-bedroom apartment–double the widely-accepted 30% benchmark.

According to the World Health Organization, income is the number one social determinant of health. Perhaps it shouldn’t be all that surprising that Newfoundland and Labrador has the worst health outcomes, despite having the highest per capita health care expenditures of all provinces. Income is also the biggest contributing factor in food insecurity. This province has the highest rate of food insecurity in the country, and the majority of those who are food insecure depend on employment income.

Women are disproportionately represented among minimum wage workers in Newfoundland and Labrador, and we have the highest gender wage gap in the country. Our poverty-level minimum wage is trapping many women in situations of intimate partner violence.

All this is intentional government policy. Section 30 of the Labour Standards Act requires the provincial government to “review the regulations respecting the minimum wages payable by an employer to an employee” every two years.  In other words, every two years our elected representatives – paid a base salary of over $95,000 – have the opportunity to end the unjust exploitation of a quarter of our workforce. Every two years they just choose not to.

Low wage workers do not have the same access to politicians as the big business lobby. Without the consistent advocacy of the labour movement and social justice groups like Common Front NL and the Fight for $15 and Fairness NL campaign, lobby groups like the St. John’s Board of Trade, Newfoundland and Labrador Employers Council, Atlantic Chamber of Commerce, Restaurants Canada, and Canadian Federation of Independent Business would have their way, and our minimum wage would actually be lower and further entrap our residents in poverty.

In submissions to the 2019 Minimum Wage Review Committee, not only did these organizations oppose any increase to the minimum wage other than annual increases tied to the Consumer Price Index, they wanted new lower minimum wage categories for liquor servers ($1.50 an hour less) and new hires ($1 an hour less for the first 500 hours of employment). They also wanted Section 30 of the Labour Standards Act repealed. Let that sink in for a moment.

What gets lost in all the apocalyptic fearmongering is that a $15 minimum wage would actually be good for local businesses and the economy as a whole. Studies show that businesses employing minimum wage workers benefit financially from less staff turnover and absenteeism, higher productivity, and improved customer service. They would also benefit from tens of millions of dollars in the hands of our lowest income earners, who would spend it in the local economy.

And a higher minimum wage is not the job-killer it is made out to be. The three provinces with minimum wages of $14/hr or more have significantly higher labour participation rates and lower unemployment rates than Newfoundland and Labrador.

All rational arguments aside, at the heart of any discussion around a higher minimum wage is a moral question that goes beyond economic data and statistics. Do we, as a society, accept that there are people in our province who work full time for wages that trap them in poverty? A recent poll indicates that we do not: 91% of Newfoundlanders and Labradorians support a $15 minimum wage. Support is up from 87% in 2018, largely due to the pandemic opening our eyes to how essential many of our minimum wage workers are.

Not only is a $15 minimum wage good economic and social policy, it is also an incredibly popular political policy. Yet, as we find ourselves in a provincial election, only two of four parties have declared their support for a $15 minimum wage by 2022 – the NDP and the NL Alliance Party.