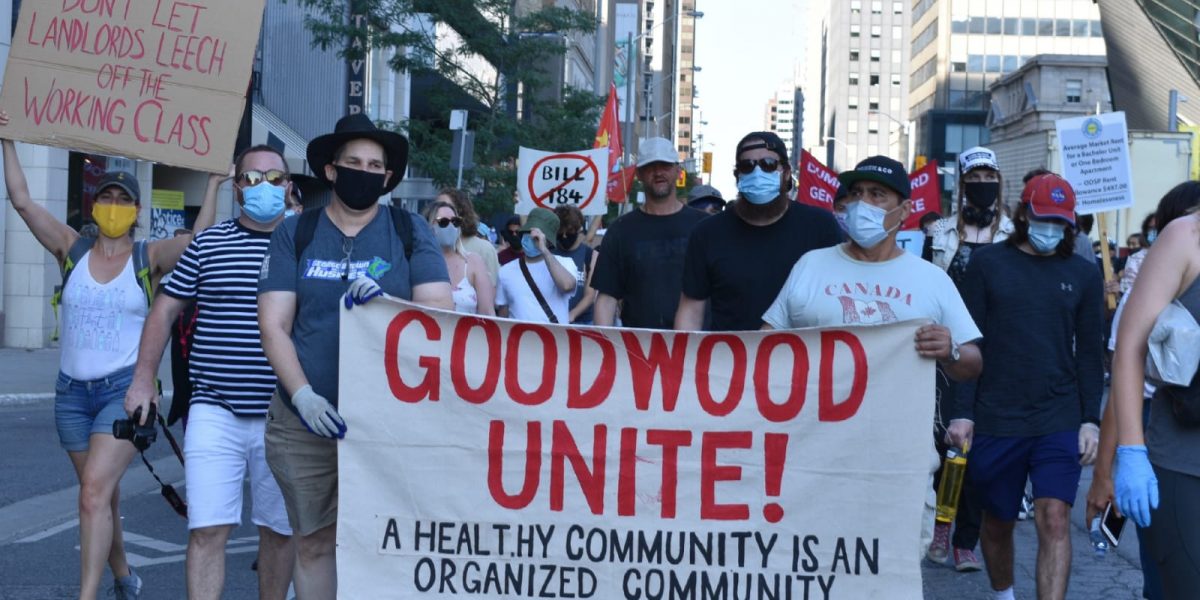 The August 1 rent deadline has come and gone, and already September 1 is looming. Over the past five months the global pandemic has caused mass unemployment leaving many families in a state of insecurity. While at the beginning of March the Ontario government put in place an eviction moratorium, the eviction ban has now been lifted and the Landlord Tenant Board (LTB) is open for business.

However, the pandemic is not over, jobs have not returned, and CERB is soon ending. All three levels of government are aware of this reality, yet they stand silent and complicit against with landlords clamouring to race to the LTB to displace thousands of people from their homes. While the term “evictions” may give liberals some comfort that there is a bureaucratic system in place that could insinuate fairness, yet when landlords, politicians, and employers  support each other to gain maximum profit, “fairness” is a mere illusion. Landlords are going after people’s homes, and politicians are enabling it to happen. Many will become homeless at a time when COVID-19 still lingers. These are not evictions, this is displacement and this means war.

The housing crisis existed long before COVID-19. With minimum wage at $14/hour and the average one bedroom costing over $2,000/month in Toronto, even a person with a full time job could not afford to rent an apartment. This does not take into account undocumented workers, making less than minimum wage or that many companies, such as Sobeys, schedule their employees to work less than 30 hours a week so they can avoid providing benefits. This reality has forced families to work multiple low paying jobs while corporations profit off their desperation to make rent payments.

It’s a cycle that has fed the rich: employers fighting to keep minimum wage low, politicians complying, and landlords who raise and maintain exorbitant rent results in keeping the threat of homelessness always looming and the people who are impacted the most, are too busy working multiple jobs to be able to fight the system. When people decide to fight the system, landlords are quick to find ways to evict and punish them. This system demands that the working class submit to capitalism or face reprisals. Prior to COVID-19 landlords, employers, and politicians created a system designed to keeping certain populations expendable and exploitable.

The eviction moratorium during COVID

At the onset of the COVID-19, Toronto prepared for lockdown, knowing that thousands of people would be laid off. Within a month unemployment skyrocketed. While the federal government provided people with an emergency benefit, CERB, the $2000/month still could not cover rent and food for families, and many people didn’t even qualify for the benefit. At the same time, Doug Ford put a moratorium on evictions and declared, “If you have a choice between putting food on your table or paying rent, you’re putting food on your table. The government of Ontario will make sure that no one gets evicted. We stand by that and we’re gonna make sure we take care of those people.”

Thousands of people were forced into this decision, many did not pay rent. Instead, they chose food and medication. Even when landlords knocked at tenants’ doors demanding the last amount from families bank accounts, these tenants stayed firm demanding their dignity be upheld.

Ford’s words were never backed by legislation. So while he told people to not pay rent, five months later he lifted the moratorium on evictions and brought forward Bill 184 which expedites the eviction process. The bill, which encourages landlords to negotiate repayment plans, has some tenants now being told they must pay over $2,000/month for their unit while still being unemployed. This is not at a repayment plan, this is an eviction plan. Ford had the opportunity to cancel rent back in March, yet he chose hollow words that transformed into tyrannical repayment plans.

Evictions are good for landlords. While a one bedroom apartment can cost upwards of $2,200/month, for families that have been in an apartment for 10 years, their rent may still hover around $1,300. If someone paying this lower rent is evicted, this means the landlord can now rent the apartment for $2,200 – a $900/month increase and increasing profits by over $10,000/year. This increase is only based on one eviction, on one unit in a building of hundreds of units. With the province’s help, landlords are set to profit off the pandemic while displacing thousands.

Landlords in the city have already filed over 6000 eviction claims which could make tens of thousands homeless. If tens of thousands of people become homeless, it will exacerbate an already overcrowded shelter system where people are already being forced into encampments, encampments that are routinely raided and removed by the city. Cold weather is coming, and begs the question ‘where will people live?’ Meanwhile the threat of COVID-19 is still a reality. Having a place to socially distance is critical to surviving the pandemic, so denying people this option and forcibly removing people from their homes and into the streets, will be a death sentence for some – a death that would otherwise be avoidable. Landlords’ rush to eviction combined with the complicity of all three levels of government, will kill people. It is an act of war.

To put it in a different context: every day in Palestine, Palestinians face checkpoints, harassment, displacement, imprisonment, and night raids by the Israeli Military. This constant colonial oppression is met with resistance – rallies, protests, lobbying, and the BDS Movement – both in Palestine and around the world. Yet, when Israel bombs Gaza, this is an act of war and tactics and urgency need to shift and change. The response from Palestinians and the international community will shift. They will meet their attacker and fight back. This is the reality we are facing in Toronto today.

It is important to be clear, working class tenants across the city have been fighting against this system before and during the pandemic. Tenants have been organizing, showing solidarity with their neighbours, planning rallies, demanding support from politicians, protesting outside of landlords’ homes, hosting press conferences, disrupting politician ribbon cuttings and going toe-to-toe with the police unafraid. Working class tenants are fighting back and they are not backing down. In a recent press conference outside of John Tory’s condo, Samuel Nithiananthan vowed:

“If the city does nothing, we are not going to wait for our saviours to come through. What we are going to do is stand up for ourselves. If there is a sheriff at the door of any tenant in neighbourhoods that are organized, we will be there with them. Neighbours will stand shoulder to shoulder with each other to ensure that evictions don’t happen…what we are willing to do is protect our neighbours and whatever we have to do, to do that, is what will happen.”

The structure of oppression and exploitation of the working class existed in Toronto long before the pandemic. The precarity the working class is facing, is not a result of the pandemic, but designed by governments, employers and landlords. Landlords, with the government support, is seeking to profit from the pandemic by displacing tens of thousands from their homes – this is war. To landlords and politicians in this city you have been warned – there will be resistance.