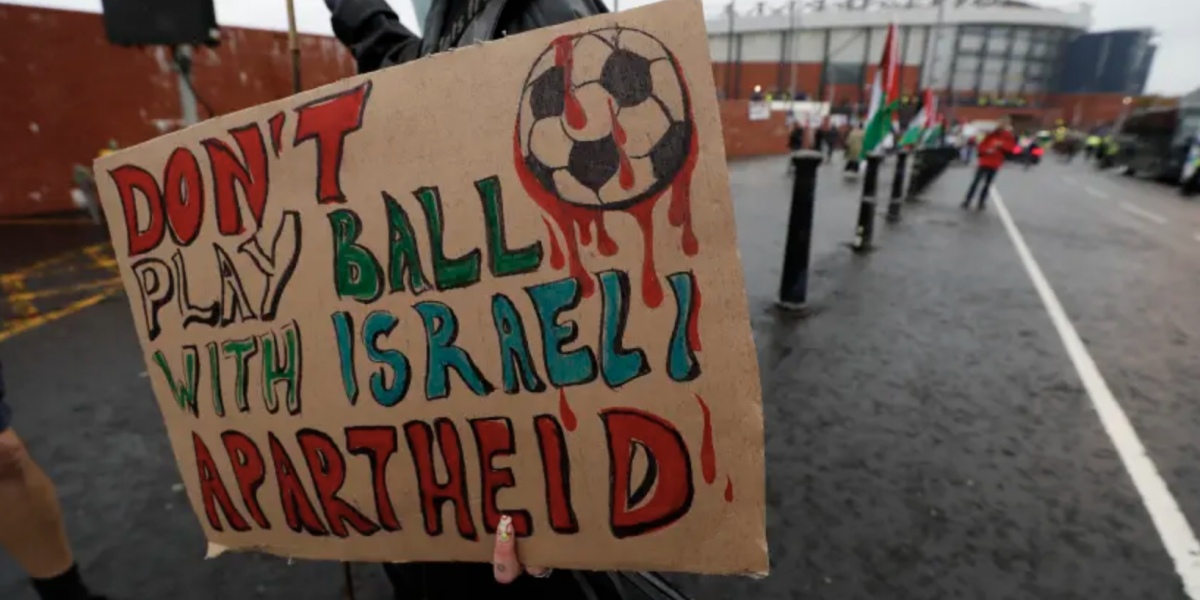 In less than 50 days, the 2022 World Cup will be underway.It is being hosted by Qatar, the first time FIFA has been hosted by an Arab county, so there has been much excitement since it was first announced in 2010.

Over 3 million are expected to attend the event, to watch 32 teams compete between November 20 and December 18.This includes Canada who plays on November 23 against Belgium before facing Croatia on November 27 and Morocco on December 1.

As we celebrate the excitement of the World Cup, it’s important that we take action to draw attention to Israeli apartheid and its attempts to “sports wash” its image, and that we build solidarity for all Palestinians including soccer players.

Israel’s apartheid regime severely restricts the freedom of movement of Palestinians on their land, including soccer players. As Palestinian soccer player Fadi Jaber explained, “The Palestinian footballers from Gaza are oppressed. We are part of the Palestinian people, and we are subjected to the restrictions that Israel imposes against us.”

Israeli apartheid towards that specifically target Palestinian soccer players include:

A) The Israeli Football League (IFL) allows players, and even five clubs from the illegal Israeli settlements (legally under the jurisdiction of Palestine), to play in their national league without first obtaining permission from the Palestinian Football Association (PFA). This is a straightforward violation of FIFA regulations that must be addressed.

B) Israel, by means of its military administration and control of the Occupied Palestinian Territories, has taken a number of measures that harm the sport of football including:

C) That we object to the prevalence of blatantly racist sloganeering (“Death to Arabs”) and anti-Arab violence associated with IFL games. This runs counter to FIFA’s stated goal of confronting racism.

The Israeli government urged FIFA to open a consulate for the duration of the FIFA World Cup, hoping to keep the office open after the World Cup as part of the Israeli normalization plan with Arab states. The 2022 World Cup 2022 is very much part of a “sports washing” exercise–using sports to sanitize its image, and deflect attention from its apartheid policies– even as Israel did not qualify to play. But a few weeks ago, Qatar rejected Israel’s demand.

Israel has violated the principles of FIFA in a variety of ways that would normally warrant disciplinary actions and even a suspension of its membership. However, the politics of FIFA have prevented the organization in the past from taking such action. Its internal by-laws have even been amended to make it more difficult for the Palestine Football Association (PFA) to demand such action. Consequently, it is now the responsibility of civil society to apply the popular pressure necessary to bring this about.

That is why on May 28, 2022, Just Peace Advocates with Friends of Sabeel North America launched “FIFA: Suspend Apartheid Israel.” This included a webinar with, musician & activist Roger Waters, former head of the legal unit of the Palestinian Football Association Gonzalo Boye, cofounder of Al-Haq Jonathan Kuttab, and Rizek Salah the honorary head of the Khader Football Club. Over 70 organizations and hundreds of individuals  sent a letter to FIFA president Infantino and secretary general Samoura concerning a serious breach of FIFA’s own statutes as they relate to human rights, anti-discrimination, and equality for the promotion of football in a globally accessible and unifying manner.

Suspending Israel would also be consistent with FIFA’s other recent actions. On Friday, July 15th the Court of Arbitration for Sport (CAS) upheld the decisions by UEFA and FIFA which exclude Russian national teams and clubs. Following this 1400 people wrote to UEFA President Aleksander Čeferin concerning the double standard taken by UEFA in regard to Russia and Israel.     This included indicating that beyond the regular games, teams in France, Italy, the UK, Spain and other member associations of the UEFA continue to accept sports washing invitations by Israel with games scheduled in late July in Tel Aviv and Haifa. The Juventus – Atletico Madrid August 7 game at the Bloomfield Stadium was canceled citing “security concerns” due to Israel’s bombing of Gaza, leading one to wonder if they were afraid of backlash of playing during Israel’s assault on Gaza. The UEFA has not responded to the letters it received.

There’s also pressure building around the world against local teams playing Israel. Earlier, the Argentine national football team cancelled a scheduled June 6 match against Israel at the Sami Ofer Stadium in Haifa after local and international pressure.On May 30, 2022, solidarity groups in Uruguay launched the campaign Uruguay, No Vayas! (Uruguay Don’t Go!) to ask the AUF (Asociación Uruguaya de Fútbol) and the Uruguay men’s soccer team to not accept the invitation from the State of Israel to carry out the final phase of preparation for the World Cup in that country and/or play a friendly match, on their way to Qatar.

On May 30, 2022, during the webinar “FIFA Suspend Israeli Apartheid” Roger Waters told the Uruguay Team – don’t do it. Don’t train or play any matches in Israel. 30+ organizations from around the world–including the US, Canada, Europe, UK, Africa, Palestine and elsewhere–joined the call to say, “Uruguay Don’t Go.” We wait for more news on whether Uruguay will go to Israel.

Palestine solidarity at the  2022 World Cup

The New Arab shared on September 26 that activists on social media are calling on Arab teams taking part in the 2022 World Cup to show support for Palestine, in a similar way to European and other teams have expressed support for Ukraine. There is a growing call for wearing arm bands in support of Palestine and to challenge FIFA double standards.

The demand that is made as we approach the World Cup in Qatar next month, and in Canada in 2026 is that: FIFA must suspend the Israeli Football League.

So, with less than 50 days until the World Cup, what plans do you have to speak out in solidarity with Palestine?

Your World Cup viewing party could include Palestine flags, and arms bans showing solidarity with Palestine. You could join in social media  raising awareness as we approach kick off day in Qatar.

You could join in saying #KickOutApartheid as Canada ramps up its own preparation for the 2026 World Cup being held in Toronto and Vancouver.If you are interested in learning more and joining in holding FIFA and its affiliates accountable be in touch HERE.