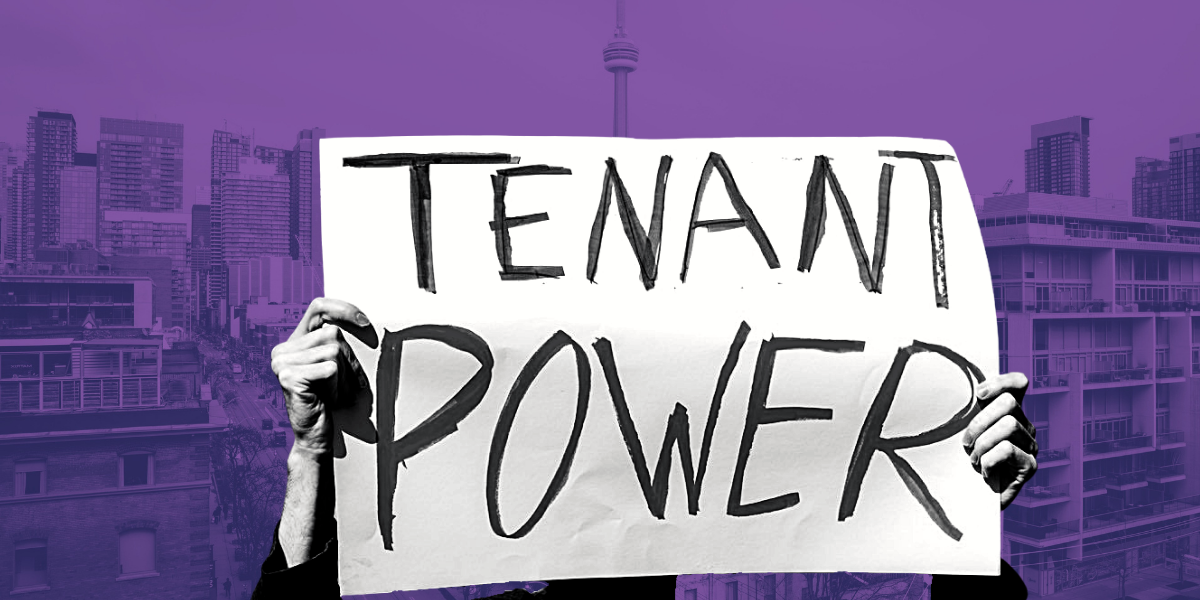 The housing market has become increasingly hoarded and monopolized by capitalists doing everything in their power to extract as much as they can from as many as they can. For the average worker there will be two capitalists in their lives holding power over us – our boss and our landlord. The most effective way for workers to resist the extractive nature of bosses and gain better pay and working conditions is to collectively demand it.

The one thing all businesses have in common is that they can’t generate profit without labour, and withholding that labour as a group allows workers to demand what we’re entitled to (everything!). Similar to labour organizing, tenant organizing can materially help the working class. Resisting bad faith evictions and renovictions are important organizing efforts to keep people in their homes, preserve more affordable housing stock, and resist the gentrification and displacement of communities.

Landlords and bosses: two sides of the same capitalist coin

Bosses monopolize the means of production to extract value from workers, and landlords monopolize housing to extract value from tenants. We can’t rely on the legal system to keep us in our homes or keep housing affordable, because the laws are not written by workers or tenants. On the other hand, roughly one third of Liberal cabinet ministers own investment or rental property, and we can see the direct result of their laws.

In Toronto, tenants have what is known as a right to return, which means after renovations are complete they’re legally entitled to return to their old units at the same rent as when they left. However, the process to do so is cumbersome and tedious, and after many months or even years in a new community and home many tenants are ultimately unable to return. In many cases tenants aren’t even given the option to return and the landlord will simply rent the unit to a new tenant at a huge increase in rent. If caught, landlords can face fines for doing so, but it’s rare for fines to be applied, and rarer still for the fines to even come close to the profit a landlord will make from displacing tenants.

In 2019 tenants at 795 College St were issued N13 eviction notices, the type of eviction one receives when a landlord intends to make renovations to a unit. As Cole Webber, a tenant community legal worker at the Parkdale Legal Clinic notes, the tenants pleaded with the courts (Landlord Tenant Board) that if they were evicted the landlord would not permit them to return to their homes after renovations are completed as is legally required. Unfortunately the tenants were right, and their homes are now housing tenants at nearly quadruple the old rent.

Both bosses and landlords are capitalists and hold disproportionate and downright tyrannical power over you. But importantly, both can be organized against. Collective organizing helps to keep tenants in their homes under threat of eviction and can be used to resist rent increases or demand repairs. In Ontario, and much of Canada, tenant organizing hasn’t historically threatened capital in the same way that labour unions have. Consequently, there’s very little legislation surrounding what form a tenant association can look like. Unlike a labour union, a formal vote to form the association isn’t even necessary: tenants can simply agree they’re acting collectively and in that instance a tenant association is formed.

Landlords and bosses are two sides of the same capitalist coin, and their fight against both is also an issue of racial justice. As Richard Moore, socialist organizer and leader of the Harlem Tenants League explained nearly a century ago, “Exploited at the point of production where they are paid the lowest wages for the most taxing and menial jobs, Black workers are set upon at the point of consumption by rent hogs and landlord sharks who take advantage of their segregated situation to gouge and bleed them to death.” He called on workers to “build strong tenants leagues and powerful labor unions as their essential and effective instruments for this vital struggle.”

How we win as tenants

Time and time again, tenant organizing has won victories against the parasitic landlord class. Tenants at 2419 Keele St were faced with renoviction, a term for when landlords evict tenants under the pretense of doing renovations. Renovictions are used as a tactic by landlords to evict tenants they otherwise wouldn’t be able to evict, so they can increase rent they otherwise wouldn’t be able to increase due to rent control. But tenants immediately began organizing: this included poster campaigns, targeted review bombing of their landlords businesses, and even protests outside their landlord’s home. Their efforts resulted in the eviction notices being withdrawn.

Similarly, in 2017 tenants in Parkdale badly needed repairs and were facing illegal rent increases. Parkdale tenants organized a rent strike of 300 tenants across 12 different buildings, lasting 3 and half months. Eventually the landlord caved and tenants won reductions in planned rent increases, relief for tenants facing financial hardship and a program of maintenance and repair work.

Through my work as a tenant organizer with the Oakwood Vaughan Community Organization I’ve been helping tenants at 1A Bansley resist renoviction just like tenants at 795 College St and 2419 Keele St. Their landlord has a history of buying small buildings with affordable rents, forcing tenants out, and then raising rent significantly. But the tenants at 1A Bansley have organized and are acting collectively: they’ve delivered a letter of demands as a group to the tenants house, postered about what’s happening in their and their landlord’s neighbourhood, and held a protest. If you’d like to get involved, please reach out to us at Oakwoodvaughantenants@gmail.com or signup at this link to the phone zap we’ll be hosting on April 24th at 12pm. We’ll keep going until the evictions are withdrawn!

Decommodified housing and a socialist future

Workers nowadays are expected to hand over at least a third of our paycheck to a landlord simply because they had the money to buy a contract saying they own your home. In Toronto today, the average renter under 30 spends  49% of their income on rent. But it doesn’t have to be this way: Socialist Vienna in the 1920s built luxurious social housing complexes designed as community hubs that cost workers 3.5% of their income. Housing is a human right, housing is healthcare – and there’s no moral justification for housing to serve the whims of capitalists before the needs of people. Tenant organizing is a critically underrepresented part of a path towards a healthier future for us all.

Taking the parasitic nature out of housing means decommodifying it – making sure housing is not a commodity or investment, but something for all to access. Decommodified housing isn’t a reform; it’s a radical reenvisioning of the entire market. Decommodified housing doesn’t mean fewer renovictions; it means no evictions. It means housing for all. It means the abolition of homelessness. It means workers have more bargaining power with their bosses. How much less could bosses get away with if quitting didn’t carry the threat of homelessness? Decommodified housing is a policy choice of hope and optimism for a joyous future; one where housing serves us and not profit, where cities are built with community in mind, where workers are benefitted materially by not having to fork over half their income to a landlord.

On May Day, or International Workers Day, there will be mass rallies across Ontario hosted by the Ontario Federation of Labour, including the demand of affordable housing. These rallies provide us with a great opportunity to bring our neighbours out to build and witness the mass public support for changing how society handles housing. Showing support by mobilizing on May 1 accomplishes two ends: first, it builds our confidence as tenants that we have the power to fight back against our landlords; second, it pushes everyone to imagine a world where we don’t have to rely on landlords just to be housed. May 1 is a chance to get everyone in your building feeling confident to fight for your rights and ready to build a world where housing isn’t commodified.