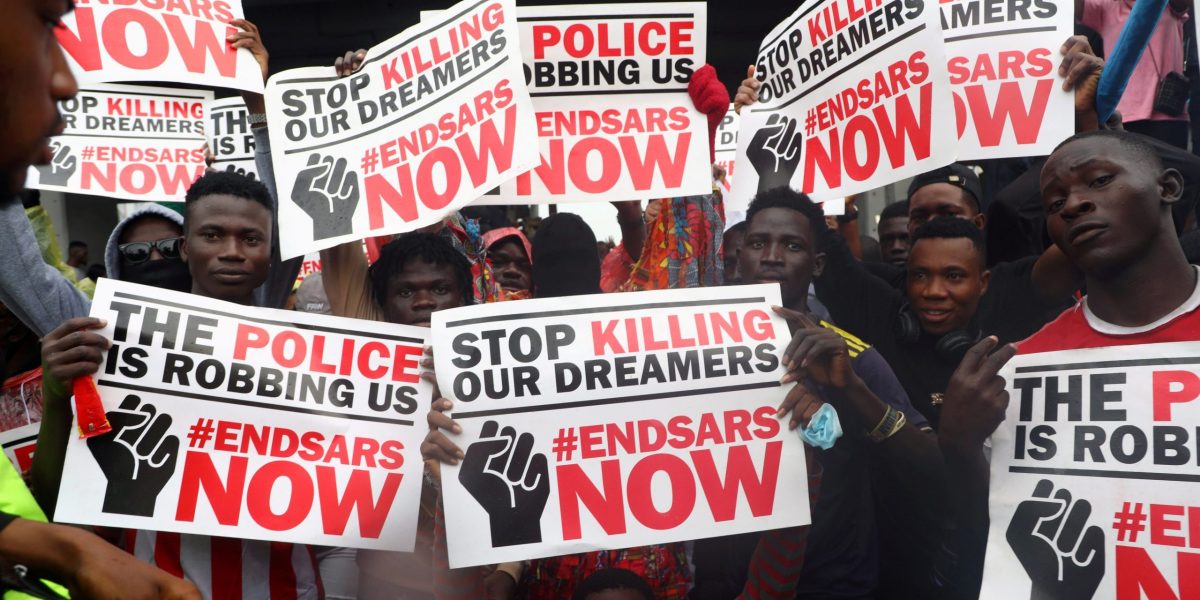 Across Nigeria, we have trooped out in our thousands demonstrating the power of mass action. We say #EndSARS because we are tired and will no longer standby watching police kill or brutalise us and our loved ones. We have made it clear with action that we will not take cosmetic changes like swapping SARS for SWAT.

Families of victims of police extra-judicial killing have not been compensated. No killer policeman has been made to face justice. Not all arrested protesters have been released. And our social and economic conditions of poverty and insecurity remains the same.

#EndSARS is our shorthand for an end to continued suffering from cradle to grave – except you are the child of one of those looting the country blind. We cannot access quality healthcare, without paying through our noses – that is if we have the money to pay. Our schools are in shambles. And after school, to get work is a problem, except you come from a rich and well “connected” family.

The National Bureau of Statistics said 14 million Nigerian youths are unemployed. Even this huge number is a gross underestimate. More and more youths, amongst the few who had jobs before the pandemic are being sacked.

Life is being made hard for us by a generation of rulers who enjoyed free education, decent public healthcare, and job security. When we get jobs nowadays it is as casual labour or “contract staff”. And on top of it all, we cannot walk peacefully in the streets without police harassment.

With the #EndSARS protest movement, we are rising to seize our destiny in our hands. We are many, but we are one. We are students, workers, traders, professionals, unemployed – and we are all youth. In our different ways, we have organised this massive movement for almost two weeks now.

The movement has no clearly-defined leaders – we all have a right to present our positions on the way forward. But we must establish structures at some point, in our neighbourhoods and the centres of our mass actions on the ground, to ensure accountability and defend the unfolding revolution.

We have no illusions that youths alone can change Nigeria. All hands must be on deck. The working class wields great power, particularly with general strikes. But their national leadership continually betray the rank and file workers, which include us as working-class youths. We call on workers’ leaders in local branch and state councils to express their solidarity with the youth protest movement and join us at the barricades.

This will not be the first time in the rich history of the poor masses struggle in Nigeria that the youths have roused the rest of society, including our mothers and fathers, who like many of us are working people. It was the youths who mobilised for the establishment of a united national council to fight for independence in August 1944.

For decades before it became corrupted and incorporated by the government, the National Association of Nigerian Students (NANS) mobilised the masses to the trenches of struggle against imperialism, austerity measures, structural adjustment programmes and military dictatorships from the 1960s to the 1990s. And when the trade unions organise major strikes, we as youths, include young workers in the trade unions were always at the forefront of the barricades.

We call on all our compatriots, youths who like us have been at the barricades to take this historic revolt as the beginning. We can win some concessions from the government to curb police brutality for a while. But we will never end police brutality without system change.

That is why police brutality and extra-judicial killings are rampant across the world, including in more developed economies. Through struggle, we can restrain this killing machine of the elites against us. That is why the reforms of the #EndSARS 5Key demands are important.

These are necessary but not sufficient. We must deepen and expand our revolt and break the chains of exploitation and oppression which has made living hell on earth for us as poor or “managing” youths, in a rich country.

The coming months will make the hell that life has been for us so far seem like child’s play if we do not fightback. The increases in fuel pump price and electricity tariff are just the samples of the package of economic attacks which the Maj. Gen. Muhammadu Buhari-led regime is committed to, as the elites and IMF/World Bank try to make us bear the burden of an economic crisis worsened by the COVID-19 pandemic.

The world is at a major crossroads. The youths and working people all over the world are rising to fight against police brutality, economic exploitation, and all forms of injustice. Our struggle is part of this global rebellion towards a worldwide revolution.

And we must continue to fight until the demands of this phase of our struggle for the better and dignified lives we all deserve are won – and we demand more.

We as Socialist Youths call for such more, including the following demands:

This was first published by the Socialist Workers & Youth League.