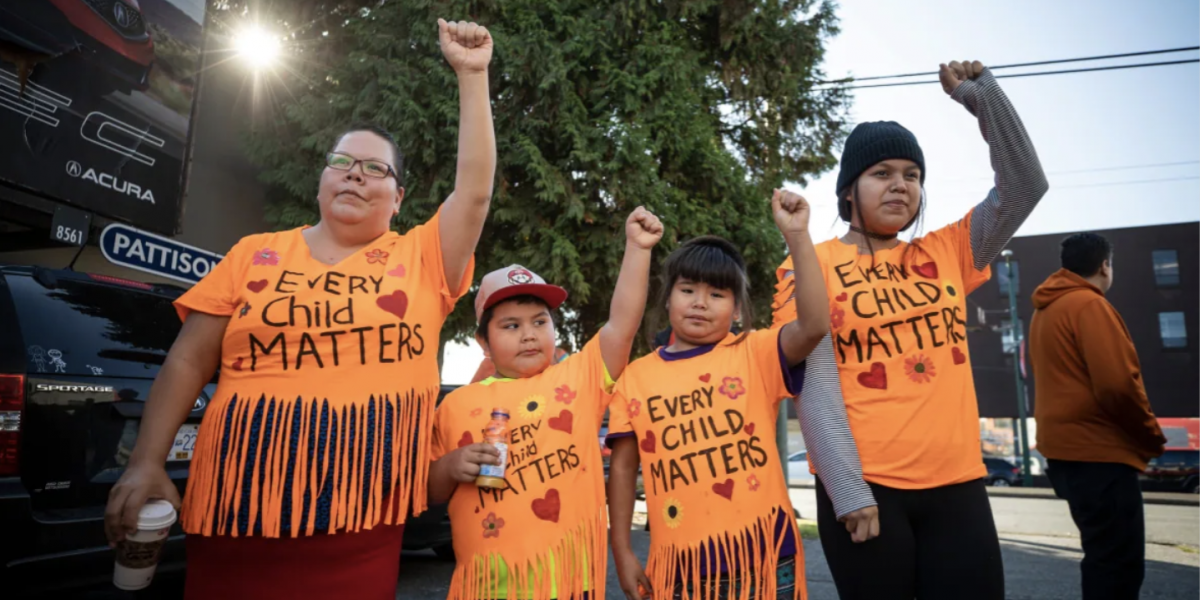 Myeengun Henry is a former Chief and respected Elder from Deshkan Ziibiing (Chippewas of the Thames) First Nation. He is Manager of Aboriginal Services at Conestoga College in Kitchener, Ontario. He spoke with Spring Magazine to share his response to the news of the hidden graves of the 215 children buried at the Kamloops Indian Residential School, and links this tragedy with ongoing issues of poverty and other problems caused by governments’ failures to live up to signed treaties. He recommends ways for allies to support the call to respect treaties and the UN Declaration on the Rights of Indigenous Peoples.

What’s your response to the latest discovery of graves?

Indigenous people are dealing with this trauma in various ways: some cry in solitude, some reach for an addiction, some mask the pain in work, some lash out at governments, schools, non-natives, some are avoiding it. But regardless of how we are dealing with it we are all carrying the pain and guilt of a horrific history and we are all re-living it over and over again like a reoccurring nightmare.

The discovery of the graves at Kamloops Residential School didn’t surprise me because we knew these existed. So, unfortunately, we need to prepare for more findings of more graves of children at other or all residential school sites. For example in Brantford the Six Nations knew of graveyards and the same is true for us with the United Church-run Mount Elgin Indian Residential School here in our community, which we referred to as “the mush hole run.”

The report of the Truth and Reconciliation Commission includes Calls to Action that spoke to this, wanting the government to look for and clean out these spots. But this was never done. This bothers me that governments knew about this and never responded. Nor did the churches. One of the ministers with the nearby Anglican Church is now in jail for molesting a number of boys and when I spoke to the diocese, they acknowledged it happened but never offered a compensation or apology. It seemed they were more scared of legal actions against them, and that if they apologized, this would open the door to legal action.

How is the government responding?

What the government is doing is too slow. What I’ve seen over the years is that the acts of any particular government don’t coincide with indigenous issues. The 10 years of Harper were a stall. Now we have a prime minister throwing money at things but the root of the problem is not being addressed. So we hope Canadians ask the government to put into the constitution a form of reconciliation every successive government will have to honour.

Look at the forgotten treaties, for example the Jay Treaty. I was campaigning in the last US election, as I was born there, and when I reached out to the US elections people they said I couldn’t vote. So I referred to the Jay Treaty that said natives could live and vote on either side of the Canada-US border, but they denied me access. So I had to get a lawyer to persuade them to give me a ballot. And they did. This is just one example.

Governments will say treaties have been nullified but that’s just their own interpretation. How can they say without consultation that the treaties don’t exist anymore? They don’t go away just because one side says they don’t want to honour them.

Other residential schools are now being looked at, then they will find more graves. Will we go into mourning again and again and again? After awhile the country becomes numb, people lose their sensitivity. And that’s what’s happening with indigenous issues in general.

What impact would honouring the treaties have?

By honouring the treaties we have, we would alleviate our poverty issues and give us the opportunity to participate in the broader Canadian economy. Our treaties and agreements spoke clearly of a partnership where the many resources of this land were to be shared. Canada honouring these agreements would exterminate poverty, including incarceration rates, over-crowded housing and child neglect.

People ask how honouring treaties could end our poverty. In the treaties we were to be partners using the resources of this land and the government at the time agreed these resources would be shared. And that would allow us to participate in the economy and allow us to have basic necessities that most Canadians have.

One of the things that bothers me is that Canada still holds title to the land base on reserve, and they give parental guidance to First Nations, which is how the Indian Act was built.  “We’re the great white father”, so they hold title to our land and make the rules.

Look at Deshkan Ziibiing and our water issues. We get the runoff from the big city of London and we’ve been fighting them to fix their water system because when it rains their sewage goes into the Thames river and affects our drinking water. This is common to many First Nations. We’ve been fighting for decades. The farmers locally were using fertilizers that also go into our water system and we suffer the health issues, due to unregulated fertilizers and sewage. If that happened in a white community there would be an uproar and a stop to it.

But we’ve been “experiments” for a long time. We had a bombing field on our reserve where planes would do practice runs during WWII and we’ve found undetonated land mines. After the war was over they “allowed” us to build on that land. But when we decided to put a commercial complex on our reserve, so non-natives could rent space, we were stopped by the justice department because of unfound land mines. My reaction was “How come you didn’t care when we were farming the land and taking the risks of undetonated land mines?” People don’t know about these things.

These treaties and Section 35 of the Constitution talk about our rights but governments don’t want to put reconciliation into the constitution, so the problem still exists. That’s why this has to be addressed. They still hold decisions on money for child welfare, on deciding who’s a member, and they dangle the dollars in front of us to create discomfort among Indigenous communities fighting for the same dollars, e.g. First Nation vs. Metis. vs. Inuit causes.

What can allies do to support?

When some non-native people feel the need to reach out to a native person to express their guilt and hurt, guess what? That ends up on the native person’s lap. We as humans need to carry this load together and find solutions! When non-natives are interested in learning about our experiences, some First Nations people will express their pain and they’ve had to do that already, telling their story. So allies need to be more sensitive to this.

Solidarity with specific land defenders like Wet’suwet’en and 1492 Landback is good. We want to put people to work in unity. There are specific campaigns for particular First Nations, but it would be more systemic to have all treaties honoured. Then all those issues would be addressed. There is no national campaign to push the government to honour the treaties. We are so inundated with our own issues, our own issues take up our whole time, so we rely on our allies. We don’t have enough people to do all these things. Therefore anyone who feels justice is denied could have a look at this.

I work with the Law Society and OPP trying to provide that input to their policies. And I’m still working with Enbridge on the same thing, as an individual; you can’t stop talking even to your enemies. (note: while Chief of Deshkan Ziibiing, Henry led opposition to Enbridge’s Line 9, which traverses many First Nations including Deshkan Ziibiing; the case went to the Supreme Court of Canada where the Nation showed the limitations of the National Energy Board’s so-called consultation process, how the Board rubber stamps pipeline projects)

Bill C15 would see UNDRIP (the UN Declaration on the Rights of Indigenous Peoples) being implemented and the Bill is now going to Parliament. Some First Nations are opposing it and some want it. I think the opposition is because of the mistrust we’ve always had in government. So anything the government does, the people don’t trust. That mistrust can stop progress and we won’t get anywhere if people oppose things that might be good. It’s a debate but our decision-making comes from our clans, not individual researchers. We have a clan system and everyone has a say. Sometimes governments and the media will lean on specific Indigenous individuals because they’re more vocal or visible, but what about talking to the grandmothers and grandfathers? That’s who governments and the media should be consulting with.