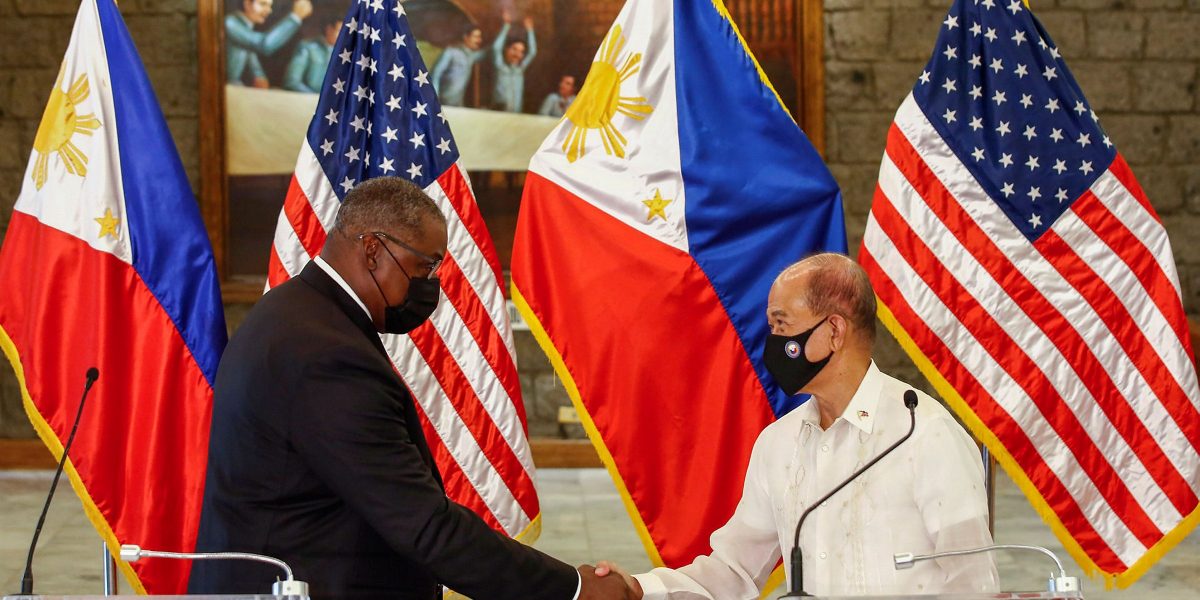 The Visiting Forces Agreement (VFA) between the U.S. and the Philippines is in “full force again.” as President Rodrigo Duterte retracted his order to terminate the military pact with the country’s former colonizer.

Duterte’s decision was announced by Defense Secretary Delfin Lorenzana on July 29 during a visit by U.S. counterpart Lloyd Austin III in Manila. “The VFA is in full force again. There is no letter of termination pending and we are back on track,” said Lorenzana. As Austin stated, “Our countries face a range of challenges, from the climate crises to the pandemic and, as we do, a strong, resilient US-Philippine alliance will remain vital to the security, stability and prosperity of the Indo-Pacific.”

But the military pact will not help stabilize the ecological crisis or promote public health. Instead, the US is pursuing imperial rivalry with China, while Duterte is bolstering his own repressive regime.

This year marks the 75th anniversary of diplomatic relations between the U.S. and the Philippines, which remains a longtime ally in the Indo-Pacific region for its former colonizer.

The first formal military pact was the 1951 Mutual Defense Treaty (MDT), a widely contested pact that obliges both the U.S. and the Philippines to respond to attacks against the other. It was inked after the Second World War to allow U.S. military presence in the Philippines, first to guard against Japanese imperial forces and then the Soviet Union. The continued U.S. presence in the region is seen as a strategic alignment to compete economically and militarily with China.

The VFA took effect in 1999 to provide legal terms for the rotation of U.S. troops, planes and ships in conducting large-scale war drills and exercises in the Philippines, while the 2014 Enhanced Defence Cooperation Agreement (EDCA) allows the extended stay of American forces. It gave authority to build and maintain barracks and warehouses and to store defense equipment and weapons inside five designated Philippine military camps. This agreement was meant to help address the growing military intrusion of China in the West Philippine Sea, also known as South China Sea.

Every year, American and Filipino soldiers engage in around 300 activities and war games, including the Balikatan, which literally means “shoulder-to-shoulder” in Tagalog. These involve thousands of troops in amphibious operations, live-fire training, urban operations, aviation operations, and “counterterrorism.” Although the 2021 joint exercises were scaled down due to the COVID-19 global health crisis, military engagement has seen an increase under the Duterte regime despite his occasional statements against the VFA.

Duterte has often cited his “independent foreign policy” stance, praising Russia and China while relations with longtime U.S. ally turn sour, and first promised to end the VFA in 2016. But his goal is not independence from imperial powers but balancing between them, while using military supplies to strengthen his own repressive regime.

Police forces have killed thousands of mostly poor people in Duterte’s “war on drugs”, facing international condemnation from the United Nations and human rights watchdogs. Washington revoked the visa of the former police chief, senator Ronald dela Rosa last year, and in response Duterte said he would terminate the VFA. Last November, Foreign Secretary Teodoro Locsin Jr. announced the postponement of the Philippine decision on the VFA, but now it is in full force again.

Repression also continues to threaten recovery from Covid-19. Basic measures such as mass testing and contact tracing have become stagnant while positive rates soar. Instead, militarized heightened restrictions, including sweeping stay-at-home orders, negatively impact the economic survival of low-income families. Peoples’ response of mutual aid such as partaking in donations or setting up community pantries are prohibited and criminalized. State propaganda pushes in peddling disinformation and creating scapegoats to distract public attention from the government’s failure.

Duterte still hopes that Manila can maintain peaceful ties with Beijing. As he gears for the last year of his term, he is particularly interested in receiving infrastructure and investment funds through China’s Belt and Road Initiative to seal his legacy. However, Filipino popular opinion holds negative attitudes toward China’s actions in the disputed territories. Thus, there is much more political benefit for Duterte in restoring the VFA with the 2022 national elections in mind.

Lackeys of imperialism in the Philippines have a major influence on the country’s politics. The U.S. hegemony in the Philippines is profound. Both factors have served to offset Duterte’s arbitrary moves in the past. Duterte’s decision to keep the VFA can be seen as a compromise to appease domestic political forces amid plans to perpetuate himself in power beyond his term limit. For its role, Washington must have coerced Manila to keep the deal as part of its core objective to shore up its economic decline by confronting Beijing.

Activists who had protested against the Balikatan and pushed for the scrapping of the VFA said they were not surprised at the Malacañang Palace’s recent announcement. “Duterte was never really serious in terminating the agreement. He did seek more US military aid, the kind that will be used against the Filipino people especially in the regime’s counterinsurgency drive,” said Renato Reyes Jr., secretary general of Bagong Alyansang Makabayan (Bayan).

He added that the VFA will not help the country in its territorial claims to the West Philippine Sea. “Modernization under the VFA and the MDT is a myth. We must reject the false claim that the US wants to modernize the Philippines.”

“There are others who prefer to be a U.S. neocolony and military outpost than to become a province of China. But why do we have to choose between two oppressors? Can we not aspire to be genuinely free? No country has ever truly developed by being subservient to imperialist powers.”