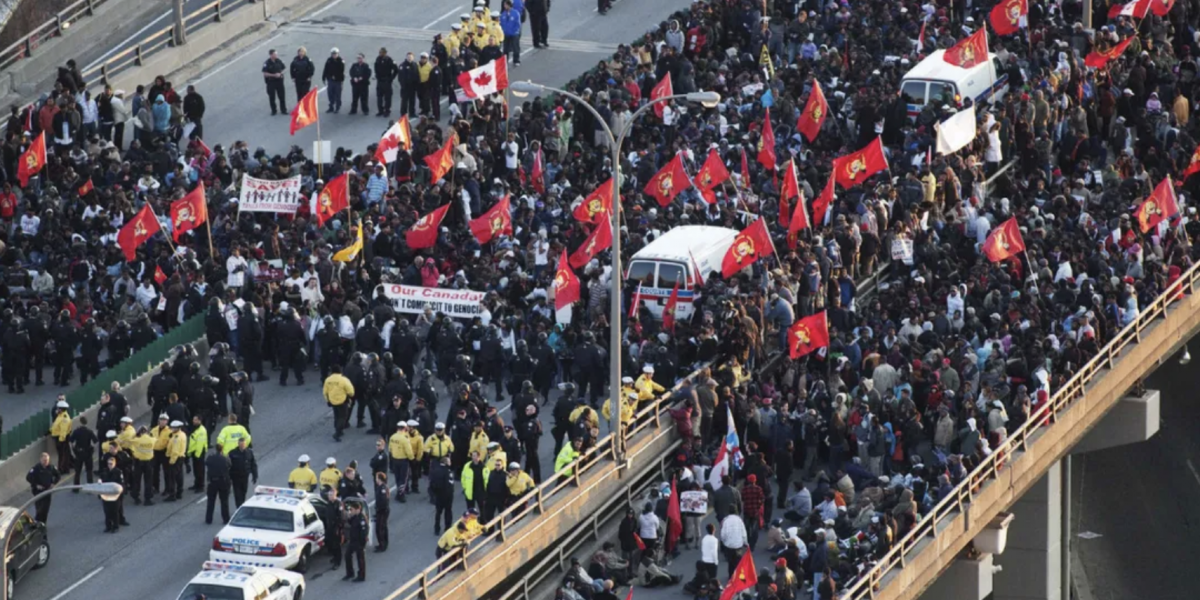 Thirteen years ago, I was among tens of thousands in Toronto’s Tamil community who protested the war in Sri Lanka. I remember waking up on Mother’s Day that year to the horrific news that an all-night artillery barrage killed nearly 1,000 people in a single night. After weeks of candlelight vigils, letter-writing campaigns and petitioning, we felt desperate to draw the world’s attention to Sri Lanka’s escalating genocide against the Tamil people.

Later that day, thousands of us occupied the Gardiner Expressway. It would become a landmark event in the history of our community.

In its campaign to eradicate “terrorism,” the Sri Lankan state spared nothing. Hospitals and places of worship, full of the sick and wounded, were routinely bombed. Food distribution lines were repeatedly shelled. Even the government’s so-called “no-fire zones,” packed with thousands of civilians, were indiscriminately attacked from the ground and sky.

For the Tamil people, the last stages of the 2009 war fit an all-too-familiar pattern: a protracted genocide involving pogroms, economic embargoes, indiscriminate bombings, discriminatory policies and the dispossession of Tamil lands that has haunted our people like a ghost since Sri Lanka’s independence in 1948.

One United Nations report estimates that from January to May 2009 between 40,000 and 75,000 people were killed. The Sri Lankan government’s own statistical data reveal that almost 147,000 persons remain unaccounted for: no one knows if they are held in prison, injured or dead.

Accounts like these explain why the term “genocide” carries so much meaning in our community. It is the only word that can describe our decades-long experience.

No wonder, then, at our community’s sense of elation and relief last year when all parties in the Ontario legislature voted in support of Bill 104, Tamil Genocide Education Week, which would take place from May 11 to 18 every year. Although coming more than a decade later, this milestone legislation finally legitimized what we were saying in 2009 – and validated our trauma, suffering and struggle for national liberation.

This long-awaited recognition of the genocide was an essential step in our community’s attempt to heal and a signal from our non-Tamil friends that our struggle mattered to them.

Sadly, not everyone would rally to support us. Earlier this year, a coalition of Sri Lankan organizations launched a constitutional challenge against Tamil Genocide Education Week, arguing that Ontario has no jurisdiction to use the term “genocide” to describe our experience.

On May 24 and 25, a hearing took place in Ontario’s Superior Court of Justice. In any challenge to provincial legislation, the Attorney General represents the government.

Failure of the government to recognize Tamil genocide

Imagine our shock and disappointment when we heard government lawyers announce that Ontario never actually recognized the genocide because the term only appeared in the legislation’s preamble – and therefore is not legally binding.

Making matters worse, government counsel attempted to dismiss any connection between the events of May 2009 and the timing of Tamil Genocide Awareness Week, stating that “a week was picked and a name was assigned” – as if it were a purely random (and meaningless) decision.

In our community, May 11 to 18 is not just another week. For the last 13 years, Tamils across the globe have commemorated the Tamil genocide in the days leading to May 18. It is an excruciating and highly symbolic date on our calendars.

Though it may have been legally prudent for the Attorney General’s Office to make this argument, it simply can’t be disassociated from its meaning for most members of our community. The same people catered to during an election campaign – whose years of activism have helped make genocide an undeniable reality in any public debate about human rights in Sri Lanka.

Despite what Progressive Conservative candidates repeatedly tell Tamil community members at their doors, the provincial government has declined to acknowledge what our community endured 13 years ago.

What matters is what the government says when it doesn’t think our community is listening. But we were listening, and what we heard was like a slap in the face.

When campaigning amongst Tamils, PC candidates have been silent about their party’s record over the last four years. COVID-19 hit our community hard, as we contend with a higher proportion of minimum wage, non-unionized workers, and people without access to paid sick days. Many quietly endured Ford’s decision to cancel the $15 minimum wage, roll back decent work laws and eliminate paid sick days, even as they got sick on the front lines of the pandemic.

They were willing to forgive him because we understood the importance of having the genocide validated. And that recognition was too important to lose. But now, on the eve of an election, we’re finding out what Ford really thinks: it’s okay to say one thing to our faces but then deny our suffering behind our backs.

The Tamil diaspora, numbering over 300,000, is one of Ontario’s most prominent and visible diasporas. For us, no matter where we sit on the political spectrum, the genocide is something that touched all of us. At the ballot box, it must never be opportunistically reduced to a cheap vote-getter.

Our struggle is not for sale.