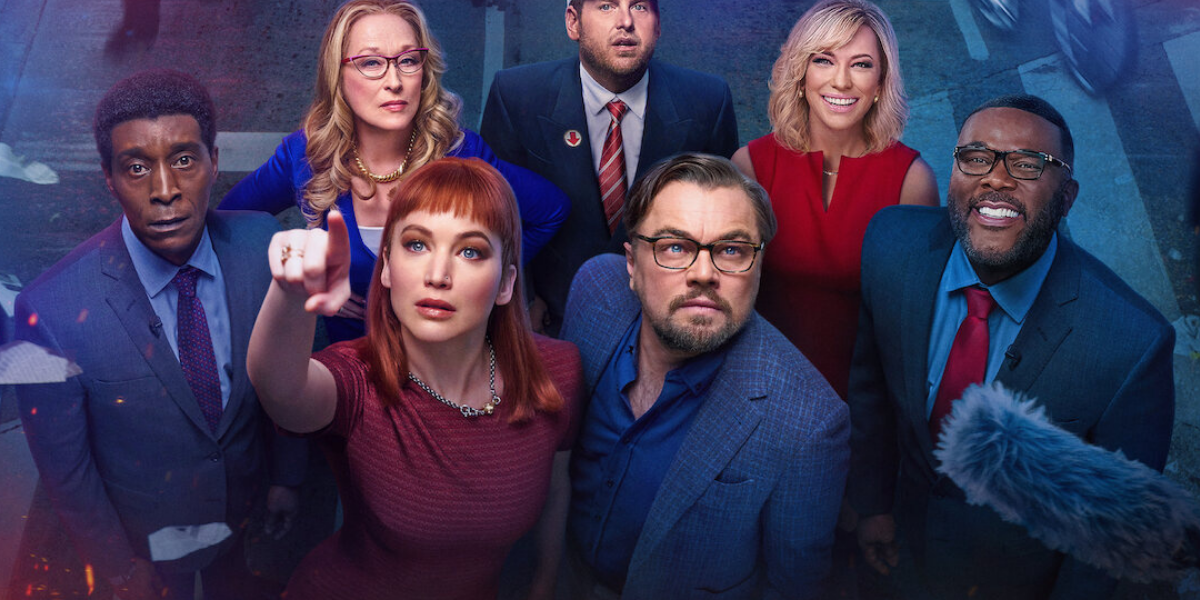 At this point, it is tough to say too much more about Adam McKay’s latest movie Don’t Look Up. For the few who haven’t heard about it or watched it, the film uses a comet heading toward Earth as a metaphor for climate change, with the scientists who discovered it desperately trying to warn the media and political leaders about the deadly consequences that impact would have. Unable to get the establishment to take the planet’s impending doom seriously, and once they do only to see solutions thwarted by profit interests of tech billionaires, Don’t Look Up offers a cris-de-coeur, a passionate plea for audiences to take climate change seriously before it’s too late.

At times satirical and gag filled, at other times poignant and terrifying, Don’t Look Up has stirred a lot of responses among everyone who has watched it. While critics balked at its style and message-telling, audiences seem to approve, being the most popular thing on Netflix and receiving mostly resounding reviews from watchers, including support for the film from climate scientists. Some on the Left have offered criticism about the solutions on offer (or lack thereof) or how the film privileges certain experiences (white male middle class ones) when presenting all that is at stake.

There is always room for criticisms of art and discussion about what a film that aims to be political does right and what it does wrong. But when an ostensibly radical and progressive film is being gobbled up by mass audiences, who feel seen in a film that explores how ordinary people are manipulated or ignored, is it the role of socialists to just join the critics mob and tear down the film because it fails at offering perfect politics?

When judging political art, the starting point should be what is the work doing in the context of larger political debates and movements? In the case of Don’t Look Up, the film offers a story that many activists and climate scientists can identify with. For those who have been warning the world about the severity of potential climate catastrophe, the film reveals to a mass audience the frustrations of being ignored for far too long. For those who have been campaigning for stronger action to curb carbon emissions only to see government policies that are too little and too late, the film skewers a useless political class too beholden to corporate interests to do what’s right. For those terrified by the terrible world climate change may leave in its wake, the film is a stark warning about what failure to act will have.

The film may be a bit blunt and on the nose, but for those building a movement to curtail climate change who recognize that this can only be done with systemic transformation, the time for nuance has sailed. Efforts to cajole and persuade political leaders has resulted in climate deals that are unenforceable and that have not curtailed carbon emissions. Don’t Look Up feels like the forceful, cutting, and unapologetic satire that needs to be told. That millions have rushed to see it, and that discussion about the film is getting such broad traction, shows that the film resonates in an important way, one that can move more and more people from fear about climate change to action to stop it.

Don’t Look Up is not a perfect film and having more in-depth discussions and debates about what it does well and what parts of the story are left out are important. That said, the film at its best is advancing debates about the urgency of climate action and socialists should be running with that to build resistance and alternatives to a capitalist system not up to the existential challenge facing us.