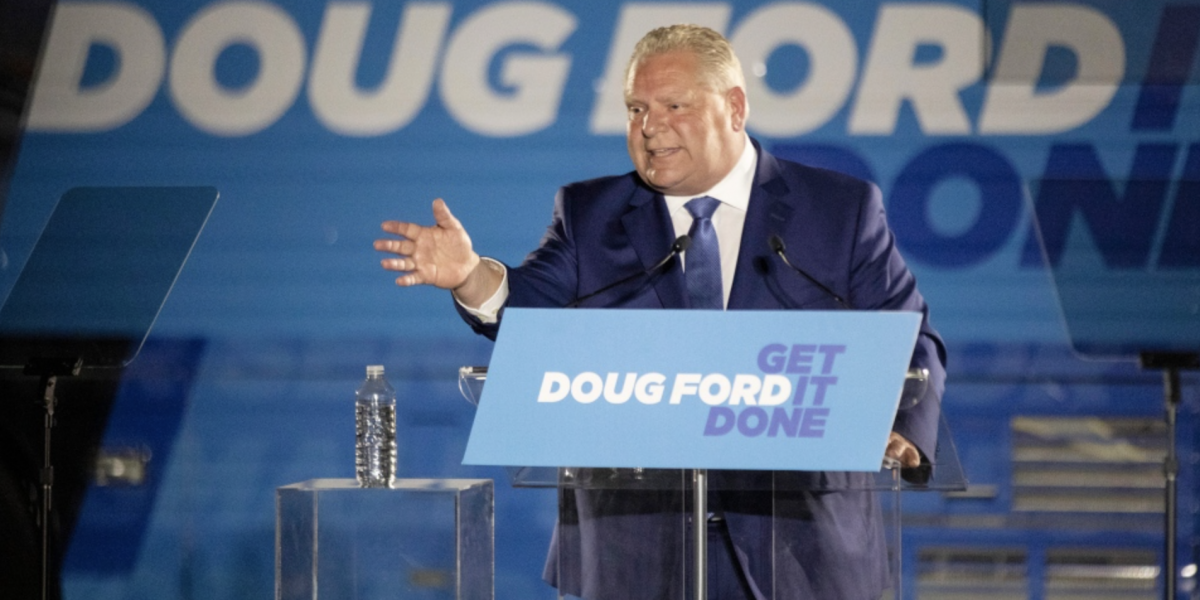 Do you remember the Berenstain Bears series? When I was in kindergarten, the teacher was reading one of the beloved fables, The Berenstain Bears and the Truth – the one about the kids breaking the lamp after tossing a soccer ball around inside. They were specifically told not to while Mama Bear was out, and instead of coming clean, they made up an elaborate tale about a technicoloured bird that squawked, whistled, flew into the window and knocked over the lamp. The giveaway was that the cubs kept changing the colour of the bird. Mama Bear wasn’t sad about the lamp though; she was sad that her kids were lying and said, ‘trust is not something you can put back together again when it’s broken.’

At that moment, my hand shot up in the air and I said, “Mike Harris is a liar!”, and my eight-year-old classmate said “Yeah! He steals from the poor and gives to the rich.”

The legacy of Harris

We were both children of labour activists, growing up on the picket lines in the Days of Action against the Harris government. As kids under ten, we witnessed our classrooms grow increasingly larger, and budgets shrink smaller for education workers. My mum was a teacher, and any activities she wanted to introduce to her class were self-funded because Harris had left both our education and healthcare system in shambles.

He privatized maintenance of 400-series highways, leased the 407 to an international consortium that could profit for 99 years and raise the tolls at their discretion, laid off provincial food inspectors that led to a meat-packing company selling meat unfit for human consumption, and closed public lab services in favour of private ones, which led to Walkerton’s E. coli tragedy. More than 2,000 people were made ill and at least seven people died – one of whom I knew.

Privatization kills, and this is our future if we elect another Ford government.

We have seen Ford’s decisions harm people. When he voted down paid sick days countless times, leading to mass outbreaks in warehouses like Amazon where working conditions are precarious and dangerous even without a global pandemic. When Ford let small businesses know they were going into lockdown hours before it began despite ignoring warnings from the science table for weeks. When Doug Ford cancelled the minimum wage increase as soon as he was elected, and only raised it by 50 cents at a time when the cost of living is unbearable. Not to mention the $10 billion dollars that the construction of Highway 413 will cost taxpayers, to save 30 seconds on a commute that tears through the greenbelt.

Doug Ford is Mike Harris 2.0. And, as someone who was just diagnosed with early-stage cancer a month ago, the stealth introduction of American-style healthcare by Ford’s Conservatives makes my blood boil. Ford’s friendliness with corporations vying to privatize health care will mean paying more out of pocket. As the cost of groceries and gas rises, it might also mean people opt out of paying for services, only to find out in years to come that they have late-stage cancer.

It’s sick. And from an economics perspective for costs to healthcare later, it’s stupid.

The Ontario New Democratic Party has 40 seats, with the Liberals at seven and a chance that their leader, Del Duca, may not even win his own seat. Horwath’s caucus only need 10 more seats to form a minority government if they hold their ridings; a reality that shocks people into action at the doors. Because let’s not pretend that the Liberal government didn’t sell off one of our biggest public assets: Hydro.

Don’t be fooled by Ford

Voters in and around my generation – Millennials and Gen Y and Xers – who could determine this election, experienced something called the Mandela effect; a collective experience when a majority believe an event occurred when it in fact did not. Many of us have a distinct memory that the series is spelled “Berenstein” when in fact, it’s spelled “Berenstain”.

Right now, Ford is trying to obscure collective consciousness in a similar sense – to re-frame himself as a ‘man of the people’. But do not be fooled. From scandal to scandal, Ford has broken peoples’ trust, and he can never put Ontario back together again. He will only make it far worse for years to come.