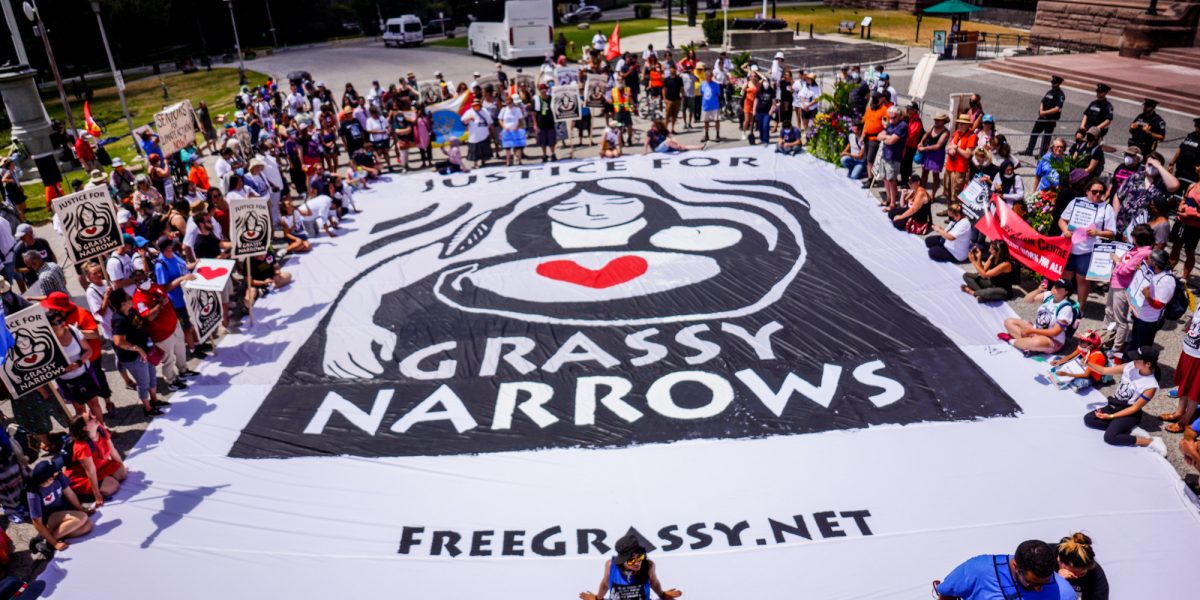 Indigenous youth and leaders from Grassy Narrows First Nation (in northwestern Ontario) travelled 1,700 km to speak at a rally outside the legislature at Queen’s Park in Toronto on July 21. The 50 activists were joined by hundreds of supporters.

This rally was held to mark the ongoing poisoning that happened on their territory when nine tons of mercury waste was dumped into their river unbeknownst to them decades ago. This was with the permission of the Canadian government at the time. Successive governments, including the current one, have not acknowledged or apologized for the serious damage and injury to Grassy Narrows people. Many people became sick and died, and many continue to suffer from the effects of mercury poisoning.

This rally was to educate us about what happened and let us know how it seriously affects them and their children forced into ill health. Marching in solidarity with the Indigenous Youth of Grassy Narrows was MPP Sol Mamakwa, member of Kingfisher Lake First Nation, and also a member of Ontario NDP was holding a banner declaring there must be justice for Grassy Narrows. He praised the crowd for showing the government what true solidarity looks like.

He was glad to see so many allies supporting the rights of Indigenous people. Allies and supporters marched downtown with the Grassy Narrows Youth and Elders to show our solidarity with those who have and are still suffering through this injustice of an unacknowledged health crisis.

To this day, 86% of Grassy Narrows members get no compensation for the serious impacts of the ongoing mercury crisis on their health, culture, and livelihoods. Last year the First Nation pushed the federal government to agree to fund a care home to treat those who have been poisoned. But as Chief Randy Fobister said at the time, “our work is not done. There is still much more that needs to be done to restore the damage that mercury has done to our community.” The Ontario government is still proposing mining exploration and industrial logging on Grassy Narrows lands, against the will of the community.

The people of Grassy Narrows are powerful leaders in the movement for Indigenous sovereignty and environmental justice. They have shown us that we can fight for justice against all odds and make real gains.

This destruction of water resources of Indigenous communities is a deadly trend and the government needs to be held accountable. Clean water is precious, sacred and necessary for all life. Access to clean water should be a human right.

That is why the Grassy Narrows community has the following demands:

To see how you can show solidarity with the Grassy Narrows First Nation, go to Freegrassy.net