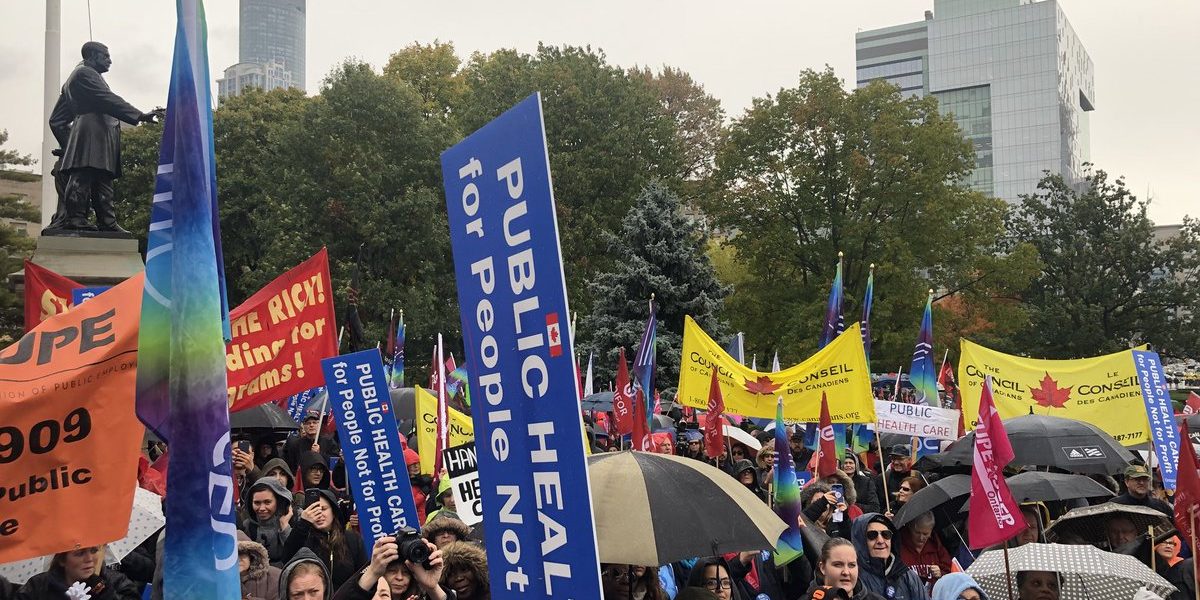 Just a few weeks after thousands of teachers, students and others rallied against Ford’s cuts to education, the Ontario Health Coalition is hosting another mass rally at Queen’s Park on April 30—this time against Ford’s attacks on healthcare. Ford was elected on a mandate to support the people, listen to health providers and end hallway medicine. But he is doing the opposite: supporting corporations, listening to CEOs, and aggravating health care. While the focus of the rally will be Bill 74 that sets the stage for privatization, the Conservatives have also undermined health with Bill 47 (the bill that cancelled paid sick days, $15 minimum wage, equal pay, and more)—and the campaign to defend healthcare can be strengthened by integrating a decent work perspective.

In January the Premier’s Council on Improving Healthcare and Ending Hallway Medicine released its first report, Hallway Health Care: a System Under Strain. The report begins by stating that “the system is facing capacity pressures” without any reference to decades of cuts that have left Ontario with the lowest number of hospital beds per capita of any province—and one of the lowest of any industrialized country. Instead it blames people, specifically the elderly and immigrants: “In addition to the anticipated growth among the aging population, Ontario’s general population is also growing larger… In particular, projections suggest that the Greater Toronto Area (GTA) will be the fastest growing region of the province… If no action is taken, these demographic changes will significantly impact the availability of health care in the province.”

This echoes Ford’s claim that there are too few shelter spaces because of too many immigrants, rather than lack of funding. While an obvious solution would be to restore public funding and re-open all the closed hospitals and beds, the report categorically rejects this—stating twice that “simply adding more beds to the system will not solve the problem of hallway health care.” What does it propose instead as the panacea? “Focused effort to consider technology solutions…this could look like new partnerships to deliver specific services.” In other words, privatization.

This is not surprising considering the Council is headed by Reuben Devlin, who was president of the Ontario Conservative Party during the Harris healthcare cuts, and CEO of Humber River when three community hospitals were “integrated” (closed) into a privatized hospital. Now Devlin and Ford want to replicate this privatization scheme across the province. The Orwellian-named “People’s Healthcare Act” (Bill 74) proposes a mass merger of health agencies into one giant bureaucracy, giving the Health Minister major new powers to “integrate” healthcare—including to “partner with another person or entity” (ie privatization) and “to cease to operate or to dissolve or wind up the operations” (ie cuts).

Bill 74 is clearly an attack on public health. And it’s the flip side of another Conservative bill that was rushed through with little public consultation, which also undermines health: Bill 47.

What is striking about the Council’s report is not only what it says but what is leaves out. In a 35-page report, the section on the social determinants of health (like wages, working conditions and a clean environment that form the foundation of health) is a mere three sentences. The report claims that “the Council will consider strategies that include prevention, early intervention, and evidence-based programs that improve health outcomes.” But it is silent on Bill 47, which reversed clear evidence-based preventive strategies proven to improve health outcomes and reduce hallway medicine.

But Bill 47 didn’t end the movement for decent work. On the contrary, the movement has continued to grow despite regressive legislation. On the eve of Bill 47 passing, polls found 70% of people across Ontario support paid sick days, and two-thirds support a $15/hr minimum wage—including 40% of Conservative voters. A movement that continues to mobilize people in support of healthy wages and working conditions can build the foundations for health, and strengthen the movement for public healthcare. This means supporting all workers to access a higher minimum wage, paid sick days and fair scheduling. It also means supporting the full spectrum of health workers, including health workers who are all too often in precarious employment themselves. While they provide healthcare for others, they are denied their own healthy working conditions.

Part of the neoliberal drive to cut hospital beds and close hospitals is to push patients from a more union-dense, public hospital environment with higher wages, into privatized community and home care services where personal support workers and care workers are paid poverty wages. The racist claim that migrants are taking health services hides the fact that they are actually providing many of these health services—whose “efficiencies” are based on denying them healthy wages and threatening them with deportation.

These workers, disproportionately women of colour, have challenged their exploitative working conditions—from personal support workers (PSWs) who went on strike and won a higher minimum wage in 2014, to care workers who are demanding landed status now. By continuing to build a movement for decent work, uniting unionized and non-unionized workers, we can support the broader social determinants of health and strengthen the full range of health services—from hospitals to home care.