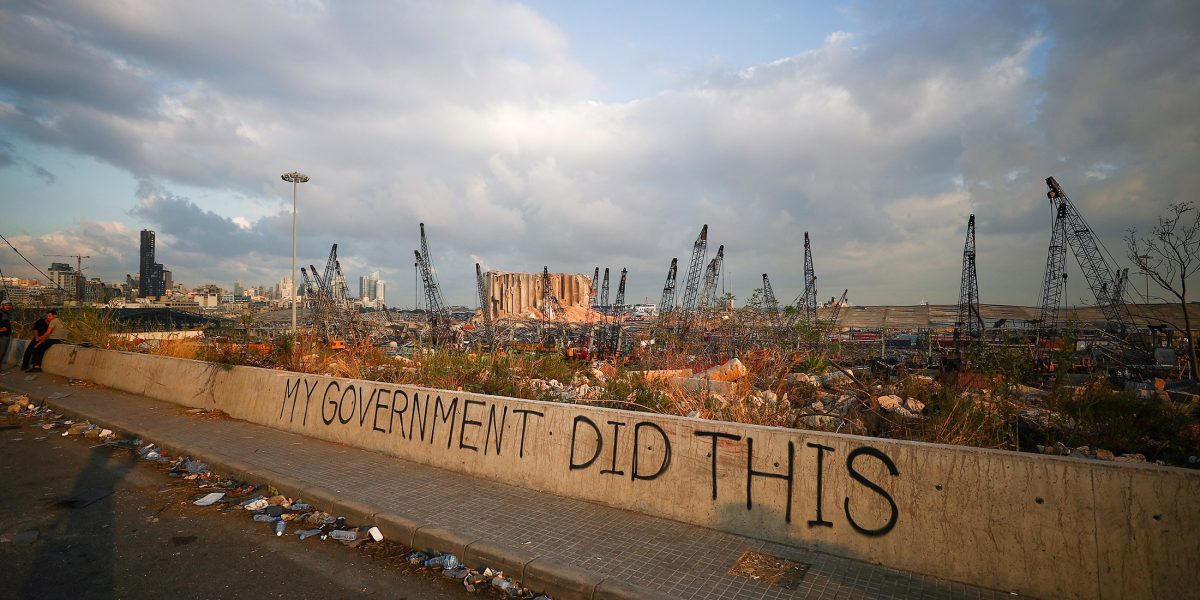 Lebanon is a highly stratified capitalist society with limited protections for working class people. Fuelled by self and special interests, the elite has long abandoned the needs of the working class. The blast that took place on August 4, 2020 was merely a symptom of this.

From an exchange rate of 1500 lira to $1 USD, leading up to the blast many paid 10 000 lira for a dollar on the ‘black’ market: a devaluation of 85%. Inflation rose to 56.5% in May, resulting in even more hungry as the cost of food items increased. Families who once ‘got by’ are now struggling to feed themselves. The pandemic exacerbated the already difficult times. To add to this, after the blast many in Beirut have lost the roofs of their shelter, the windows, doors and walls of their homes. There are longer periods of no electricity, many cannot afford rent, and salaries are decreasing incrementally or are completely unpaid. Through all these hardships, migrants and refugees take the brunt of these woes and are disproportionately impacted as they stand in the background seen as ghosts.

Ours is a complicated love story where I wasn’t truly loved. Lebanon broke my heart on the streets every other day. I saw how in two years the circumstances of a country could so easily change.

I would sit on my balcony feeling safe and conflicted. To my right was an abandoned building that a group of Bangladeshi men called home. They fried fish some Sundays and I could smell the chili and cumin rub as if I was back in Toronto in my mother’s kitchen. Below them lived Egyptian and Syrian men. One man in the early mornings would lean against the bullet-stippled wall reading his Quran before he headed to work. He’d leave his flat wearing a jumpsuit slapped with a name of a cleaning corporation that started paying workers in Lebanese lira from dollars, making his earnings lose most of its value. There were many days I watched him sitting alone for hours, the holy book to his side. I didn’t have to wonder too much about what he was feeling, I could sense it from the slouch of his heavy shoulders. When he left the building though, he walked with his head held high.

To the left of me an Ethiopian woman on the seventh floor sat out in her maid’s uniform talking to herself – she used her body more than her voice. Every so often she would look down at the street towards the wares of chip packets and bread, men balancing four, five, six, one-gallon water bottles on their mopeds, African and Asian women carrying two bottles to their supposed ‘family.’ Seeing that her madam wasn’t in the room behind her, the Ethiopian woman would call out to the sister a balcony below, who’d often look out longingly if not playing with her phone. I couldn’t tell if they were of the 50% who had their own rooms or the 11% that slept on the balcony. I wasn’t sure if they were given Sundays off; the one day a week only 36% of migrant women were given as if it were a gift granted. This was a working class area. If the average pay for maids was $180 USD and the minimum wage for Lebanese was $450 USD, how much were they paid? Were they of the 8% whose salaries were withheld, a skewed statistic as the most vulnerable have no access to the outside world.

In a hegemonic system, the dominant class maintains its power and oppresses counter-hegemonic trends in two ways: through co-option or coercion. The ‘kafala‘ or ‘sponsorship’ system used in parts of the Middle East is an example of both of these. In Lebanon the Lebanese ‘sponsor’ is afforded the financial means to buy the labour of impoverished and vulnerable Migrant Domestic Workers (MDW). The state designates the sponsor and employer as responsible for the MDW, giving them expansive rights and privileges over their worker(s). The kafala offers limited protection to the MDW, who is then contracted into a form of indentured servitude.

The result is endemic violence, exploitation, and the creation of a new ‘subaltern’ class. This creates a division between working class groups. It provides Lebanese people, many of whom have been historically marginalised or traumatised through conflict, a means to have power over individuals or groups of people. In the words of Paulo Freire, “the oppressed, instead of striving for liberation, tend themselves to become oppressors.” Even though it is forbidden for sponsors to withhold employees’ passports, it is a common practice that asserts the nature of ownership in the kafala. Many employers do so because any crime committed by their employee becomes their responsibility. The misuse of power is evident through anti-Blackness and racism towards workers.  With a stronghold and much entitlement, the hegemony is maintained whilst employers have their house cleaned, children fed, and meals cooked all for $0 – 400 a month.

As the kafala, a form of modern-day slavery, enables Lebanese of any class to own a person for their needs, it also maintains a form of nationalism. A colleague I spoke to from Beirut said, “we like trends. We want to be different. You have a maid, you have a dog, you go to this and that restaurant, wear this brand, style a certain way, look good. Its part of being Lebanese.” It is these ideas that add to Lebanon’s pot of nationalism and patriotism in support of capitalist ventures, which maintain the hegemonic interests of the ruling-class and elite—a set of dynamics that exist around the world.

In Lebanon, despite sectarian divides, Lebanese nationalism is palpable. It extends beyond the divides of religion and class, and could easily be witnessed during the uprising that began on October 17, 2019. People gathered from all sects and walks of life in protest against their leaders. From media representation, this appeared inspiring, and it was in that people were demanding change. However the most marginalised in Lebanon were excluded from these spaces. Migrants and refugees were verbally assaulted and not welcome despite their support for the movement. There were chants that were negatively charged against refugees, demanding their removal.

The Lebanese elite have used Syrian and Palestinian refugees as scapegoats to their problems. They have been blamed for the failed economy, lack of jobs, and the spread of COVID-19. This of course creates fear and hatred; xenophobia that refuses to hold the real culprits to account, maintaining the dominant class’ hegemony. We saw these tactics exemplified during the push for Brexit, and the United States’ presidential campaign. As one scholar summarized, “Marxism vertically divided the world into exploiters and exploited; nationalism horizontally cut it into many distinct nationalities.”

It is important to consider these changes and challenges through an intersectional lens. With the economic situation affecting many households, MDW have been dumped at their consulates since their employers can no longer afford to pay them. Many MDW have been evicted from their flats, and because of their legal status they have no contracts to protect them. The Anti-Racism Movement (ARM) in Lebanon reported in July that since April they’ve received 446 calls from migrants who’ve been threatened with eviction.

MDW are cleaning the mess left by the blast on the streets and in their employer’s home. They are keeping their employer’s children safe as their own children are miles away, most likely not receiving any of their due remittance. Despite the ill-treatment of migrants and refugees, Lebanon is also their home. ARM reported that though organisations are receiving donations for humanitarian aid since the explosion, many have intentionally excluded providing for ‘non-Lebanese’ people. The migrants and refugees lost in the crisis is still under-documented. Their lives and their bodies are pushed to the side once again; a part of the landscape, invisible but very present in the background.

There are activist and grass-roots organisations like ARM, led by Lebanese and migrant workers who have worked tirelessly for the rights of migrants and refugees in Lebanon.  There are progressive groups of Lebanese people who want real radical change, and are counter-hegemonic. They have been able to repatriate workers, pay for rent, food and supplies. TV channels in Nigeria reported that 72 Nigerian workers were repatriated thanks to the Lebanese community living in Nigeria. Charity, which provides short-term aid to assist people through crisis caused by the elite, perpetuates inequality and stymies systematic change. However these are efforts that must be made for the sake of those whose lives are at stake and cannot afford to wait for such change.

I met a person from Beirut who said, “why do you have to focus on the negative? People like to talk about all the bad things in Lebanon. There’s so much to love about Beirut.” Beirut indulges in its ‘Paris of the Middle East’ title, despite its own unique history and flair. By focusing on the facade and that which maintains inequality, we do Lebanon and any place for that matter a disservice. As one writer put it, “When there is not open conflict, it is as if the nation exists in a wholesale state of denial, flattering itself on its cosmopolitanism and multiculturalism.” In failing to acknowledge the kafala system, racism, xenophobia, and class and power imbalances, there will be no change despite the chants for thawra. What is a revolution if the needs of the most marginalised are not acknowledged? What is a revolution if it doesn’t come from the bottom?

From Lebanon to Canada

I am miles from my old balcony, miles from Beirut. I teach Noura, a thirteen year-old Syrian girl and her brother Fayez online. They are refugees I met in Lebanon. Their father, Abdullah was the natour of our building. Natours are men who work as doormen, cleaners, maintenance, and grocery deliverers. They do whatever it is the tenants want from them. They are usually given a small salary and a small room on the main floor of a building. Abdullah works for US$100 a month. In our last English lesson, Noura described the blast as ‘scary’. She used her eyes and hands to express this. She said her school is maksur. In that lesson, she learned the word ‘broken’. “My school is broken,” she said. She added that parts of it fell on the cars in the parking lot. “Qata’at” – Noura learned the word ‘pieces’. Her brother had been playing outside on the street. He stood close to the glass window at the dry cleaners. “He ran fast. He runs bsura’a bsura’a,” she said. “Pieces fell. Pieces of the glass everywhere.”  Noura’s mother, Salima, said the children were terrified and couldn’t sleep for days. She herself was reminded of everything they ran from in Syria. “The flats have no windows now. There is rubble everywhere. It is hard to breathe outside. The Lebanese people and foreigners in our building went to the airport, they left with so many bags,” she said. “They can afford to go somewhere, but we are here. We are still here. Lebanon is our home for now.”

As the hegemony in Lebanon through the kafala system co-opts and coerces people of all classes to be masters, and the refugee crisis is used to promote nationalism through scapegoating, we can see the similarities in Canada and elsewhere as well. The Canadian elite and ruling class have bamboozled the masses into believing they are peacekeepers in favour of environmental protection and world peace as their puppets dance bhangra and wish us all Eid Mubarak with soft dewy eyes after making a C$3 billion arms deal with Saudi Arabia. As socialists, we have a lot of work ahead of us, learning where we can and working together for the radical change we so desperately need.

To donate to an organization to support migrants and refugees in Lebanon, please consider:

All names have been changed for confidentiality.