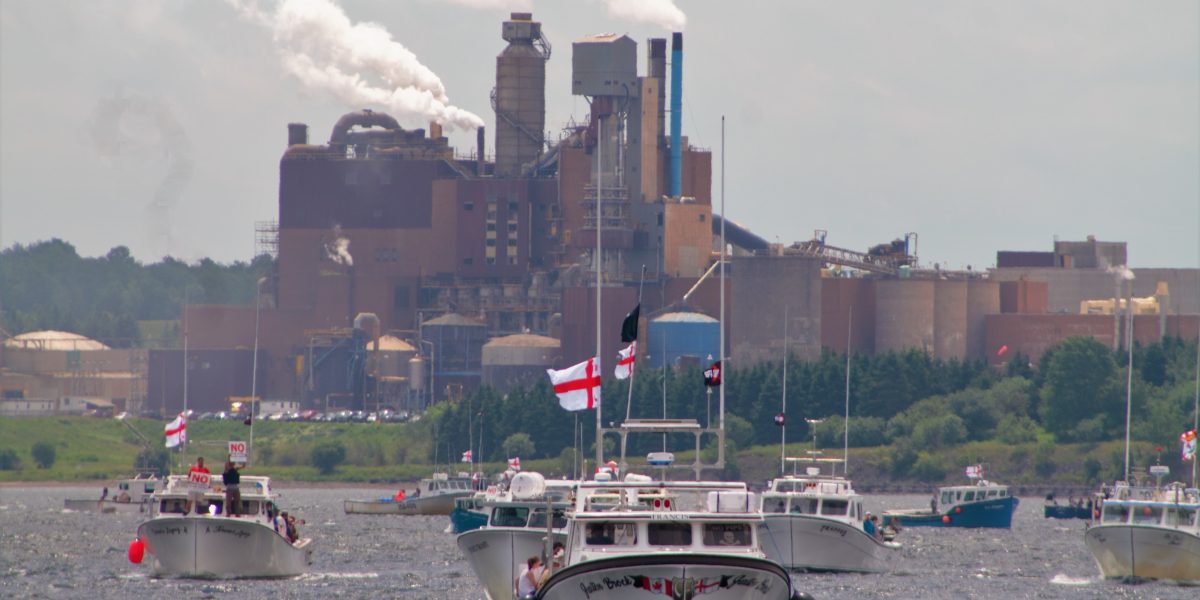 Being an East Coaster, my timeline has been flooded with the recent news of the Northern Pulp Mill closure. It has been all over the news, and has spurred several protests, on both sides of the debate. Although I myself am not a member of the forest industry, nor am I a member of Pictou Landing First Nation, I was born and raised in Nova Scotia and know that the Northern Pulp Mill impacts the environment, the people, and the economy. But first let’s back up a bit to better understand this seemingly convoluted and decades old story.

The beginning of Northern Pulp

In the 1960s a kraft pulp mill was built in Pictou County Nova Scotia. It was located on Abercrombie Point, and was constructed by Scott Paper Company. At the time the Nova Scotia provincial government signed on to agree to taking responsibility of the mills effluent for a 30 year time period. This effluent was dumped into what is known as Boat Harbour. Boat Harbour itself is a body of water also located in Pictou County NS, it was originally a tidal bay until effluent from the pulp mill began to be pumped into its waters, thus impacting the nearby residents of Pictou Landing First Nation, Mi’kmaq, who relied on Boat Harbour.

Pictou Landing elder Louise Sapier told the CBC what Boat Harbour was like before it became a dumping ground for effluent in the 1960s. “That was our playground,’ she said. Sapier said there was ‘a lot of good memories back then,’ and remembers swimming and catching ‘fish with our bare hands.’”

What was once a beautiful part of people’s lives quickly turned into a nightmare for many, as the effluent pouring from the pulp mill was polluting the Boat Harbor waters with dioxins, furans, chloride, mercury and other toxic heavy metals. Upon immediate operation of the mill, and the subsequent effluent dumping, all aquatic life died, and 30 acres of reserve land was flooded. Although some may point to the fact that the original mill was not owned and operated by Northern Pulp, it should be noted that according to the Northern Pulp website, it was only in 1967 that the mill switched hands, not long after its initial construction and opening. Meaning Northern Pulp has played a part in this case of environmental racism, and ultimately, neo-colonialism, or continued colonialism, for over five decades.

Only a ‘small Band of Indians’

It needs to be acknowledged that this outright disregard of life, land, Treaty, and livelihoods would never have been allowed to happen if this was happening in a white man’s backyard. It was deemed as acceptable as “only a ‘small Band of Indians’ would be affected by it”. This is a clear-cut case of environmental racism and settler colonialism.

As was already highlighted, the impacts of this example of environmental racism were felt almost immediately, with aquatic life dying and the stench of the mill filling the noses of the nearby residents. Unfortunately, this was only the beginning. According to Chief Andrea Paul’s victim impact statement, the mill had adverse social, cultural, psychological, and physical health effects on the Mi’kmaq community of the area, as Paul states this was not a victimless act. On top of these growing damages, a disputed pipeline was unlawfully built on Mi’kmaw burial grounds.

Indeed, Mr. Wigglesworth, a representation from the Nova Scotia Water Authority, outright lied to both a councillor and the Chief of Pictou Landing First Nation thus leading to the signing of an “agreement in principal” on October 10 1965. They did so under false-pretenses due to Mr. Wigglesworth lies, further highlighting the decades of deception that have existed surrounding this issue.

A growing web of lies

More lies along with false promises continued in 1991, when the province committed to closing the facility within five years, which never came to fruition. Despite this occurring nearly three decades ago, many supporters of Northern Pulp ruminate that there simply was not enough time.

Problems continued in 2005 but this time for the mill owners. In an effort to build a new pipeline there were fears of difficulty gaining environmental approval. Indeed, as early as 15 years ago they began to see trouble on the horizon, but yet again, they simply “didn’t have enough time”.

Promises to stop using Boat Harbour were made in 1993, 1995, 2002 and 2006. In 2008, after decades of lies, it was declared that enough was enough, the mill needed to stop, as they had been given years to stop, yet they still trucked on. Pictou Landing First Nation called for no more extensions, as had been promised in the past. Despite this call to action difficulties continued, as in 2009 there was a pipeline leak, yet no charges were laid against Northern Pulp, they were, yet again, not held accountable for their actions. In 2014, another pipeline leak, despite the leak of effluent onto the lands and into the waters Northern Pulp failed to contact the community of Pictou Landing First Nation.

Pipelines built over burial grounds, effluent leaks, and death of aquatic life seemed to be piling up on top of one another. Yet the long-lasting impacts of one of Canada’s worst cases of environmental racism doesn’t stop there. In 2016 a research study was published titled “Our Ancestors Are in Our Land, Water, and Air”: A Two-Eyed Seeing Approach to Researching Environmental Health…” This study was conducted by a research team of 36 and was led by Pictou Landing Native Women’s Group. It found that when Pictou Landing First Nation adults were compared to those of other First Nations in Canada PFLN were reported to have higher rates of poor health.

It was also found that, “Boat Harbour water is toxic to both fish and amphibians in the lab. None of the experimental groups survived 168 hr (7 days) in undiluted Boat Harbour water.” Furthermore, “the toxicity tests therefore slightly underestimate the real conditions in Boat Harbour at the water collection period.” This doesn’t sound like a healthy body of water to me, nor does it to the residents of Pictou Landing First Nation. The odour of the mill also has an impact. It was found that these odours are not just an inconvenience but can lead to serious health effects as was found in a 2005 study “The Science of Odor as a Potential Health Issue” by Dr. Susan S. Schiffman. It was also discovered that children swimming in Boat Harbour were coming out with rashes on their skin.

The environmental impacts combined with the physical, mental, and cultural impacts on the community will undoubtedly last for generations, long after Northern Pulp has reaped the benefits of this capitalist venture. Despite these substantial findings countless supporters of Northern Pulp like to cite a commentary piece by Dr. Jim Williams from STFX University that claims effluent is not toxic.

Although the Government of Nova Scotia had its hand in these atrocious acts and lies, I am happy to see them finally live up to a decades old promise. Workers who will be losing their jobs are understandably upset and may even side with the company. But the loss of jobs and the environmental damage lie squarely with the corporation and the government which abetted them.

It is sickening to see Northern Pulp escape blame for both the environmental degradation and the loss of jobs. The company had years to stop this mess, to stop the abuses towards Pictou Landing First Nation, and to spare their workers this hard loss, but the reality is, they do not care.