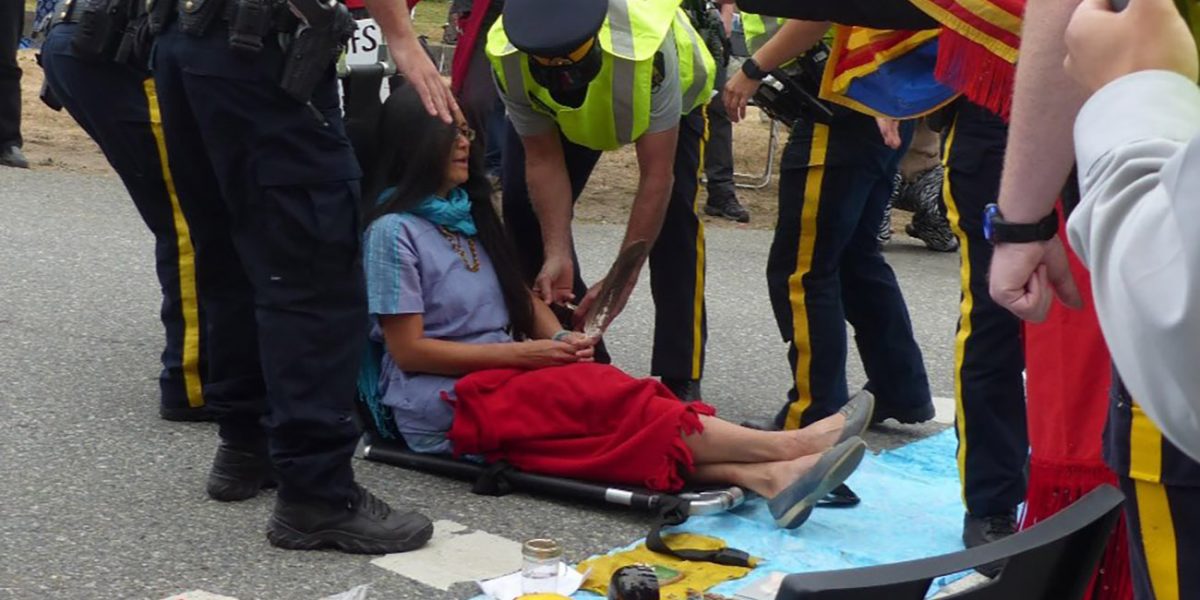 On August 16, climate activists Rita Wong and Will Offley were sentenced to jail for blocking the TransMountain site on Burnaby Mountain. Will was sentenced to 14 days in prison, and Rita to a shocking 28 days, the longest sentence yet in the more than 220 arrests of water and land protectors.

These protestors acted to bring attention to the disastrous environmental consequences of the expansion of the TransMountain tar sands pipeline, writing passionate public statements explaining why they felt compelled to defy the injunction. But the media decided that the sentencing was a non-event. Only the Philippine Canadian News, to their credit, ran a story about the award-winning Chinese-Canadian poet Wong’s sentencing, and published her sentencing statement in full.

In her statement to the court, Wong explained that we are “on the global equivalent of the Titanic, and this industrialized ship needs to change direction.” Of her defiance of the injunction, she said, “I did this because we’re in a climate emergency, and since the Federal government has abdicated its responsibility to protect us despite full knowledge of the emergency, it became necessary to act. We are in imminent peril if we consider the rate of change we are currently experiencing from a geological perspective– we are losing species at an alarming rate and facing mass extinction due to the climate crisis that humans have caused. This is the irreparable harm I sought to prevent, which the court, the Crown, and corporations also have a responsibility to prevent.”

Will Offley, longtime labour activist in the BC Nurses Union, also highlighted the severity of the climate emergency in his court statement, explaining: “Two months ago the Australian thinktank Breakthrough Centre For Climate Restoration published a series of papers on the climate emergency. They stated – and I quote ‘the world now faces existential climate change risks which may result in outright chaos and an end to human civilization as we know it.’ It talks of 100 million city dwellers who may be dislocated by sea level rise by the end of the century. It talks of the likelihood of hundreds of millions – perhaps billions – of climate refugees driven from their homes by drought, famine and lethal heat. It talks about the impact of such unprecedented social calamity and of its likely consequences – war and the threat of nuclear war. This is written, not by Greenpeace, not by Extinction Rebellion, but by Ian Dunlop, the former chair of the Australian Coal Board. The foreword was authored by Admiral Chris Barrie, the former head of the Australian armed forces.”

Wong, Offley and others arrested for blocking the pipeline terminal have argued a “climate necessity defense”: that in times of emergency, there is a necessity to break the law to prevent a greater harm from happening—in this case, to prevent runaway climate catastrophe. With the IPCC (International Panel on Climate Change) report warning us that we have only 11 years to make drastic cuts in greenhouse gas emissions, it would seem that this argument would be convincing. Indeed, there was one isolated case of a judge in the US accepting this defence. But the courts maintain that the  climate necessity defense cannot apply in this case because the climate catastrophe isn’t 100% certain, and therefore it can’t be accepted as a reason to halt tar sands pipeline expansion. (Of course, scientists will tell you that nothing is 100% certain in scientific terms until it has already happened and by then, of course, it will be too late for the planet and for us.)

Some have argued that the problem here is the judge who is hearing the cases. Indeed, Justice Kenneth Affleck is not exactly progressive; as a lawyer, he was known for his work on behalf of Big Tobacco, and he is a Harper appointee to the Supreme Court. His disdain for protestors was obvious last summer, when he threatened to have observers in the gallery removed if they refused to obey the custom of standing when he, the presiding judge, entered the courtroom. But the problem here is not the individual judge: it is a system the law upholds, which exists to facilitate extraction of resources like oil, and acts to stifle threats to petrochemical company profits, all while maintaining a veneer of “due process” and “democracy.”

In addition to arguing the climate necessity defense, Rita also grounded her actions in natural law and Indigenous law:

Courts and the capitalist system are unmoved by the science, and by the hundreds of people who have risked fines or jail time to highlight the need for decisive action on climate and against this pipeline. Even the mass movement, with its marches of sometimes tens of thousands, has only delayed the pipeline expansion; we need an even stronger movement, with mass civil disobedience and ideally also job action in support of urgent climate solutions that include not just stopping new pipelines, but also a Green New Deal-style just transition.

So how do we move ourselves closer to a place where mass civil disobedience can happen, and can start to cross the line from society at large to the workplace?  We need to continue to broaden our climate justice activism, to connect it with other fights for social justice like those for housing and decent work. And while Canadian unions perhaps can’t yet pull off a climate strike of our own, one thing we can do is ask our unions to endorse the Student Climate Strikes happening September 20 to 27 worldwide. Several unions in the UK have gone even further by calling for a 30 minute work stoppage on September 20, something our unions here could replicate.

If you are outraged that a peaceful protest is punishable by a month in jail, while climate crimes go unpunished, why not channel some of that anger into action? You could start by contacting your local Student Climate Strike committee here, or contribute to Rita Wong’s legal defense here.