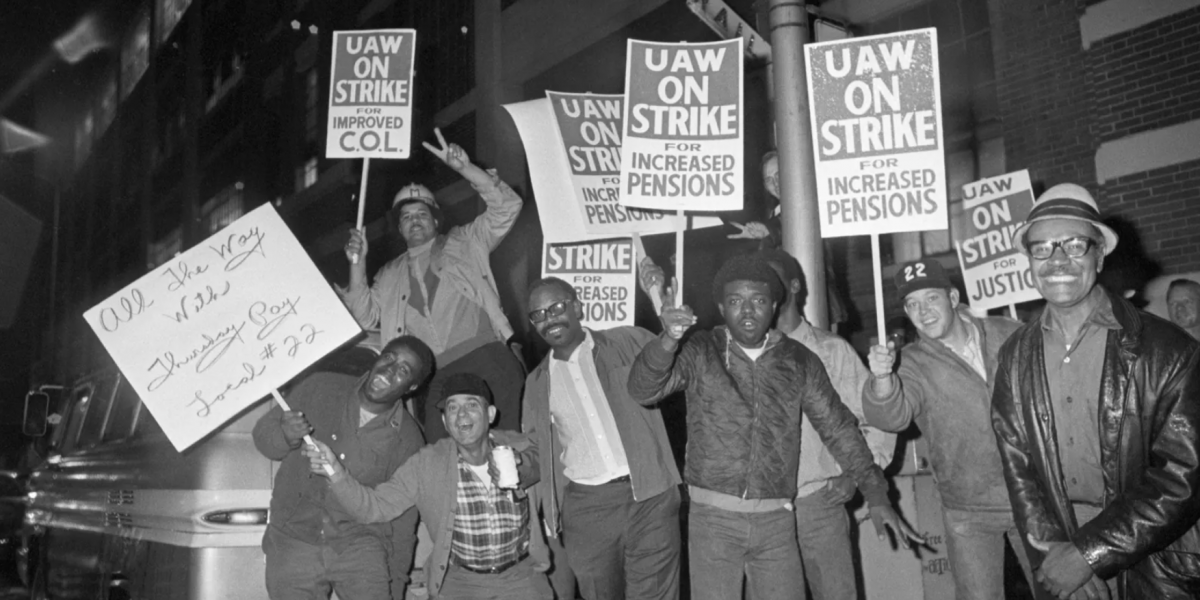 Knocking on Labor’s Door: Union Organizing in the 1970s and the Roots of a New Economic Divide by Lane Windham (The University of North Carolina Press).

Labour historians have called the 1970s “the last days of the working class.” The story commonly told about the 1970s is that the working class moved to the right, turning to the Republican party and away from unions because unions became overly bureaucratic. The common understanding continues that the progressive movements for peace and racial and gender justice faced backlash from a working class who saw their living and working standards start to decline amid the economic crisis of the decade.

Lane Windham offers an alternative view in her book Knocking on Labor’s Door: Union Organizing in the 1970s and the Roots of a New Economic Divide. Rather than being the last days of the working class, the 1970s are the “first days of a newly diversified, reshaped and energized working class.” She argues that many labor historians have been blind to the vitality of the period because they have been too focused on unionized, white men workers. Hence the period is viewed as one of backlash and defeat. Knocking on Labor’s Door focuses instead on the women and people of colour who had long been members of the working class through their paid employment, families and communities, and how new entrance into the sorts of better-paid jobs set at the heart of the nation’s economy pushed them to fight for unions and collective bargaining rights.

Windham’s thesis cuts against the false dichotomy, put forward by so many, that class rights were in opposition to civil rights. According to Windham, the fight for and passage of legislation such as the 1964 Civil Rights Act, and creation of the Equal Employment Opportunity Commission, allowed women and Black people to enter workplaces they had never been allowed in before. The energy and experience of the civil rights victories entering new workplaces and industries brought on a wave of union organizing, evidenced by the number of workers who voted in National Labor Relations Board (NLRB) elections through the decade.

The Civil Rights Act resolved some of the New Deal’s contradictions by lowering barriers to entry into the workforce, and the 1965 Immigration and Nationality Act brought new employment standards to new immigrants. These developments meant that young Black workers poured into Southern industry and women could start building careers. As Windham emphasizes, “as these groups entered the workforce in new ways, they demanded full access to the coveted, highest-paying jobs and quickly turned to organizing unions.” By the late 1970s, more than a third of Black men and nearly one in four Black women who worked in the private sector were union members.

In the 1970s nearly 5 million workers in the private sector voted in NLRB elections, while an average of 400,000 public sector workers joined unions each year. The early 1970s also saw a strike wave unparalleled since 1946. In 1970 alone, one in six of the nation’s unionized workers was on strike, including 150,000 postal workers illegally walking off the job.

“The civil and women’s right movements had changed the way working-class people, including some white men, understood their relationship to their employers. If the long-standing mores surrounding race and gender at work could crumble, then why should working people put up with disrespect, low pay and shoddy benefits on the job? The new rights consciousness from these movements fed the union fires and inspired millions of private-sector workers to try and organize for increased labor rights on the job.”

Through the book, Windham details examples in which Black and women workers worked to expand the promise of the New Deal and post-World War II compact to workers previously shut out of it. This fight in turn helped lead struggles for better pay, conditions and union recognition for all workers. Industrial workers in the south, retail workers, hospital workers, clerical workers and many other previously non-unionized workers joined unions, while others like domestic workers and clerical workers formed workers’ centres and other workers organizations outside of the AFL-CIO.

So why don’t we remember the 70s as a decade in which organized labor gained size and strength? Windham says that while millions of workers knocked on labor’s door, US employers coordinated like never before to make sure that door stayed closed. “As global competition increased in the 1960s and 1970s, US employers had begun to think that labor costs were bleeding them dry. To compete, they sought to cut costs on a number of levels, including by quashing a powerful, growing movement of new union organizing.”

The leaders of the nation’s largest corporations formed new alliances, such as the Labor Law Reform Group (LLRG), to roll back the laws protecting workers’ organizing and bargaining rights. And where these employers’ rights groups couldn’t change laws, corporations fought back against labour’s momentum by breaking labour law at a whole new level throughout the decade, employing a growing anti-union consultant industry.

Penalties for violating labor law were too weak to hold back employer aggression. The employers groups acted as a united front, using their lobbying power and organizations and the face of small business owners to help produce an environment in which “the rise in employer lawbreaking, the spread of employer anti-union campaigns deep into the nation’s core industries, and the tutorials of union consultants coalesced to undermine the potency of US labor law by the decade’s end.”

Windham draws on successful and unsuccessful case studies of several workplaces that fought for unionization and a bigger share of the social compact, to demonstrate the way these labour battles shaped the employment terrain in the decades to come. Two big examples Windham draws on to help explain the decade were the successful fight for a union at the Newport News Shipbuilding and Drydock company (the largest NLRB election of the 1970s) and the unsuccessful campaign to unionize the Cannon Mills textile workers.

Both examples demonstrate one part of the book’s main message: “that unions were still actively organizing, many [workers] did want unions, and the civil rights movement boosted–rather than weakened–their collective organizing momentum.” However, she uses the difference to demonstrate another message that comes through in the book. While Newport News faced fierce fightback from their employers, they were the only navy yard by law that could build and refurbish nuclear aircraft carriers and navy ships, and were therefore not subject to the competitive forces of the changing global economy. On the other hand, textile workers were much more subject to threats of job loss due to offshoring and the global downward pressure on wages and working conditions.

Workers in the 1970s, while deciding in large numbers to organize as a class, faced pressure from a capitalist class that was bent on reducing labour costs, a government that was not willing to protect them, and a changing global economy facing a crisis of profitability. New technologies such as barcodes and enormous container ships shifted the centrality of the US economy from manufacturing to retail. While many associate this shift as a point of defeat and a major downturn in the power of organized labour, Windham’s study of clerical and retail workers’ organizing efforts demonstrate that none of that was inevitable.

The terms of this new labour market “were determined by decisions made by employers, unions and the state.” Employers used weak labor law to fight unionizing efforts, while unions resisted the kind of no-holds barred organizing necessary to win and spent much of their time providing social provisions, like healthcare. As a result, US labour in the 1970s was too weak to uphold workers’ right to form unions, while facing a globalizing and deindustrializing economy. This put the US working class on weaker footing: far too few had access to unions and collective bargaining and this helped lay the basis for the unequal and more precarious world of work in which we find ourselves now.

The examples of Knocking on Labor’s Door remind us what is essential to rebuild working class power. For those looking for guidance for today, a few important lessons become clear: