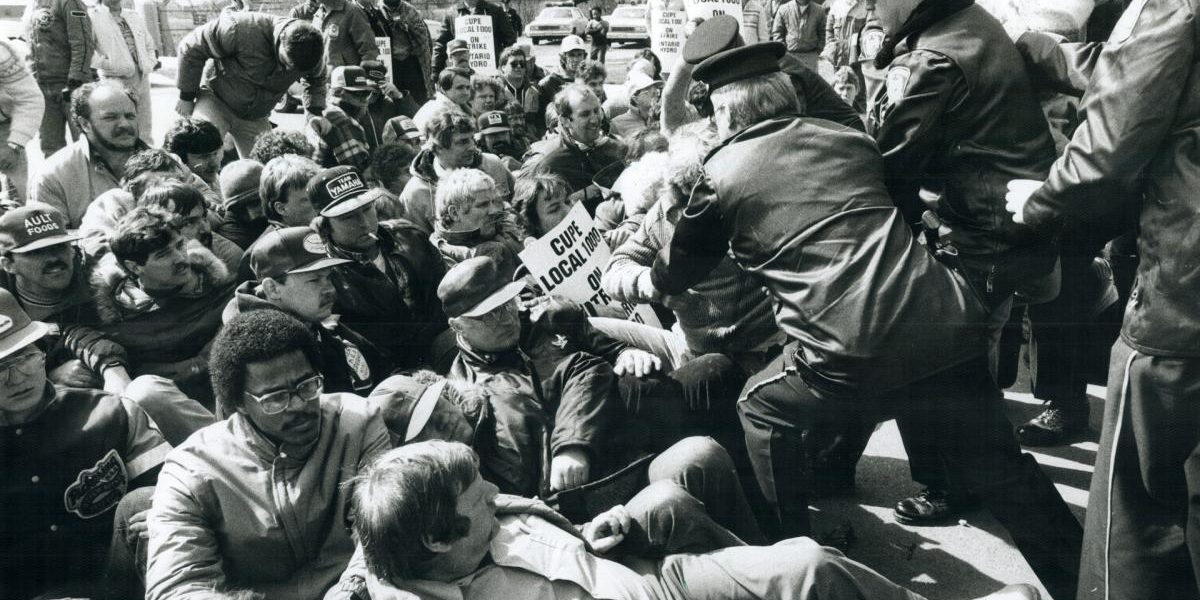 In a now deleted tweet the New York Times reported on February 14, 2022 that, by invoking the Emergencies Act in response to the right wing occupation of Ottawa, Justin Trudeau assumed power to “temporarily suspend civil liberties”.

The New York Times’ framing was misleading but not because the suspension of civil liberties is some unprecedented power grab Canadians haven’t witnessed since Trudeau Senior sent in the army to suppress the FLQ in 1970. The framing is misleading because every Liberal and Conservative government in the history of Canada has a long and consistent record of passing legislation to “suspend civil liberties” whenever those rights conflict with making profit.

As Professor Paul Daly explained in a recent blog post the Emergencies Act “regulates a broad sweep of economic activity and imposes criminal liability for a wide range of actions contributing directly or indirectly to unlawful assemblies.” However, the state has never needed emergency powers or special legislation in order to disperse “unlawful assemblies” that interfered with pipelines, golf courses, housing developments, railroads, oil refineries, or international government forums.

What is unique about invoking the Emergencies Act is not the Canadian State restricting freedom of association but whose civil liberties are being interfered with.

As noted by Adam King in a recent passage article there is evidence to suggest that the “truckers” in the Ottawa occupation are “by and large self-employed owner-operators: the small contingent of wealthier small proprietors who have made out quite well in the new wild-west of for-hire trucking. It was a “revolt” of the petit-bourgeoisie, financially backed by wealthy right-wing grifters.”

The over-representation of these sorts of small business owners in the convoy is supported by recent CBC reporting that many of truckers are not actual employees but owner-operators whose vehicles feature the logo of a larger transport company that they subcontract with.

Historically these kinds of small business owners are used to having legislation passed to suspend other people’s civil liberties in order to promote their interests. Now that they are the target, the shoe is suddenly on the other foot and the “temporary suspension of civil liberties” is making international headlines.

Any conversation about the state of “civil liberties” in Canada must be understood against this historical background and exactly which civil liberties are usually targeted via legislation and why. While the state typically doesn’t need to table targeted legislation in order to disperse “unlawful assemblies” it has routinely done so when it comes to striking workers.

What counts as a “suspension of civil liberties” is not just a legal question – it is a question of ideological framing and political commitment.

Freedom of association and the right to strike

Striking has been recognized as an essential component of freedom of association in international law for at least 70 years. In 1952 the United Nations’ Governing Body Committee on Freedom of Association first recognized the right to strike as an “essential means through which workers and their organizations may promote and defend their economic and social interests.”

In 2015 the Supreme Court of Canada finally caught up with international law in Saskatchewan Federation of Labour v. Saskatchewan, 2015 SCC 4 (CanLII), where it recognized a limited right to strike as a protected form of free association under section 2(d) of the Canadian Charter of Rights and Freedoms.

Notwithstanding this “recognition” the state has routinely tabled legislation suspending worker’s freedom of association whenever there is a concern that worker demands might inconvenience business owners.

In 2021 Conservatives and Liberals joined forces to pass Bill C-29 which ordered 1150 CUPE dock workers back to work after they walked off the job in April. Labour Minister Filomena Tassi is reported to have justified this suspension of dock workers’ civil rights on the grounds that if the strike was allowed to continue it would cost the economy $40 million to $100 million per week, directly threatening 19,000 jobs.

If the legislature was so concerned with the strike’s impact on the wider economy they could have pressured the Maritime Employers Association to reverse its decision to change working conditions that initially triggered the strike. Afterall, the Montreal Port Authority is a federal agency created under the Canada Marine Act that leases its facilities to the private stevedoring companies that in turn employ CUPE dock workers. It has the power to apply this kind of pressure. However, when “Top business leaders urge Ottawa to end labour dispute at Port of Montreal”  Liberal and Conversative MPs know which side they are on.

Dockworkers’ freedom of association was violated in order to protect the profit margins of the very trucking businesses now taking part in the convoy. Unspringingly there was no outcry of tyranny, or New York Times headlines, when the state passed legislation that suspended workers’ civil liberties in order to protect business owners’ bottom line.

In 2018 Liberals and Conservatives once again joined forces in a special session which took place in the dead of night to pass Bill C-89 ordering CUPW postal workers back to work after a month of rotating walkouts. Labour Minister Patrica Hajdu justified the suspension of postal workers’ freedom of association on the ground that small businesses that rely on the postal service could go bankrupt if the “situation”  isn’t remedied quickly. While the constitutionality of Bill C-89 was challenged by CUPW and is currently before the courts the purpose of the legislation was achieved: postal workers were forced back to work.

Once again it was workers’ civil liberties that were suspended in order to protect the profits of small business owners. Freedom of association stops where interference with profit begins. Like with the dockworkers, if the federal government was concerned about the strike’s impact on other businesses it could have easily pressured Canada Post to meet postal worker demands. Afterall, Canada Post is a Crown Corporation whose Board of Directors is directly appointed by the federal government. There was no appetite to apply such pressure because, and it bears repeating, Liberal and Consverative MPs know which side they are on.

Shortly after Bill C-89 was enacted Tony Tracy and five other trade unionists  were arrested on the charge of obstructing police and mischief for picketing a Canada Post sorting facility. Behind every piece of back-to-work legislation lies the implicit threat of imprisonment at the barrel of a gun. No emergency powers are required.

In fact, mere silence has been deemed a sufficiently grave offense to justify throwing striking workers in jail. In 1980 the president of CUPW postal workers Jean-Claude Parrot was sentenced to three months imprisonment for refusing to tell his co-workers that their strike was deemed illegal by the federal government.

In 1978 the federal legislature passed Bill C-8 the Postal Services Continuation Act which ordered striking CUPW postal workers back to work and required the leadership of the union to give notice to their members that  any  direction to go on strike which had been issued  prior to the back-to-work legislation had now become invalid. When the CUPW president refused to be used as a mouthpiece by Canada Post to persuade outraged  postal workers back to work he was charged and convicted under section 115 of the Criminal Code which, at the time,  made it an criminal offense to contravene a law of the Parliament of Canada which did not prescribe a penalty for the law’s violation.

Jean-Claude was ultimately thrown in jail for not saying anything at all. That is the legacy of “freedom of association” in Canada: get back to work or suffer the consequences.

So when Canadian pundits get outraged at the New York Times for mischaracterizing the Emergencies Act it is important to put the state’s suspension of civil liberties via targeted legislation in its historical context. The state has always had the power to “suspend civil liberties” and has routinely done so for strikes, park encampments, Indigenous blockades, and leftist protests. The major difference is that these kinds of infringements have become so common and routine that they don’t even register as a “suspension of civil liberties” to the Canadian punditry and the broader public anymore.

The most worrying aspect of invoking the Emergencies Act is not the state giving itself powers it never dared to use prior to the Ottawa occupation, but a shift in civil society regarding when it is permissible to crack down on protests that disrupt economic activity.

Doug Ford’s Conservatives have just recently signaled their intention to pass a bill that increases the province’s powers to prevent demonstrators from blocking access to critical infrastructure such bridges, border crossings and railways. While the government doesn’t need new laws to crack down on protests engaging in these tactics, news laws will make it easier and it sends a signal to anyone engaging in protests. The left would justifiably and loudly oppose this legislation if this legislation was tabled shortly after the Ontario railway blockades that were erected in solidarity with Wet’suwet’en land defenders in 2020. It is now worrisome that some Canadian pundits will wring their hands and equivocate that it is only fair for security forces to crack down equally on white supremacist convoy organizers like Pat King and Indigenous land defenders whenever a demonstration impacts “critical infrastructure” and the profit margins of business owners.

We don’t need more repressive state powers to be enshrined in legislation to fight the far-right. What we need is for the state to stop using the power it already possesses to repress land defenders and workers and to start actually putting people before profits.