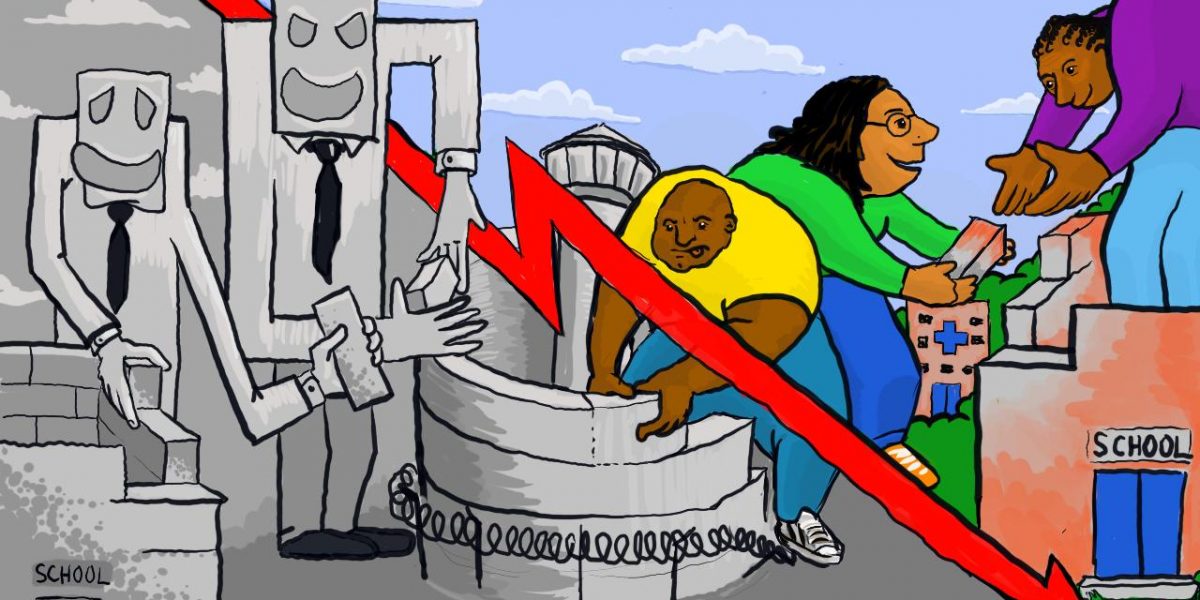 Since the emergence of the COVID-19 pandemic, researchers, legal experts, public health officials, and activists, alongside prisoners and their loved ones, have been publicly advocating for an immediate and comprehensive plan to decarcerate and reintegrate Canada’s federal and provincial prisoners. Engaging in substantial social media campaigns using the hashtags #PublicHealth4All, #ContainCovid19NotPeople, and #ReleaseSavesLives among others, drafting open letters, and staging prison support caravans, it appears that such efforts have begun to bear fruits, as provinces across so-called Canada have seen the release of as much as one quarter of their incarcerated population.

While the successes of our movements to release prisoners can be celebrated and built upon, we in the abolition movement also need to expect and prepare for the state to initiate a new wave of criminalization and incarceration in response to the deep recession we are entering. In this article which is part one of a two-part series, I lay out the basic relationship between capitalism and prisons with regards to surplus labour, and review some important historical patterns which I hope will help prisoner’s justice advocates predict the state’s next moves, and strategize our own response in turn.

Capitalism is a system which produces surpluses, surplus value (ie. profits or potential profits) and surplus labour (ie. unemployment). Under capitalism, prisons perform a central function – they spatially and temporally ‘fix’ these surpluses which are generated by capitalist production, but which lack a space to be ‘productively’ realized. To understand the relationship between capitalism and prisons it is necessary to examine what Karl Marx referred to as the reserve army of labour (RAL).

The RAL, according to Marx, is no mere accident of capitalism, nor is it the product of particularly pernicious capitalists. It is a structural necessity which helps to maintain and expand the potential for surplus value production. On the one hand, having an excess of ‘idle’ or underemployed labour creates a pool of hyper-mobile workers who can be shifted into and out of various geographical and sectoral spaces of production as the rhythms of the production process adapt new ‘labour saving’ forms of technology. On the other hand, the unemployed and underemployed serve a disciplinary function. They represent those who – absent adequate work – are forced to accept conditions of employment that others organize to resist.

This reserve pool of labourers is often mobilized and manipulated to undermine labour organization in the workplace, maintaining a constant downward pressure on the costs of labour and thereby maintaining and expanding the production of surplus value. However, the balance is fine – it is necessary to have these mobile and manipulable workers, yet too many and they may themselves organize to disrupt the precarious balance of social relations. Thus, in periods of exceptional labour market transformation, where the ranks of the RAL swell, prisons serve to absorb potentially volatile surpluses.

In Golden Gulag (2007), Ruth Wilson Gilmore documented this very phenomenon through an exploration of California’s prison construction boom throughout the 1980’s. The 1980’s saw an enormous number of manufacturing jobs shed to make way for neoliberal restructuring which included a shift to offshore production and precarious migrant labour. The social safety net of the Keynesian era had all but withered away. Alongside this restructuring came an expansion of the reserve army of labour, disproportionately Black and Latinx communities whose potential politicization loomed dangerous to ruling classes. The War on Drugs became the ruling class solution to the threat from below.  Contrary to data at the time, a ‘drug pandemic’ associated with greater rates of crime was generated leading to the swift and violent incarceration of entire communities  – often the very Black and Latinx communities who had been thrown out of the labour market by neoliberal restructuring.

The next major phase of this phenomenon appeared in the mid 2000’s, really gaining momentum following the Global Financial Recession. Here, once again, a major shift in the economy and concomitant reorganization of labour markets, precipitated the formulation and subsequent crackdown on alleged criminal threats – this time in the form of ‘the immigrant’. Following the global recession, major job losses occurred in sectors like manufacturing, construction, warehousing, retail and transportation, all of which were occupations that had employed high percentages of precarious migrant workers. Unsurprisingly, then, the post-recession period was one in which the figure of ‘the migrant’ was subjected to heightened criminalization and detention.

The current COVID-19 pandemic has brought on a recession which threatens to be deeper and more widespread than anything we have seen since the Great Depression. While the current trends in decarceration that we are witnessing in Canada, and across the globe, bring with them a glimmer of hope, we cannot be complacent or naïve. The next several years will be telling in terms of which sectors of the economy bounce back, which are bailed out by governments, and which are left to languish and ultimately collapse. If history has told us anything, it is that those populations who find themselves left by the wayside of capitalist restructuring are likely to become the subjects of a new ‘moral panic’ subject to the criminalizing gaze of the state.

These historical patterns highlight how much capitalism relies on criminalization and prisons, and therefore what an existential threat decarceration poses to capitalism. As a result, our ability to build on our decarceration successes in the long-term will rely on our ability to build the people power necessary to put capital back on the defensive.