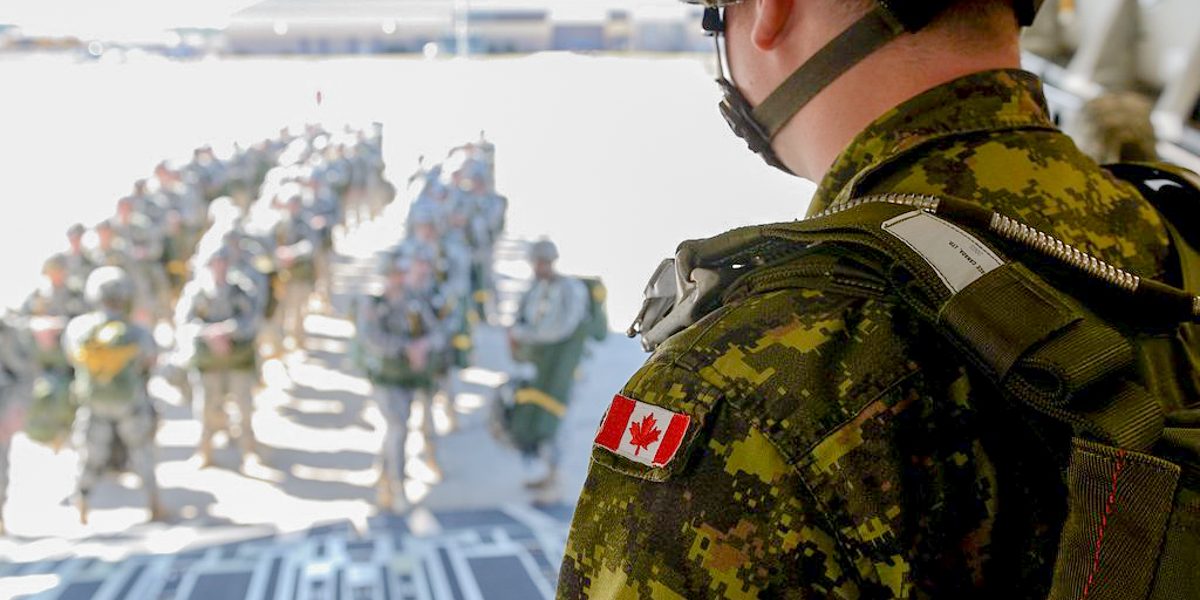 The business of war is very profitable for a few weapons makers and generals who end their careers as high paid shills.

Wayne Eyre, Canada’s Chief of Defence Staff, previously called for “the defence industry to go into a wartime footing.” He has claimed that we are at war with China and Russia, who could soon seize Canadian territory in the Artic, and a recent year-end review interview, Eyre added that Canada may have to militarize like it did at the start of World War II. “I often challenged the team [military planners] to look at history. What did we do in 1939?”

The recent warmongering by the head of Canada’s military is a troubling escalation that must be called out. But it is erroneous to frame his reaction as a fundamental change. Instead it is part of the Canadian Force’s longstanding bid to further militarize society and deepen ties to the world’s preeminent military power.

While Eyre has been particularly aggressive with his rhetoric recently, the Canadian Forces have long promoted what some euphemistically describe as “forward defence”. Drawing a dubious hockey analogy, Chief of the Defence Staff Rick Hillier claimed in 2005 “the best defense for Canada is a good offense. We must play a significant part in the world to prevent that violence and conflict coming home.” Echoing this thinking, the 2017 “Strong, Secure, Engaged: Canada’s Defence Policy” claims the CF has to “actively address threats abroad for stability at home” and that “defending Canada and Canadian interests … requires active engagement abroad.” A logic that can, of course, be used to justify participating in endless US-led military endeavors.

Which is their hope. In 2012 Chief of the Defence Staff Walter Natynczyk told the Canadian Press: “We have some men and women who have had two, three and four tours and what they’re telling me is, ‘Sir, we’ve got that bumper sticker. Can we go somewhere else now?’” The general added that “you also have the young sailors, soldiers, airmen and women who have just finished basic training and they want to go somewhere and in their minds it was going to be Afghanistan. So if not Afghanistan, where’s it going to be? They all want to serve.”

The Canadian Forces’ predilection for war periodically seeps into the press. “We’re going to be warfighters”, were the words Adam Moore, commander of the 3rd Battalion, Princess Patricia’s Infantry, used to dismiss a new crop of soldiers in 2018.

Over the past three decades Canada has openly participated in a series of unprovoked, large-scale wars (Iraq 1990-91, Serbia 1999, Libya 2011 and Afghanistan 2001-14). The military also quietly participated in another large-scale war (Iraq 2003) and medium scale war (Iraq/Syria 2014 – 2023) in which the Ottawa Citizen reported recently that Canadian special forces were involved with the US military team accused of killing many civilians.

The Canadian military has also invaded to overthrow an elected government (Haiti 2004) and returned six years later partly to ensure a popular president didn’t return from exile. Canadian Forces have also been involved in violent UN missions (Somalia 1993, Yugoslavia 1991–95). Over the past three decades the Canadian military has participated in dozens of other politically charged or belligerent deployments such as training Palestinian security forces to oversee Israel’s occupation and strengthening the Ukrainian military as part of a low-level proxy war with Russia. They’ve also participated in naval missions that tested Nigerian, Iranian, Chinese and other countries’ sovereignty.

What makes Eyre’s current bombast particularly troubling is the geopolitical ramifications. At the end of October the head of the Canadian military told Parliament that nuclear armed China and Russia considered themselves at war with the West and two weeks later added that those two nations will increasingly challenge Canada’s “tenuous hold” over its territory in the Arctic. Simultaneously, he’s calling for industry to be placed on “wartime footing” and for military planners to prepare for a WWII style conflict.

Alongside the ominous rhetoric Canada is effectively at war with Russia. Canadian special forces and former troops are in Ukraine while Canada shares intelligence, trains Ukrainian troops and delivers huge quantities of arms. Concurrently, Canada also has significant numbers of troops on Russia’s border in Latvia and elsewhere in the region. With regard to the other nuclear-armed state Eyre says it is at war with us, Canada recently released an Indo-Pacific Strategy targeting China and has praised Japan and South Korea for announcing a military buildup. Canada has also increased the number of frigates and patrol aircraft working with US forces in the region to target China.

Amidst these geopolitical winds, leftists, environmentalists and humanists of all sorts need to counter General Eyre’s rhetoric. The year 2023 needs to be one in which internationalists rein in the elites and militarists on all sides who are driving humanity towards the abyss for love of empire and arms firms’ profits.