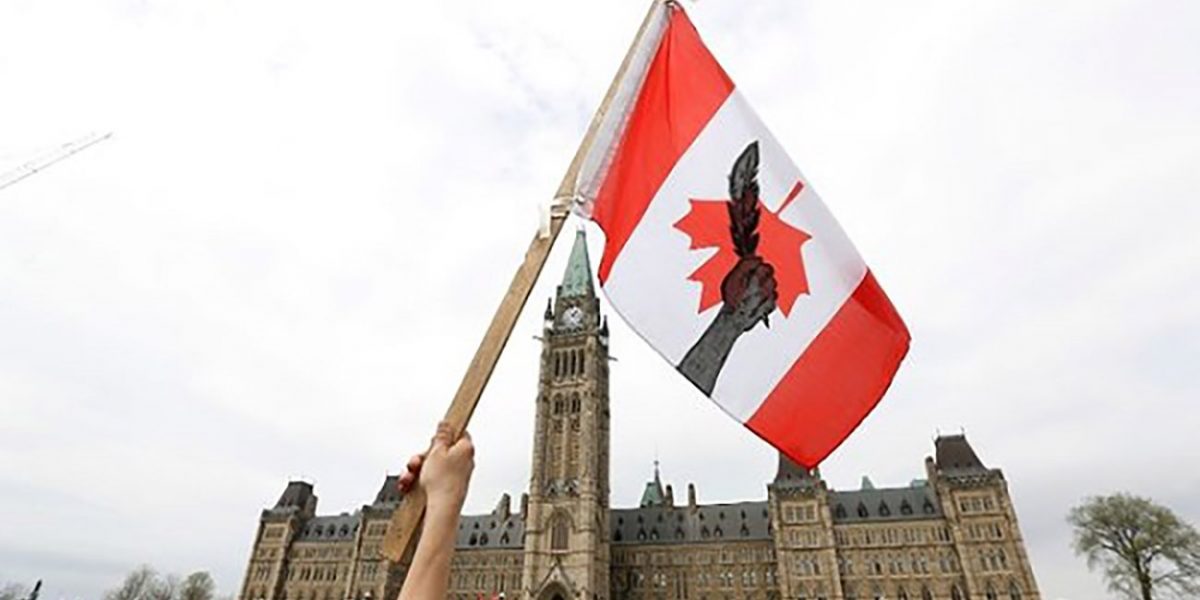 Justin Trudeau once boasted that Canada is “without some of the baggage that so many other Western countries have” including “colonial pasts.” But this Canada Day happens in the wake of the final report from the National Inquiry into Missing and Murdered Indigenous Women and Girls, which concluded that “Canada’s past and current policies, omissions, and actions towards First Nations Peoples, Inuit and Metis amount to genocide.” The history of Canada Day has been one of colonization through different phases, but Indigenous peoples have continued to expose this ongoing history, assert their sovereignty and build solidarity.

“The Americas were first portrayed as terra nullius on European maps. But in almost all cases, Europeans were met, at time within minutes of their arrival, by Indigenous peoples. There was an attempt to get around this inconvenient fact by declaring us non-human, but this was difficult even for Europeans to sustain over time. The doctrine of discovery remained because it was a fig leaf they could use to cover naked thievery.”

This began with the fur trade, a term which implies mutual exchange but which was marked by warring British and French empires who dispossessed Indigenous peoples from their land—including targeting Indigenous women to undermine the leadership role they played in their communities. As Mi’kmaq activist Pam Palmater explained,

But the colonial economy remained dependent on Indigenous labour—from Metis fur trading communities who emerged in the prairies, to First Nation fishers and canners on the west coast. As the industrial economy emerged, it came into conflict with the fur trade economy—which opened up space for resistance movements to assert themselves. As Metis historian Howard Adams explained in Prison of Grass: Canada from a Native Point of View,

“The conflict between two different economic systems—the old economic system represented by the Hudson’s Bay Company and the new industrial system. This new ruling class of British financiers and Canadian industrialists had consolidated its position in Eastern Canada and was now extending its empire westward across the prairies. They wanted not only the land and the resources of the Northwest, but also a capitalist order that would consolidate and further their economic enterprises, so it was natural that they encountered opposition from the old order of the Hudson’s Bay Company. The clash of these two economic systems fuelled the hostilities of 1869-70 in the Northwest, which resulted in Rupert’s Land being brought under the constitutional authority in Ottawa, the seat of the industrial empire.”

Canada Day marks the signing of the British North America Act on July 1, 1867, to create the Dominion of Canada—which occupied Indigenous territories in the provinces that settlers called Nova Scotia, New Brunswick, and sections of Quebec and Ontario. The British had defeated the French, taken colonized territory previously under their control, and continued to oppress the francophone settler population in Quebec. Canada Day “celebrates” the consolidation of this new settler state—built on the national oppression of Quebec and the expanding colonial occupation of Indigenous nations.

When the Canadian state claimed control over a huge section of Indigenous territory that settlers called Rupert’s Land, John A Macdonald explained that “all these poor people know is that Canada has bought the country from the Hudson’s Bay Company and that they are handed over like a flock of sheep to us.” But Indigenous peoples continued to assert their self-determination, and built solidarity. In 1869 the Metis set up a provisional government at Red River, led by Louis Riel and with support from local settlers and from francophones in Quebec. When the Canadian state invaded their territory and continued to expand, there was another wave of land defence in 1885—led by Cree and Metis communities, and local settlers.

“Nation builder” John A Macdonald was only able to expand the Canadian state by trying to destroy Indigenous nations—including military invasion and execution of Indigenous leaders (including Metis leader Louis Riel, and Cree leader chief Poundmaker); decimation of the buffalo and deliberate denial of food; an Indian Act to undermine Indigenous democracy and women’s equality; a pass system to control Indigenous movement and bans on ceremonies; and residential schools that enforced cultural genocide, imposed a gender binary to oppress two spirit Indigenous peoples, and assimilated Indigenous people into the capitalist workforce. As Cree historian Mary Jane McCallum explained in Indigenous Women, Work and History:

From White Paper to Red Power

A century after its formation, the Canadian state moved to “modernize” itself: establishing a Bill of Rights in 1960, a new flag in 1965 (the first time the maple leaf was used) and attempting to complete its assimilation project in 1969. During Canada’s transition from official apartheid state to colonial welfare state, residential schools began to decline and the pass system ended in the 1940s. In addition, some aspects of the Indian Act were repealed in 1951—like the bans on the potlatch and Sun Dance. In 1960 Indigenous people were finally allowed to vote without giving up their status.

But colonial assimilation and control continued in new forms. Indian hospitals forcibly removed and confined Indigenous people made ill by colonization, child welfare services used colonial conditions to justify further theft of children from their communities, and when the pass system ended the era of mass incarceration began—using a new tactic to control Indigenous people displaced from their land, marginalized from labour and increasingly living in urban centres.

The Canadian state celebrated its centenary in 1967. But when Tsleil-Waututh chief Dan George spoke at the event in Vancouver, he delivered a Lament for Confederation:

“Today, when you celebrate your hundred years, Oh Canada, I am sad for all the Indian people throughout the land. For I have known you when your forests were mine; when they gave me my meat and my clothing. I have known you in your streams and rivers where your fish flashed and danced in the sun, where the waters said ‘come, come and eat of my abundance.’ I have known you in the freedom of the winds. And my spirit, like the winds, once roamed your good lands. But in the long hundred years since the white man came, I have seen my freedom disappear like the salmon going mysteriously out to sea. The white man’s strange customs, which I could not understand, pressed down upon me until I could no longer breathe. When I fought to protect my land and my home, I was called a savage. When I neither understood nor welcomed his way of life, I was called lazy. When I tried to rule my people, I was stripped of my authority.”

He concluded with a call to “shatter the barriers of our isolation. So shall the next hundred years be the greatest in the proud history of our tribes and nations.” That year another wave of Indigenous activism began, on both sides of the colonial boarder, and in the context of the anti-war, queer and women’s liberation, and Black Power struggles of the 1960s—from the Native Alliance for Red Power in Vancouver to Mohawk activist Mary Two-Axe Earley launching the Equal Rights for Native Women to fight the sexist provisions in the Indian Act.

When Pierre Trudeau introduced his “White Paper” on Indian Policy in 1969, trying to complete assimilation by abolishing Indigenous rights, it ignited a Red Power movement across the country. This mass movement not only defeated the legislation and asserted Indigenous rights, it also forced the Canadian state to alter its tactics. As Dene scholar Glen Coulthard explained in Red Skin, White Masks: Rejecting the Colonial Politics of Recognition,

“The expression of Indigenous anticolonial nationalism…forced colonial power to modify itself from a structure that was once primarily reinforced by policies, techniques, and ideologies explicitly oriented around the genocidal/assimilation double, to one that is now reproduced through a seemingly more conciliatory set of discourses and institutional practices that emphasize our recognition and accommodation. Regardless of this modification, however, the relationship between Indigenous peoples and the state has remained colonial to its foundation.”

Rejecting the colonial politics of recognition

We can see this shift from Trudeau senior to Trudeau junior. In the 1960s, Pierre Trudeau tried to impose a White Paper forcibly assimilating Indigenous peoples. A generation later, Trudeau junior campaigned on respecting the UN Declaration on the Rights of Indigenous Peoples, bringing justice for missing and murdered Indigenous women, and supporting climate justice and reconciliation. But ongoing Indigenous sovereignty and solidarity movements have exposed Trudeau’s real record.

Canada celebrated its 150th anniversary on July 1, 2017 in the midst of an epidemic of Indigenous youth suicides and a Prime Minister committed to “nation building” through pipelines that pollute Indigenous territories. While the Canadian state was celebrating its colonial history, Indigenous people and their allies were pushing to decolonize it. In honour of the recent passing of Arthur Manuel, Idle No More called for a national day of action in support of Indigenous self-determination, called “UNsettling Canada 150”:

“We recognize and affirm that jurisdiction over our lands, territories, and resources is inseparable from the issue of self-determination over our peoples. Violence against women, trans, and two-spirit Indigenous peoples is connected to the loss of authority over our lands. It is worsened by extraction industries that attempt to claim ownership to our lands and our people through acts of violence.”

That year saw a wave of protest to remove colonial statues and names—which had growing settler solidarity. The Elementary Teachers Federation of Ontario who passed a resolution to drop the name of John A Macdonald from its schools, “to recognize his central role as an architect of genocide against Indigenous peoples, the impact that this has had on the relationship between Indigenous students and non-Indigenous students, parents, educators, and the ways in which his namesake buildings can contribute to an unsafe space to learn and to work.”

This Canada Day is happening in the wake of the report on Canada’s genocide, exposing the ongoing history of colonial violence. But this year is also the 150th anniversary of land defence against Macdonald at Red River, the 50th anniversary of the Red Power movement’s defeat of Pierre Trudeau’s White Paper, and in the midst of rising movements against Justin Trudeau’s pipelines—from the Unist’ot’en camp to Tiny House warriors—showing an ongoing history of resistance and solidarity.

Regardless of the colonial tactics of Canadian state—from apartheid, to assimilation, to recognition—Indigenous peoples have continued to assert their self-determination. This has been strongest when intertwined with other movements, from the 1960s struggles against war and oppression to today’s movements against austerity and climate change. Learning from and supporting Indigenous sovereignty and allied movements brings us closer to a world of national liberation, women’s liberation, queer liberation, and environmental sustainability that is not only possible but urgently necessary.