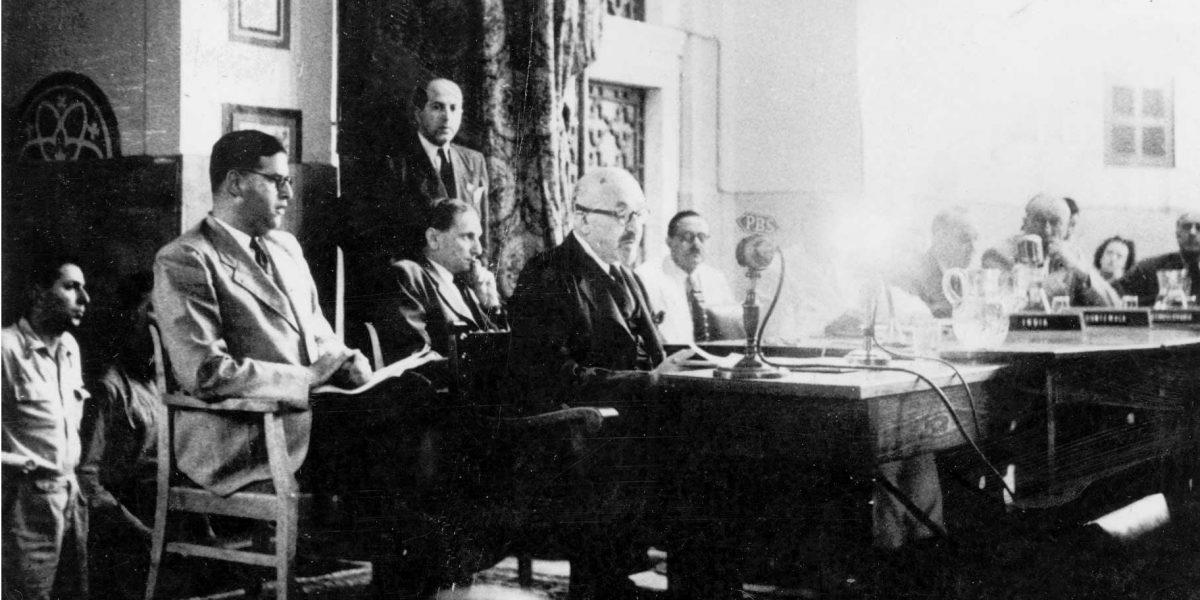 For more than 73 years, Palestinians have been murdered, displaced, and made refugees as a means of housing settlers in the colonial state of Israel. People worldwide have called on their leaders to condemn the actions of the Israeli government but have been met with either complete silence or a blatant refusal to acknowledge the ethnic cleansing of the Palestinian people. Canadian leaders have not only been hesitant to speak about the plight of the Palestinians, they are by and large supportive of the actions of Israel.

As the violence in Palestine continues there has been plenty of discussion about how the United States’ imperialism has and continues to fund the Israeli-led genocide, but the role Canada played in turning Palestine into a settler colony is less well known.

Following World War One, the allied powers recognized the British empire’s legal authority over the Palestine, enshrining the colonial mandate system outlined in the Balfour declaration. During the interwar period of the mandate system, the British government facilitated the immigration of European Jews to Palestine, and the Jewish population in Palestine increased from 9 percent to 27 percent by 1935. The British government was engaging not just in colonial rule of Palestine, but the act of colonization that paved the way for self-determination of Jews in Palestine at the expense of the non-Jewish population.

After World War Two the British government announced their intention to end the mandate and placed what was referred to as the question of Palestine before the newly formed United Nations (UN). The UN created the UN Special Committee on Palestine (UNSCOP) in 1947 to plan the future of Palestine. The committee consisted of representatives from eleven countries – Australia, Canada, Czechoslovakia, Guatemala, India, Iran, Netherlands, Peru, Sweden, Uruguay and Yugoslavia – who listened to testimonies and considered Jewish, Christian and Islamic interests so that they may come to a decision on what to do with the land and the people.

This process took place over a period of three months in a series of meetings and came to an end in August 1947, when the majority of appointed country members decided that Palestine should be partitioned between Palestinians and Zionists. Once the final decision had been made, a smaller group of representatives from the original eleven drafted a report detailing how the country would be partitioned and what rights would be maintained, given or taken, with Canadian representative Ivan Rand taking the lead on stipulations for a proposed partition plan in the final report submitted by UNSCOP.

In the report, representatives claim that the only way to quell the tension is to split the country into an Arab State and a Jewish State with Jerusalem becoming a city of neutral holy territory – an unfavourable recommendation made by Rand and fellow members from Peru, the Netherlands and Sweden.

It was then recommended that the British Army begin removing Palestinians from their homes immediately to make room for incoming Jewish settlers and assure the land was physically divided within a year. In a document archived by the UN, the authors acknowledge the Palestinians’ disapproval of the proposed plan but deem it justified given that the final arrangements would be sanctioned by the UN, who promised not to allow any further loss of land beyond what was proposed in the initial segregation outline. This was of course untrue, as a majority of Palestinian land was given to Jewish settlers and has been annexed numerous times since the official establishment of the Zionist colony in 1948.

In the archived UNSCOP reports and transcripts, Rand has a small but significant presence as he influences the adoption of committee-specific regulations, suggests the active involvement of legal powers in council proceedings, continually amends committee proposals and statements, and requests involvement in the subcommittee responsible for finalizing partition plans. He can be interpreted as guiding council discussions through his method of first observing the direction of the conversation followed by offering solutions and/or additional questions to points raised by his fellow committee members. There are rare moments when Rand’s arguments are disputed, and when they are he is persistent in his assertions.

He also advocated to include extensive Zionist oral testimony in their examination of the issue, leaving little room for native Palestinian citizens to make their case, being that he felt the council contained enough information about Palestinian culture and life to continue without their opinion. Therefore, despite protest from a few delegate members, the committee proceeded with their proposal without any commentary from Christian or Muslim Palestinians, with Rand stating that they were welcome to express their nuances but refusing to appeal to their demands.

Ivan Rand was a defining member in the ultimate colonial decisions that uprooted the lives of hundreds of thousands of Palestinians. He was generally considered a crucial delegate because of his tendency to ask for both Palestinian and Zionist matters to be taken into consideration, although he implicitly drove the committee to act in favour of the Jewish colonists. One such example is his interrogation of a Palestinian reverend regarding Christian shrines, which can be read as condescending and undermining as he questions the reverend about ownership of holy land and religious monuments.

Before his role in authoring the definitive proposal, it was clear that the Canadian representative was determined to see the partitioning of the country into two separate states. In his questioning of Judah Magnes, co-founder of the Ihud Zionist political party, Rand forcefully discusses the possibility of land division, pushing the idea into all aspects of the conversation held between the two men, making it clear that it was always the goal of Canadian leaders to aid Zionists in colonizing Palestine.

In part of his conversation with Rand, Magnes testifies that Zionists are not in favour of partition because it is their goal and assumed right to take all of Palestine, not just a part of it:

“Now if you think that by this division, this partition, you are answering the century-long yearning of the Jewish people for a niche in the world, for a home, for their own State, I think myself that is a mistaken conception. This does not answer the Jewish need for that. It is too small. It has too large a minority of Arabs in that particular State, too many administrative, economic, social and educational difficulties. If you could give to the Jewish people Palestine, all of Palestine, as many of our Jews want—we have our parties who say that all of this talk, all our talk and the partition talk and the rest of it is all rot; what the Jewish people require is Palestine on both sides of the Jordan River—and some go as far as the Euphrates River.”

Canada helped Magnes and his supremacist movement mostly achieve this goal by first pushing for separate states then advocating for an arrangement that favoured Jewish settlers. According to the Canadian Foreign Policy Institute, in the years since the illegal occupation of Palestine, Canada has been considered one of Israel’s closest allies. And as recently as 2016, the Trudeau government voted against a motion presented by the United Nations that would give Palestinians rights in their homeland.

Rand’s actions are a broader reflection of the Canadian state’s imperialist logic – refusal to denounce human rights violations, covertly aiding oppressive states and wavering in its devotion publicly to avoid scrutiny. A country often well revered for its apparent progressiveness has not only been complicit in a decades-long genocide but played a foundational role in the settler-colonial project of Israel.