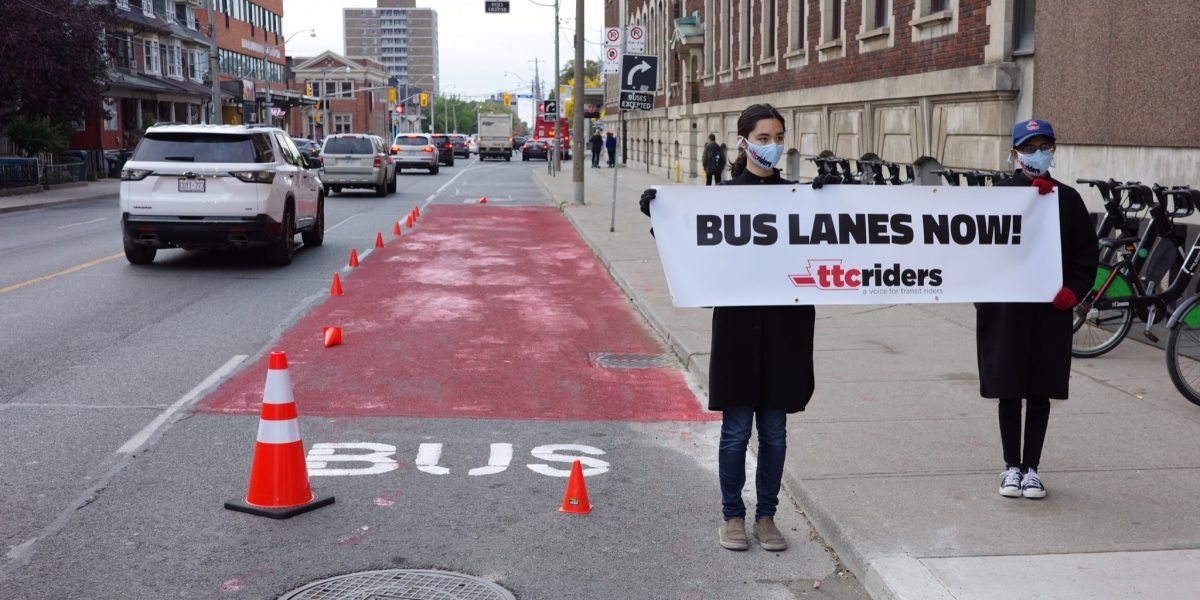 Volunteers from the membership-based transit advocacy organization TTCriders gathered outside Dufferin Station early this morning to help City Councillors deliver on a promise they made to their constituents back in 2020: to install bus lanes on five of the busiest routes in the city’s transit network.

In a press release issued by the group in support of the action, TTCriders member Vincent Puhakka issued the following statement;

“It took a handful of volunteers 20 minutes to do what John Tory hasn’t been able to accomplish in eight years. Surely Toronto’s Mayor and City Council can move faster to prioritize buses and streetcars, not just here on Dufferin, but across the city. This pop-up will wash away soon, but our need for more bus lanes will remain.”

Donning orange safety vests, the volunteers demarcated a roughly 20 metre bus lane on the southbound side of Dufferin near Dufferin station using a water-based red paint. The volunteers directed traffic to use the second south-bound lane on Dufferin while the paint was drying to avoid any damage to vehicles.

“This morning volunteers have shown installing bus lanes is simple, we just need the political will to do it,” said TTCriders spokesperson Shelagh Pizey-Allen, speaking with press at the scene.

For the advocacy group, access to public transit is an intersectional issue with implications for racial, gender, and environmental justice. “Unequal access to affordable, high-quality, and frequent public transit is a public health and equity issue that disproportionately affects low-income people, people with disabilities, and Black, Indigenous, and people of colour in Toronto,” the group’s website notes.

Dufferin street is one of the five transit corridors that the TTC has prioritized for bus lanes as one of the busiest routes for transit users. It’s also an especially important transit route for working class residents of the city, many of whom rely on public transit to get to work.

“Dufferin moves tens of thousands of transit users every day,” Pizey-Allen noted. “Right now, most TTC users are shift workers, women, lower income, and racialized people. And they are mostly taking long bus trips. Thousands of people are losing precious time waiting behind vehicles with one or two people in them, and that’s not fair” she continued. “We want to make the roads work for transit users.”

A win-win for transit and road users

“Bus lanes are a win-win for transit users and all road users because they make it easier, more reliable and faster to use public transit. People will switch to taking transit if they can rely on the bus,” Pizey Allen noted.

On their website, TTCriders has developed a tool which allows users to learn about and track the transit commitments of candidates for City Councillors, Mayor, and School Trustees. If you support the installation of bus lanes for a more efficient, sustainable, and just transit system add your name here.