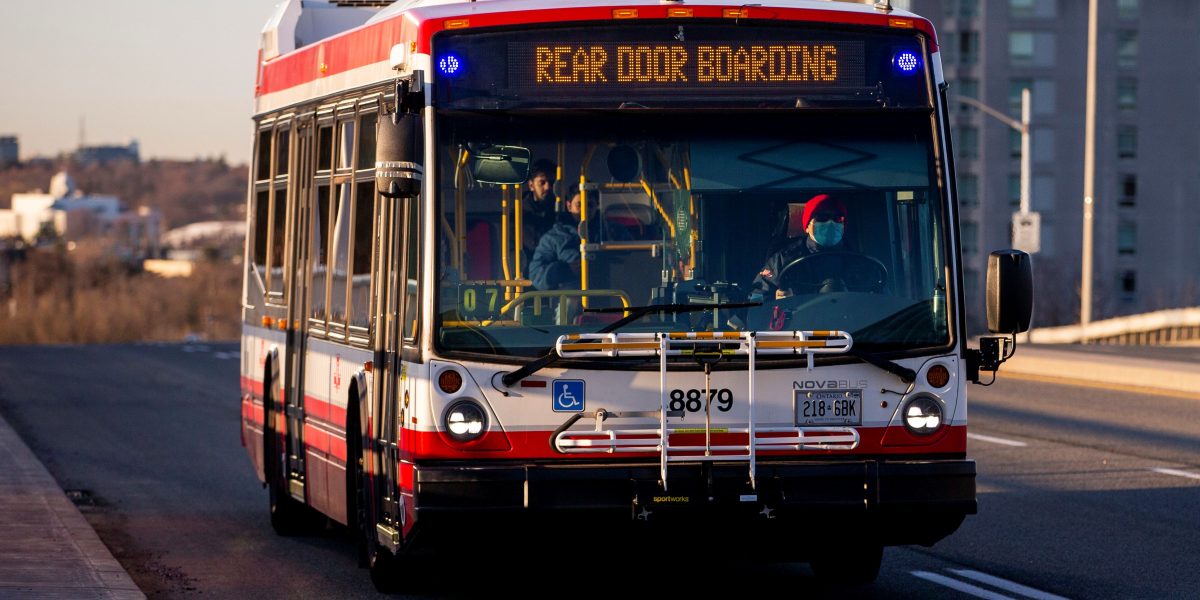 During COVID-19, the Toronto Transit Commission (TTC) has narrowly averted total and complete crisis— at least for now. Though cutbacks throughout the course of the pandemic have frustrated riders and made transit a major public health concern through overcrowding, the city recently announced that fares will be frozen in 2021 and that service levels will soon increase to pre-COVID levels.

Following announcements of provincial funding, the previously-planned disaster cuts (which would have seen service literally cut in half) have been avoided. And with city government hopeful that more emergency funding will arrive, the TTC’s restoration of service leaves many cautiously optimistic about the next year.

But the TTC’s future is far from assured. If predictions about a “new normal” are to be believed, a large-scale battle for the future of public transit in Toronto is still going to ensue. Work-from-home policies, the “urban exodus,” and a host of other COVID-related phenomena will precipitate, at minimum, a slow crawl back to pre-pandemic ridership levels, perhaps even a permanent decrease in ridership altogether. The coming months, even years, are sure to host a cascade of crises.

The public transit crisis to come

The issues here are twofold. The TTC is the least subsidized transit system in Canada and the United States, overly relying on fares to fund its services. A fallout in fares could lead to catastrophe for the system— and of course for the people who rely on it. The emergency funding models (ostensibly) acknowledge this reality, but decreased ridership will also likely make the agency ripe for austerity measures, particularly from the Conservative provincial government who will undoubtedly looking for cost-saving measures following the sharp increase in provincial expenditures during the pandemic.

In the interim, concerns continue to swirl around cancellations of bus routes and stops, as well as the expansion of privatized “microtransit” options which involve using rideshare providers like Uber to replace less-popular routes.

While the phrase “build back better” has been tossed around loosely by Prime Minister Justin Trudeau and U.S. President Joe Biden alike, the idea that the pandemic has created an opening to improve our systems is a legitimate one. Returning to the untenable “normal” for the TTC— characterized by crowded buses, fare increases, and the constant fear of looming cuts— is an unsatisfying answer to the questions the pandemic has posed.

The alternative, of course, is actually building back better, implementing changes that will place Toronto front-and-center in fighting the twin crises of inequality and climate change— the urgency of which is ever-growing.

Schisms in the system

The present situation amplifies the system’s myriad existing issues. In many of the city’s “inner” suburbs, for example— like Scarborough or Etobicoke— public transit coverage is weak and patchy. This stems from decades of underfunding and uneven development— largely focused on the denser downtown areas. But as Herman Rosenfeld notes, new projects in the inner suburbs have begun unfolding which have in turn driven bitter fights about their character. The inner suburbs, of course, are exactly where comprehensive transit is badly needed: long distances between work, home, and amenities is typical of suburban communities, making walking or biking less viable options than they are downtown. And for those that can’t afford the most efficient (and mostly environmentally costly) alternative— a car— the bus is central to one’s livelihood.

Bad transit has a disproportionate impact on low-income and racialized communities, who spend hours navigating the system to complete basic daily trips. And yet the solutions offered to the inner suburbs miss the mark. It is in the inner suburbs, for example, where microtransit projects have been proposed.

Replacing “underperforming” bus lines with rideshare services addresses a problem rooted in austerity and underfunding, but offers the wrong answer: privatization. These projects will not only hand public money to private companies like Uber, but actively damage the environment through the expansion of private car usage and undermine the transit system we already have.

Transportation is now the dominant contributor to climate change. Some will argue that the proliferation of electric cars is promising, and that electric Uber fleets can answer our woes. But the environmental and labour costs of mining for lithium are severe, and the possibility of a mass-transition among consumers to electric cars, which is expensive, is a pipe dream. Expanding private car usage through rideshare services also fails to answer the basic need for equitable access as prices waver and surge in unpredictable ways. Alternatives must be rooted in access and environmental sustainability, which means transcending the present system— not adapting to it with different tools.

An important aspect of the TTC to consider is fares, which have become steeper— and fare enforcement, which has become more severe. In lieu of generous public funding, the system’s dependence on fares means it acts more and more like a private business than a public service— and in turn, fares climb ever-upwards: in 2006, they were $2.10; in 2021, $3.25.

The reliance on fares has also driven TTC to drastically expand their use of fare inspectors to crack down on “evasion,” resulting in marked increases in profiling, over-policing, and even violence against riders, many of them low-income and racialized. It is the poor, after all, that benefit the most from public transit— yet are simultaneously denied access to it through rising fares. As activist group TTCRiders points out, riders can be fined up to $425. Fines are “nearly triple the […] amount in Vancouver and Ottawa.”

While fare inspection was briefly suspended during the pandemic, it returned midway through the summer, a situation that has undoubtedly resulted in essential workers who rely on the system, many of them low-paid, being policed and punished. A smattering of organizations, though, particularly TTCRiders, fought back against the reintroduction of fare inspectors. Their return also occurred against the massive Black Lives Matter protests globally this past summer and the growing demand to defund and abolish police. Worldwide, the tide of public opinion has shifted away from policing and towards increased access and funding for social programs.

There are, of course, alternatives to our fledgling transit system that don’t involve higher fares, the private sector, or electric vehicles— and have the added benefit of fighting inequality and climate change.

Making transit free is an obvious solution, one which cities worldwide are starting to embrace. Going fare-free can transform city life for the better, eliminating the need for fare inspectors, breaking down financial barriers to access, and establishing mass transit as a legitimate alternative to driving or rideshares. In turn, this will reduce the amount of private cars on the road and therefore transportation emissions— a key element of fighting climate change.

Winning people over from private cars to public transit will also require massively expanding the system’s scope. Rapid transit should be available all over the city— including the inner suburbs— and seamlessly weave Torontonians, no matter their location, into the fabric of access. Taking away the financial burden is not enough; the system has to flourish.

This inevitably means pouring more public money into the TTC and changing the “market-driven approach” to transit development taken by the crown corporation Metrolinx.  The dispossession of the system by consecutive federal and provincial governments has meant compounding austerity, worse service and enhanced privatization. Correcting this course means reversing the decades-long arc away from full, permanent funding and toward fare reliance. As TTCRiders have said in their fight against fare inspectors, “The real TTC fare evaders are Premier Ford and Prime Minister Trudeau, who have not yet committed to permanent transit operating funding.”

But implementing an ambitious transit agenda is not a simple matter of electing the right politicians with the right policies. It will require broader political currents that take on capitalism directly. As James Wilt writes in his book Do Androids Dream of Electric Cars? Public Transit in the Age of Google, Uber, and Elon Musk: “We have to confront the extreme wealth that holds our governments hostage and deprives transit systems of the funds they need for a rapid escalation in service, access, and affordability.”

Transforming transit for the better means pursuing a programme of decommodification, taking all elements of market logic— ridesharing, fares— out of the system. That means fighting, as Wilt says, society’s real movers and shakers: the rich and the governments that enable them.

Proper public transit could be funded by wealth taxes and cracking down on the offshore accounts of the rich. But we can also reorient our priorities and reallocate the money that already exists in the public coffers. As Wilt writes, we can fund a transit revolution by draining the public organizations that actively make life worse for human beings: for example, “the military and carceral institutions that destroy the lives of people in low-income communities in the Global North and entire countries in the Global South.” This, of course, also includes the police, which constitute a large part of Toronto’s municipal budget. In 2021, the budget is just over $1-billion.

Accomplishing this requires working class organization. Calls to tax the rich to or to have the province and federal government step in with permanent funding is all good, they have to be rooted in movements that are organized on the ground. The labour movement and groups like TTCRiders have the potential to build the broad-based movement that is needed to fight for a public transit for the future.

The potential in crisis

With crisis comes political possibilities. Around the world, COVID-19 not only revealed cracks in the system but simultaneously brought about bigger, imaginative conversations about the world we want. Issues like student debt elimination and abolishing the police all went from fringe ideas to hotly-debated possibilities in many circles. Free and massively-expanded public transit, of course, has as well. And the idea of a robust and accessible public transit system  connects with the broader fights against racism, inequality and the climate crisis.

Given the scale of these issues, it is not enough to rest on the half-measures our leaders will undoubtedly come up with in the pursuit of “building back better.” In fact, it may not be enough to build back better, but rather to address these crises head-on and build back best: We’re running out of time.