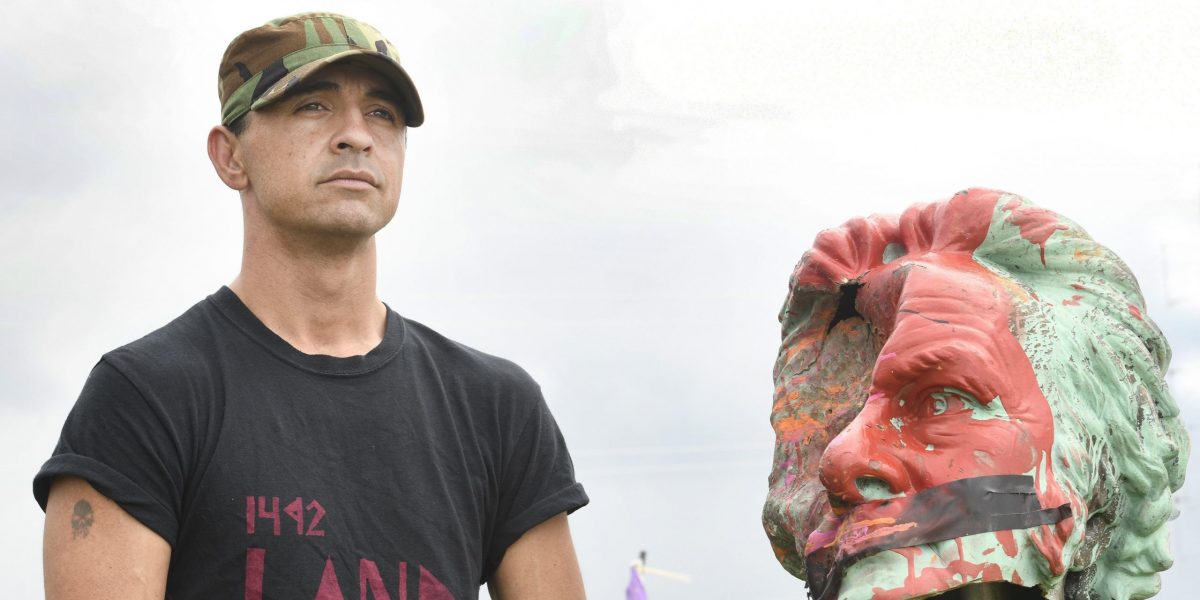 Last year, Six Nations land defenders stopped McKenzie Meadows from bulldozing through unceded Haudenosaunee territory to build a housing development project. The site was renamed 1492 Land Back Lane, signifying the beginnings of colonization against Indigenous peoples after Christopher Columbus travelled across the Atlantic Ocean from Spain to the Americas.

Spring Magazine spoke with Skyler Williams, a land defender from the Haudenosaunee Six Nations, Mohawk, Wolf Clan, and 1492 Land Back Lane, about Indigenous struggles and building solidarity and power.

Today, Canada occupies almost 99.8% of Indigenous lands, and with rising rates of poverty, youth suicide, and incarceration, the Land Back demand is more pressing than ever. Looking back at 1492 Land Back Lane now, what does the victory mean to Indigenous communities and all of Turtle Island, especially in confronting land theft and resource destruction projects?

Our wins don’t come very often in courtrooms or in the legislature. Our successes generally arrive on the Land, streets, and the bush. For us to have this particular victory was an incremental win. It’s a small step in the right direction; these things are a generational struggle. What my parents did and their grandparents to make sure that we still have an argument today. We are by no means of the assumption that Canada will correct itself. These incremental wins are essential to celebrate and reflect on the sacrifices made, especially the women who led the way and push to ensure that we conduct the struggle with integrity.

Justin Trudeau said, “there’s nothing more important than Canada’s relationship with Indigenous people.” In the last five years, this has only meant men with guns on their hips and badges on their chest dictating to us whose Land is whose.

Trudeau’s statement five years ago has meant negotiations at the barrel of a gun. Our people have never wanted any of this to become this way. And certainly, having 50 or more people from Land Back Lane arrested only to withdraw their charges is an absolutely ridiculous sentiment. How are we going into 2022 and still having the same conversation? In the shadow of Truth and Reconciliation and in the shadow of the UN Declaration on Rights of Indigenous people, and in light of those unmarked graves, for us, it’s not the time for happy Indian rhetoric.

And what of Justin Trudeau’s promise to build a nation-to-nation relationship?

The idea of the nation-to-nation relationship is a liberal mantra that worked quite well to get Indigenous people to vote. When Trudeau ran the first time, we saw that our people came out to vote more than ever on this promise of reconciliation. So to be there five years later and still staring down the barrel of a gun and still feeling those handcuffs on wrists. Every square inch our people live on today was paid for with blood, sweat, and tears. Our wins don’t come very often in courtrooms or in the legislature. Our successes generally arrive on the Land, streets, and the bush.

Whenever we assert our collective rights to the Canadian state, our sovereignty seems to get lost in the public debate. Sovereignty means we were here for thousands of years before colonization, and any legitimate claim to reconciliation must account for that question of our relationship to the Land.

Settler-colonialism and capitalism are interrelated organizing principles for Canada, and the ruling class has always used tactics like racism to divide us. We saw significant support from organized labour and rank-and-file workers at 1492 Landback lane. What did that solidarity mean for the land defenders in 1492?

The support of workers was absolutely vital. In Southwestern Ontario, Indigenous peoples are isolated. When the help came to us from workers and unions across the province, it also signaled to Canada the amount of support our people have. It helped to build countervailing power against Canada’s violence. To see that level of engagement from labour and certainly during these pandemic times was such a gift. I wish I could point to one union—across the board, we had so much support and love and solidarity. That type of support actually speaks to what a real nation-to-nation relationship looks like because we are building a united front based on respect for our sovereignty and self-determination.

This year, we saw an international outcry as the mass graves of Indigenous children were discovered. How was the use of residential schools by the Canadian state attached to the ongoing genocide that Indigenous people endure today?

First, the RCMP has plenty of indigenous blood on its hand. For them to be acting on these injunctions and court orders, there is a solid tie or resemblance to the era of residential schools when the RCMP cleared us off our lands and stole our children.

We witnessed the discovery of mass graves through ground-penetrating technology at the sites of former residential schools. These discoveries were nothing new for Indigenous peoples across these lands who have known about these mass graves. Those schools were part of that dispossession of [our] lands [so that the] next generation is colonized and taking part in that system meant to dispossess us. The resilience of Indigenous people is witnessed across all of Turtle Island.

You have also been active in the public demands for encampment support.

In terms of encampment support, we are talking about nearly half of the indigenous people in encampments. They are directly the product of residential schools—second or third generation. The trauma they are going through is beyond parallel. So for us to stand beside those brothers and sisters stolen from communities is an absolute necessity. How is it that we can offer this idea of Land back without inviting those brothers and sisters stolen from our homes without having some land to give them?

In Six Nations, land is scarce to come by. We are a community of 20,000 people, so we want to say that they can come home to a thriving nation. We want the same ability that every other town and big city has grown exponentially over the last 200 years. The only places in these countries that have got smaller are the reserves.

You were part of a Haudenosaunee delegation of land defenders that went up to Coyote Camp on Wet’suwet’en land with a letter of support and unity this fall. On November 18-19, 2021, the RCMP, armed with semi-automatic weapons and attack dogs, invaded Wet’suwet’en land for the third time in three years. Canada’s armed wing violently raided unceded Gidimt’en territory (November 18-19, 2021), removing Indigenous people from their Land at gunpoint on behalf of TC Energy’s proposed Coastal GasLink pipeline. You were amongst those arrested.

When we’re talking about Wet’suwet’en, we’re talking about a common thread: big banks, resource extractors, utilizing the courts and the police with injunctions in particular. Injunctions are a strong arm, a tool to continue this centuries-old song and dance of land dispossession and destruction. Canadian police continue to arrest Indigenous land defenders blocking the construction of Coastal GasLink, a 400-mile pipeline that would carry natural gas through Wet’suwet’en Land. We have witnessed violent raids on Coyote Camp and elsewhere that ended a 56-day blockade of a drilling site.

In 2010, 13 proposed pipeline projects went through Wet’suwet’en territory. Investors were forced to pull out of these projects because of the resistance by land defenders. The CGL pipeline is the only one left. Coastal Gas Link is owned by TC Energy and partly owned by IMCO, an Alberta-based investment firm that holds RCMP retirement funds and KPR, a private equity firm in the US. We know that these companies are now engaging in retaining the personal use of the RCMP.

Though the government states its commitment to reconciliation, it chooses to take direction from a private resource extraction company instead of negotiating directly with the Wet’suwet’en regarding Indigenous sovereignty.