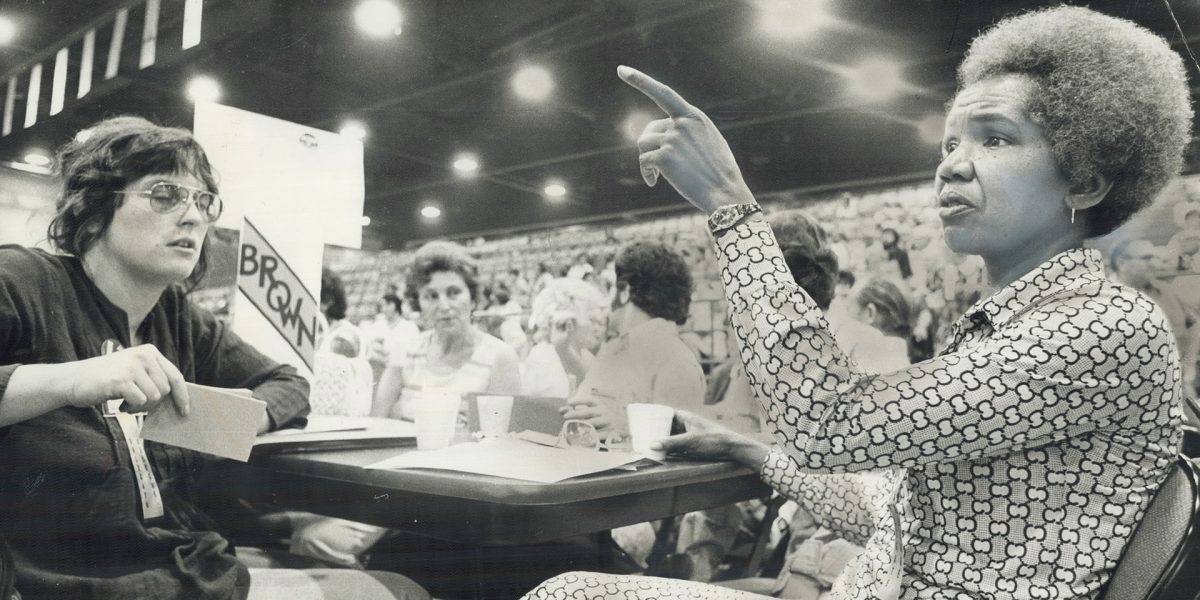 In 1975 Rosemary Brown ran for the federal NDP leadership under the slogan “Brown is beautiful”. She was the first Black woman to be elected to a provincial legislature was the first woman to run for leadership of a major federal party. She ran on a leftwing platform and narrowly lost to Ed Broadbent.

Sisters and brothers, I am here today to ask you a very important favour. I am here to ask you to select me to be the new leader of our party. A party whose tradition we love and in whose future we trust.

Since its inception in 1932 in Saskatchewan, a party that in the workplaces of Canada has built and fought for and always tried to see that whatever government there was in this country addressed itself to meeting the needs of the people of this country.

And today, I want to tell you, or to share with you, the ways in which I think we should continue to carry on in the great traditions started by J.S. Woodsworth, Agnes Macphail and carried on by Coldwell, Douglas and Lewis and all those others and all those others whose names are not even remembered among us.

The objective and goal of this party must continue to be to achieve human dignity for all people, not just in this land but in all others. We must start from an economic base and use that economic base to ensure the achievement of our goals. We must begin by putting an end to the profit system. The profit system, not just in our economy, but specifically in energy, in energy without which this world would cease to function.

It is ridiculous. Certainly you would agree it is ridiculous, that as a country we export cheap oil and gas to other countries while we continue to throw our taxes to make massive welfare payments to Syncrude and conglomerates of that sort.

This convention has agreed and now it is up to us to persuade the people of Canada that the necessary basis for a rational energy policy is a publicly owned, a publicly owned petroleum industry. In fact the job has already begun because a Gallup poll taken in 1973, two years ago, showed that already the Canadian people were coming to that decision themselves.

But let us not kid ourselves and think that public ownership in itself is a panacea. Government companies, such as that great government company the Alberta Energy Panarctic Oils, are no different from the private multinational corporations in the treatment of their workers. No different in their exploitation of the environment or in its blatant disregard for the rights of Native Peoples.

In fact, if we were going to tell the truth we would say that that company exists merely to funnel subsidies to the multinational corporation that rules and controls it. What we must have is responsible ownership based on a whole new set of assumptions about workers and conservation. Surely we’ve learned something from the CPR, that great monster that has sucked this country dry since the day it promised to link us from coast-to-coast at a price that is now only beginning to be realized by us.

Surely we have learned something from the CNR, our own CNR. And the lesson is there, that state ownership without the introduction of a whole new set of assumptions changes nothing. When we as a party speak of ownership, we must also speak of worker control. We must also incorporate in it the concept of socialist planning.

Integral to this goal however, must be the principle of decentralization of decision making and of regional autonomy. Where there are people who decide for themselves that they want self-sufficiency we must be prepared to accept this. We must strive to reverse the trend that pushes people off the land and forces them into these new heartless stone and steel cities that the private sector keeps building across this country.

We must nourish our life line, those little communities along the branch lines that our dear honourable beloved Otto Lang tells us that are inefficient and too expensive to be permitted to exist. We must fight Otto Lang, he cannot make those decisions for us.

And we must come to understand that equality does not necessarily mean homogenization. That there are some groups in our population, in the far-north for example, who may prefer a very different style of life and will accept a life that to some of us might seem even hard and unsatisfactory. But they must be given the right to make decisions about their own destinies.

Let us hope and let us pray that their decision includes their continuation within a framework of a strong and united Canada. But let us also accept that no argument, no force, however powerful can hold a country together that is not bound by a sense of common purpose and common interest.

But a word of warning, if we are to grow strong within ourselves let it not be at the expense of the rest of the world. It must not be at the expense of other nations and other peoples less fortunate than ourselves. We have been too long entangled in the political and economic web of the United States’ imperialism. And partly because of our own shameful colonial relationship to that country and partly because in some small sense we have tried to imitate them and become colonizers ourselves and imperialists. As socialists we must say that we will not continue to grow and strengthen ourselves at the expense of small and defenceless countries.

In closing may I say as my time is running out, to the one million children in this country who are starving; to the workers in this country who share dignity and pride because they know we grow and are strong because of their labour; to the women of this country through whose strength and support and encouragement I have had the guts to stand before you today; and to all of you I say, if elected leader I will be unbending in my stand against any form of oppression that crushes people and prevents them from realizing the fulfillment of their life. And that as leader of this New Democratic Party I will be answerable to the members of this party as we go forward to become the government which will be the instrument through which a truly human society is built here in this land.