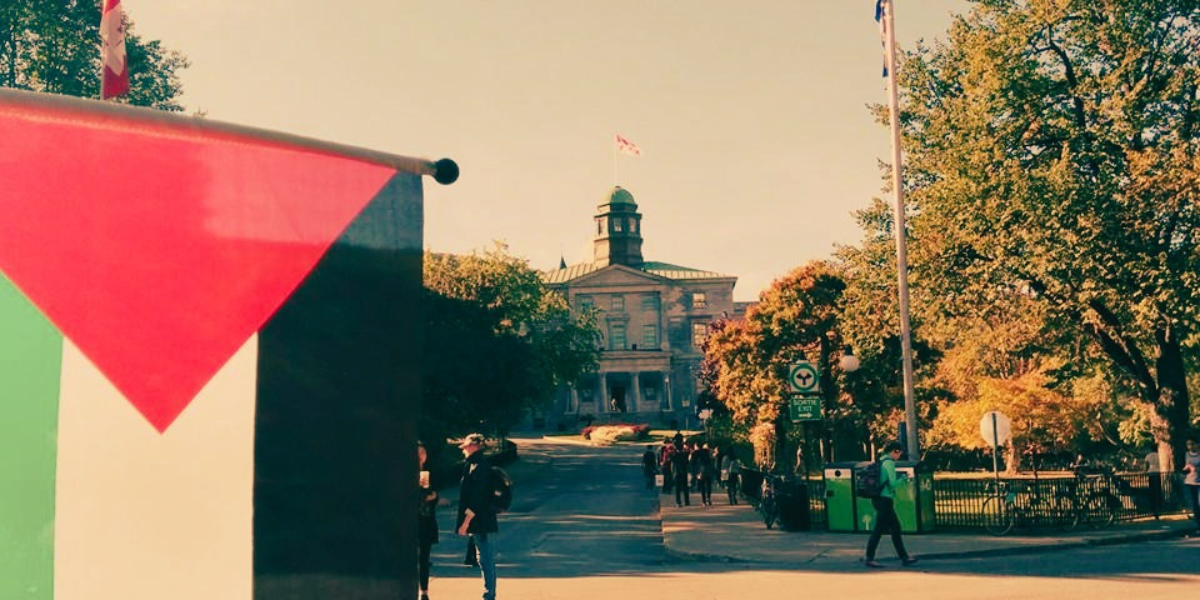 The apartheid lobby group is angry that undergraduate students were asked to vote in March on whether they supported Palestinian rights. Their press release openly states their objective is to deter student democracy across the country. “These types of referendums are not restricted to McGill, this is a problem in universities across Canada, and we hope other universities are paying attention,” said Sam Goldstein, B’nai Brith’s Director of Legal Affairs.

B’nai Brith has been campaigning aggressively to defund student unions and associated organizations. In 2019 B’nai Brith created a coalition of anti-Palestinian groups that called on Ontario students to take up “a unique opportunity to deny funding” to student associations. They pressed the University of Toronto’s administration to withhold its graduate students’ union funding. B’nai Brith was also granted intervener status on the side of the Doug Ford Conservatives in a court case between the Canadian Federation of Students/York Federation of Students and Ontario regarding the government’s move to force universities to grant opt outs for various student fees.

The immediate background to the announced lawsuit is 71% of McGill undergraduate students voted for a resolution that commits SSMU to take a stand against Israel’s system of racial discrimination. The resolution called for a host of measures including SSMU divesting from and boycotting “corporations and institutions complicit in settler-colonial apartheid against Palestinians.” In response B’nai Brith released a statement labeling “SSMU’s behaviour …antisemitic”. It “called on McGill University to immediately cease funding SSMU until it rescinds this bogus referendum result.”

The administration responded by threatening to terminate its Memorandum of Agreement with SSMU, which regulates fees, use of name and other matters between the university and student union. The administration claimed the Palestine Solidarity Policy encourages “a culture of ostracization and disrespect due to students’ identity, religious or political beliefs.” But the resolution does not mention any ethnicity or religion.

The event elicited a strong response from the apartheid lobby. Centre for Israel and Jewish Affairs, B’nai Brith, Honest Reporting Canada and Hasbara Fellowships Canada all published statements denouncing the event. Many other prominent Israel lobbyists denounced it on Twitter. “Roger Waters blasted for speaking at Montreal event tied to PFLP”, noted the headline of an Israel National News story. In their press release announcing their lawsuit, B’nai Brith attacked Waters for standing with McGill students. It noted, “Rock star Roger Waters recently spoke at a virtual SPHR McGill forum, where his usual anti-Israel venom found a welcome audience.”

In response to the suit against McGill students Waters published an open letter “On Human Rights, McGill University, Students, and Free Speech” in which he denounced B’nai B’rith’s bid to extinguish “the global Boycott Divestment and Sanctions movement for Palestinian rights.” The founder of Pink Floyd concludes, “all your huffing and puffing and baring of teeth signifies nothing, because your cause is morally bankrupt, your Emperor has no clothes.”

B’nai Brith’s recent suit is probably partly a response to the success of the Waters event. It’s odd to sue a university and student groups in the middle of summer for a vote that took place four months earlier.

On its face, the suit is ridiculous. Will B’nai Brith argue that university students don’t have the right to hold referendums on political questions?

SPHR and Palestinian students at McGill have a far stronger ground to sue the administration and student union. The discrimination they’ve faced has been overt.

By repeatedly conceding to B’nai Brith’s bullying, McGill’s administration has emboldened the apartheid lobby group to create a climate of intimidation regarding the discussion of Palestinian oppression.

B’nai Brith’s lawsuit is clearly an attempt to create “a culture of ostracization and disrespect due to students’ identity, religious or political beliefs.” The McGill administration must defend its pro-Palestinian, anti-apartheid students from B’nai Brith.