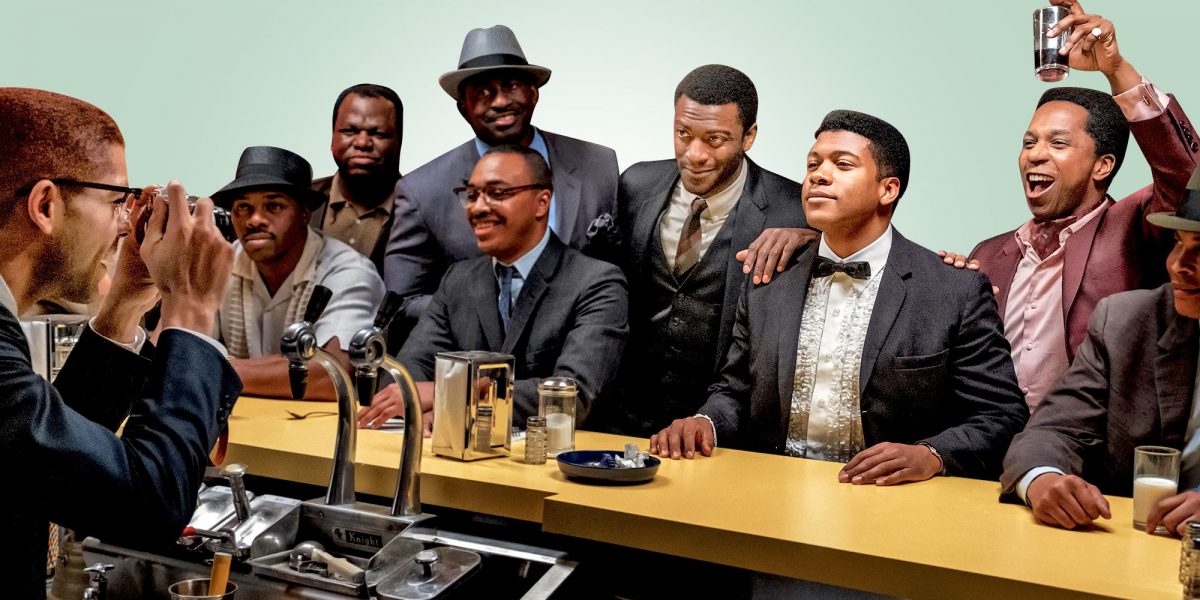 Malcolm X, Muhammed Ali, Sam Cooke and Jim Brown gather in the aftermath of Ali winning the Heavyweight title in early 1964, about to embark in an emotionally tense and politically charged evening of debate, argument, insults and love. In the midst of a growing radicalization in American society, and a Civil Rights movement splintering as African American activists debated how to destroy structures of white supremacy, it is this imagined meeting that Regina King’s directorial debut takes us to in One Night In Miami, a film set to score several Oscar nominations including Best Picture.

The film kicks off with each of the four protagonists being reminded of their powerlessness despite having achieved enormous success or notoriety. Ali, still Cassius Clay at this point and played by Eli Goree, has slurs fired at him as he fights in Wembley Stadium in London. Brown (Aldis Hodge) gets called the N-word by an old white Georgian patriarch who claims to love him as a football player but refuses to let him the house because of the colour of his skin. Cooke (Leslie Odom Jr) gets a cold reception performing at the Copacabana in New York because his music doesn’t conform to the kinds of music the white audience expects from Black performers. And Malcolm (Kingsley Ben-Adir) is realizing that his time with the Nation of Islam is coming to an end and he must figure out an exit strategy to continue his quickly evolving political project.

Ali defeats Sonny Liston to win the title in a gorgeously choreographed scene that both shows Ali’s boxing prowess but also the excitement that the three others experience seeing Ali triumph. Afterward, the four gather in Malcolm’s small motel room where he is unprepared to offer the drink and party Cooke and Brown had hoped for and instead hopes they can engage in sharp political discussions about the role that prominent Black celebrities need to be taking in the struggle against racism.

Throughout the night each reveals demons that lurk beyond the surface. Brown admits his fatigue of being a mere gladiator for the ruling class sitting in stadium boxes. Ali acknowledges that he considers himself a Muslim and aims to join the Nation of Islam. Cooke, after being called out by Malcolm in some of the most tense scenes of the film, recognizes that his music is not filled with a message that captures the pain African Americans want expressed by Black artists. Malcolm admits that he is about to leave the Nation of Islam and that he hoped that Ali would join him to start a new project.

Gorgeously filmed and filled with fantastic acting performances (especially from Odom Jr and Ben-Adir), One Night In Miami digs deep into the complex debates that prominent African American figures were grappling with in the mid-1960s. The four discuss whether efforts should be made to radicalize greater numbers in “a fight for our lives” (as Malcolm argues) or whether strategies of promoting Black businesses and Black Capitalism (Cooke espousing this view as he himself was building a music empire).

After the tension filled night comes to an end, the movie tracks to events over the next few months, where Malcolm leaves the Nation of Islam (without Ali, who turns his back on Malcolm), where Brown retires from football to pursue an acting career, and where Cooke finally performs the song Malcolm asked of him (the legendary A Change Is Gonna Come). Cooke and Malcolm would be dead within a year but their marks on the struggle for Black Liberation would continue to resonate.

One Night In Miami suffers a bit from remaining too true to its stage origins, but King manages to pull together incredibly strong performances that captures the heart and emotions that were running deep at the time. One of the most poignant aspects of the film was capturing Malcolm’s vulnerability, an image we rarely see. Malcolm would have been incredibly isolated during this time and still at the whim of the Nation of Islam, that controlled every asset he relied on. That he would struggle to emotionally persevere during this time is obvious, but this struggle is not often acknowledged. Being a radical or revolutionary can take a toll on those fighting for a better world and we are allowed to have moments of weakness. Ben-Adir’s portrayal allows us to empathize with this moment in Malcolm’s journey, not just the ones where he boldly stoked the fires of social change from the podium.

As a film, One Night In Miami is both a small and intimate portrait of these iconic figures and a powerful recollection of the messages they carried to broad audiences in hopes of building a world free from racial oppression. In the midst of the film, Ali explains his attraction to Black Power: “Power just means a world where we are safe to be ourselves. To look like we want. To think like we want. Without having to answer to anybody for it. Now after all we put in don’t black folks deserve that much.” That message continues to resonate today as we continue to fight against racial oppression and white supremacy. It’s that message that makes One Night In Miami an important film.