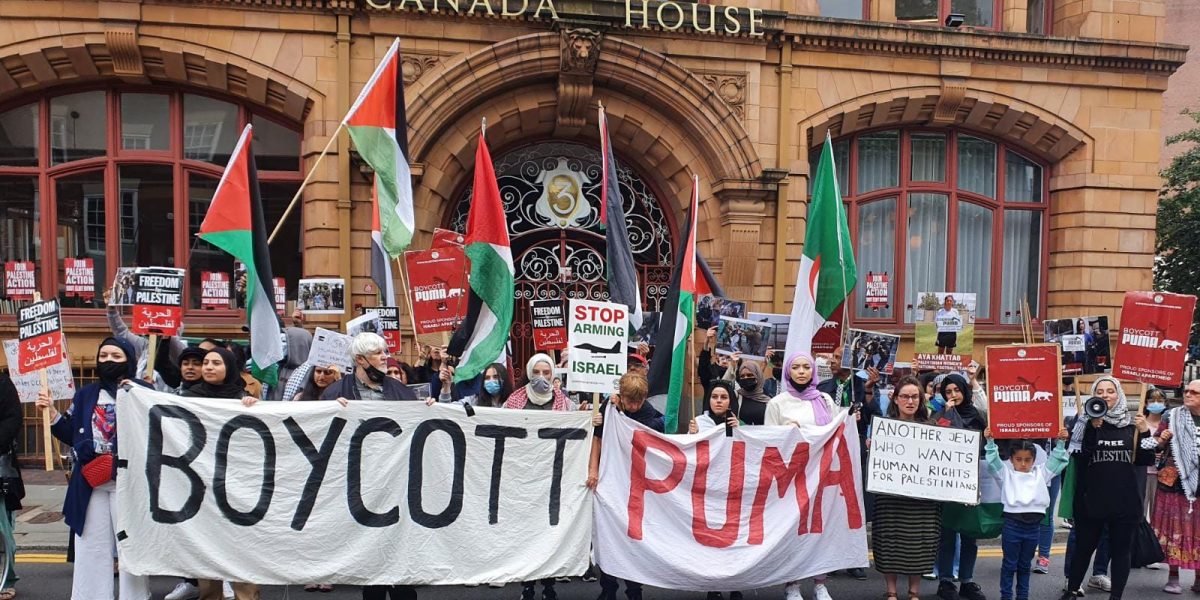 As the Boycott, Divestment, and Sanctions (BDS) movement reaches its 16th year, it remains the predominant global, non-violent, and Palestinian-led resistance to the Israeli Apartheid and the ethnic cleansing of Palestinians.

In 2005, a year after the International Court of Justice ruled the construction of Israel’s apartheid wall on occupied Palestinian territories illegal and 57 years after the beginning of the Nakba, the Palestinian Civil Society called on the international community to boycott, divest from, and place sanctions on Israel and all corporations, institutions, and associations complicit in upholding the Israeli apartheid and the forcible displacement of the Palestinian people.

Through a rights-based approach rooted in non-violence and inspired by the South African Anti-Apartheid Movement, BDS puts forth three demands from the Israeli state. First, that it ends its occupation of Palestinian land and the Syrian Golan Heights, and dismantle the 440KM apartheid wall. Second, that the Israeli state recognizes and grants the right of Palestinian citizens of Israel, inside the 1948 occupied territories, to full equality in relation to their Israeli settler counterparts. Third, that the Israeli state respects, protects, and promotes the inalienable right of Palestinians in the diaspora to repatriation and restitution, as detailed in UN Resolution 194.

BDS consists of a three-pronged strategy of boycott, divestment, and sanctions. Boycott means withdrawing all financial support from international and Israeli corporations, institutions, and sporting, academic, and cultural associations engaged in the violation of Palestinian human rights and upholding Israeli apartheid.

Finally, sanction entails urging governments to place sanctions on the Israeli occupation state, by ending free trade and military trade agreements with Israel, and expelling Israel from international forums like the United Nations and FIFA.

BDS relies on targeted consumer boycotts to persuade retailers to stop selling products from Israeli and international companies complicit in the occupation of Palestinian land and violation of Palestinian human rights. The Palestinian BDS National Committee (BNC) therefore officially calls for and encourages a targeted boycott of a small number of companies.

Currently, the BNC calls for consumer boycotts of six targets. Consumers are encouraged to boycott all Israeli fruits and vegetables farmed on stolen Palestinian land until they are no longer sold, Hewlett Packard (HP), Ahava, Pillsbury, SodaStream, Sabra, and Puma.

HP maintains data centres through their servers for the Israeli Occupation Forces and provides Itanium servers for the Aviv System, which is the digital database of the Israeli Occupation State’s Population and Immigration Authority and facilitates institutionalized racial segregation and apartheid in occupied Palestine. The targeted HP boycott has urged 32 US churches to divest from HP and over 1.7 million people to sign a petition calling on HP to end all involvement in the Israeli occupation.

Pillsbury and Ahava cosmetics both operate in factories located in illegal Israeli settlements, SodaStream actively displaces indigenous Palestinians in the Naqab desert as it continues to build plants in “Israel proper,” and Sabra donates to the Israeli Occupation Forces.

Finally, Puma is the main sponsor of the Israel Football Association (IFA), which has seven clubs based in illegal settlements and operates on illegal settlements. Despite repeated condemnation by human rights groups, public figures, elected officials, and UN advisors, Puma and the IFA refuse to end their involvement in the Israeli occupation and its violation of international law.

The BNC’s ongoing divestment campaign targets AXA, the French multinational insurance corporation, which invests in Israeli banks and is listed in the UN’s database for corporations conducting business related to illegal settlements on occupied Palestinian land, despite being a signatory of the UN Global Compact. As of April 2021, AXA has divested at least $1M from Israeli banks and upwards of 12,000 people have signed a pledge to boycott AXA.

The BNC’s targeted boycott by no means claims to be an exhaustive list of all relevant corporations, institutions, and associations complicit in upholding Israeli occupation. Several BDS lists unaffiliated with the BNC document hundreds of Israeli and international academic, agricultural, athletic, cultural, scientific, medical, and tech organizations and companies supporting the Israeli Apartheid. In addition to the larger, official targeted boycott campaign, BNC recommends that smaller campaigns are organized based on local needs and conditions.

Similarly, local divestment and sanctions campaigns are encouraged. Just recently, a motion regarding the adoption of the Divest for Human Rights Policy was passed by McGill University’s Legislative Council. The motion calls on McGill University to divest from several international corporations implicated in the violation of human rights, including TC Energy Corporation, Lockheed Martin, Puma, Foot Locker, Nordstrom, Kohl’s, Re/Max, and OshKosh Corporation. Though the motion rightfully does not limit itself to corporations upholding Israeli occupation, its mentioning of Re/Max and OshKosh’s active involvement in the institutionalized violation of Palestinian human rights, the motion was perceived and treated as a “closeted BDS [motion]”, making its approval remarkable given this student union’s sordid history with BDS.

BDS is not the sole means of achieving Palestinian liberation from the river to the sea, but it is an essential strategy of popular resistance and international solidarity.

With the growing global approval of BDS, Israeli exceptionalism and the Israeli state’s evidently entrenched impunity are challenged within academic institutions like McGill University, labour unions, and governments worldwide.

Although this movement is rooted in a strategy that relies on jeopardizing political relations between the Israeli state and other countries, compelling the Israeli state into believing that Palestinians possess an inalienable right to self-determination, and ultimately raising the “cost” of the occupation, it effectively paves the way for radical, anti-capitalist, and abolitionist organizing. For that reason, omitting the increasing success of the movement and the broadening global attention it has brought to the struggle for Palestinian liberation on account of its shortcomings would be a lapse in judgment. BDS provides a crucial pillar to our struggle: building the foundation for worldwide mass mobilization.

Boycott, divestment, and sanction campaigns against Israeli and international corporations complicit in the ethnic cleansing, displacement, and institutionalized subjugation of Palestinians is not only a morally sound course of action, but is an increasingly pressing political necessity.

Palestinians, on the ground and in exile, cannot – and should not – sit idly by as the Israeli state enjoys utter impunity and exceptionalism, despite violating a myriad of international laws and UN charters. Grassroots-based, Palestinian-led mass mobilization is essential to our liberation, return, and restitution. BDS effectively builds an international movement committed to the struggle for universal human rights and Palestinian liberation.