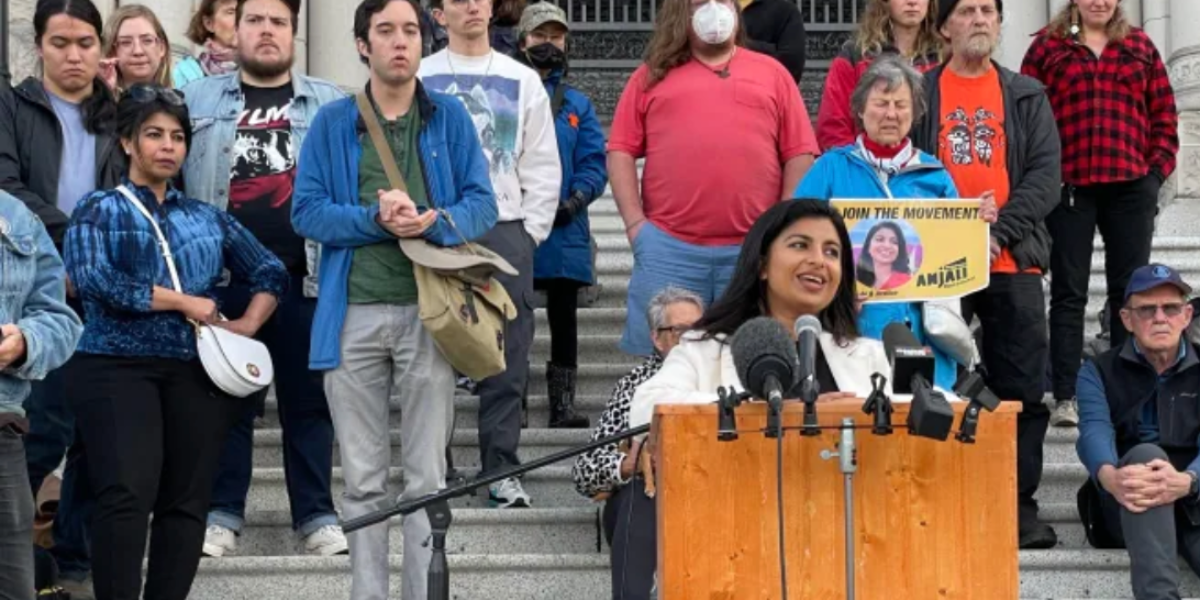 Amidst a worsening climate crisis, thousands flocked to BC NDP leadership candidate and climate activist Anjali Appadurai. The enthusiasm for her campaign reflected that many are both disappointed with the record of the NDP under Premier John Horgan, but still see it as a vehicle for change.

Instead of greeting this as an opportunity to improve the party and address the existential climate crisis, the leadership of the BC NDP saw Appadurai’s leadership campaign itself as the existential threat. They have signalled themselves as a party that would rather keep ties with fossil fuel capital than give hope to young activists.

Anjali Appadurai has signed up thousands of new NDP members as part of her leadership race. As her campaign site explains, “Anjali’s ability to connect the policy dots between the climate crisis and all our intersecting social crises gives her a special opportunity to bridge the historic divide within the BC NDP between labour and the environment.” With a dwindling membership since it was voted into office, one would think the BC NDP would celebrate this growth of new members and a reenergized base, but instead the party brass have engaged in a smear campaign.

The allegations brought forward are specious and hypocritical, at best. Outside of both vague and slanderous language that attempted to rally more against Appadurai as a person than as a candidate, the main accusation was a lack of transparency in a relationship with Dogwood BC, an environmentalist organization that is a third-party organization that campaigned to recruit members to join the NDP to vote for her.

The internal investigative report, authored by Elizabeth Cull, BC NDP Chief Electoral Officer as well as lobbyist representing northern mining and oil interests, goes on to detail that Alexandra Woodsworth, Dogwood Director of Membership, was also a volunteer for the Appadurai campaign, letting potential voters know that they can suspend membership from one party to temporarily join another.

This was no different than how the United Steelworkers behaved in their support for Eby. USW is one of the BC NDP’s top donors, they met with Eby and ran an aggressive campaign to sign people up for the NDP in support of Eby, who they thought was less of a threat and more supportive of industry. As one of their memos noted

“Even if the Enviro candidate loses, they can influence the party further by getting a high percentage of the vote. We want to drive it down by increasing Eby’s vote. Helping Eby gives us leverage with him after he’s elected. We are being strategic in voting for a candidate that isn’t going to advocate for the end industrial logging, and we need to sign up and elect David Eby in order to achieve that… We believe by electing Eby and reducing the percentage of the vote for the anti-logging candidate we can push back on the green agenda… Someone will be contacting you to remind you that it is time to go vote for David Eby.”

Newly joined members received countless calls and texts providing information on upcoming Eby campaign events, asking for their vote, while also being pressed for their past political records and stances.

Appadurai has been accused of a “hostile takeover” – as though a young racialized woman with a strong record as a climate activist and as a federal NDP candidate represents an outside threat. Cull’s report portrays the push for the NDP to stronger and more democratically represent collective interests as anything but. A request to appeal the report and recommendations was requested and rejected.

The report was used by the BC NDP to disqualify her from the leadership race–depriving NDP members of the democratic right to choose their leader. This was a coronation of David Eby by the party brass. The BC NDP leadership voted against even hearing Appadurai’s rebuttal to the accusations.

The strength of Appadurai’s campaign, and the hostility against it, is not because of any procedural mishap. As she explained, “”It was the politics of the campaign — not the process, personnel or tactics — that attracted the number of members that it did.” This smear campaign against Appadurai is also designed to distract from the BC NDP’s record on the climate and other issues, and to pave the way for this record to continue.

David Eby and the BC NDP record

David Eby was the assumed next-in-line to take on the leadership role from Horgan. He was largely the only one in the race when he announced his run in July of this year, with the vast majority of MLAs giving him their support.“Really I don’t see any radical shifts happening here for government,” Eby has stated. “People are happy with our government, they’re happy with the direction we’re going.”

Clearly, Eby isn’t listening. Numbers from the BC Coroners Service show that 169 people lost their lives to overdose in August 2022, bringing the total number for 2022 to nearly 1,500. The housing crisis, like the rest of the country, is only getting worse. As if to be part of some sort of leadership race, Eby announced a progressive housing plan in a way that came across as a campaign move and not just provincial activity. There is nothing listed on his platform website outside of current policies regarding climate, though he has gone on to release some mentions in media that climate is not his priority over housing and other infrastructure, noting a failure to acknowledge how intertwined these crises are.

Regardless of any positive reforms Eby might propose, they are all tainted with the dishonest and telling nature of his party’s actions. Eby himself, while making claims to be at arm’s-length from the CEO’s report, was instrumental in registering 2 formal complaints against the Appadurai campaign, as well as providing transcript and recordings to serve as ‘evidence.’ In the report itself, Eby’s campaign provided two complaints on Sept 15th and Oct 4th, providing summary information on Oct 7th.

While Eby can try to maintain his innocence in squashing a new hopeful in the leadership race, he did anything but. By bureaucratically quashing Appadurai’s campaign the BC NDP leadership sided with big business over democracy. It has put the interests of oil and gas lobbyists ahead of party members and the province. There is little doubt the party will be tainted by this self-imposed scandal for years to come.

While bureaucratic maneuvers might work inside the party, they won’t stop the climate justice movement outside the party. But the ouster of Appadurai shows the movement will need to keep building and apply more pressure to the NDP government to push it towards climate action.