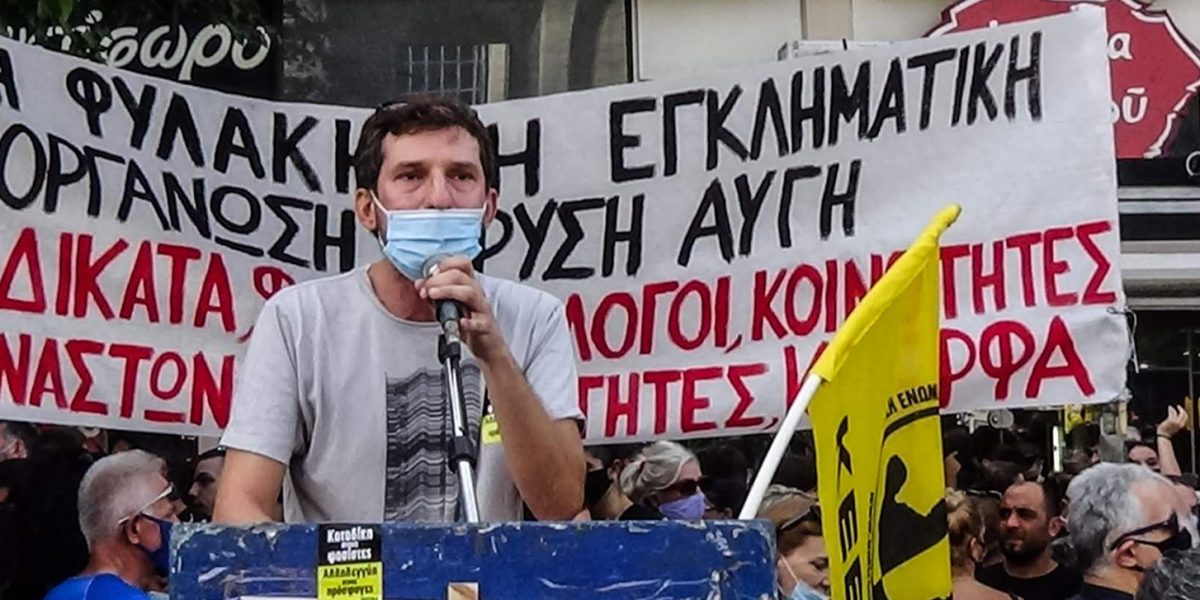 Spring Magazine spoke with Kostas Katarachias, a doctor who is president of the workers union in  a cancer hospital in Athens, Greece. Kostas is also a member of the council of hospital doctors in Athens, a member of the Socialist Workers Party (SEK) and KEERFA (United Movement Against Racism and the Fascist Threat).

You and others in Greece are celebrating a big court victory right now, can you explain what happened?

The 7th of October was a historical day for the anti-fascist movement in Greece and worldwide. The decision of the Supreme Court to condemn the neo-Nazi party of Golden Dawn as a criminal organisation and its leadership as a group of criminals who organized murderer attacks against immigrants, leftists, unionists and LGBTQI people, is a great victory for the working class, the youth, the anti-fascists and anti-racists, the immigrants and of course the victims.

Tens of thousands of labour unionists, students, as well as the entire spectrum of the left, gathered outside of the Supreme Court demanding jail for the neo-Nazi scum. Upon hearing the verdict, the thousands-strong crowd burst into clapping, slogans and songs. The militancy of the protesters was so adamant that even after the police tried to disperse the crowd by bombarding them with tear gas and flashbang grenades, the demonstrators stayed on the street and marched to the center of Athens.

It was a very difficult struggle because Golden Dawn has been a parliamentary party with protection from the Police, the courts and the entire system for a number of years. The murder of antifascist rapper Pavlos Fyssas by a Golden Dawn member scum in September of 2013 was the turning point in this dynamic and led to an outburst of anti-fascist protests all over the country, with demos taking place every day and thousands of people demanding the imprisonment of the neo-Nazi scum. This movement peaked with the general strike a week after the murder and with the clashes of thousands of people near Golden Dawn headquarters.

Under this pressure, the coalition government of the Conservatives and Social Democrats initiated the arrest of all of the Golden Dawn leadership and led them to trial in April 2015.

That development was a vindication for the revolutionary and the anti-capitalist left. Our party SEK contributed decisively with KEERFA which, in turn, launched the trial campaign, and ensured the presence of civil action in the legal proceedings and called for unity of the Left in this battle. It was the first trial of Nazis after the Nuremberg trial and the first time in Greece that neo-Nazis were condemned as criminals.

What was Golden Dawn? How did they rise to such prominence and danger?

Golden dawn is a neo-Nazi party which was created in the early 90’s as a group of military battalions trying to terrorize mainly leftists and migrants. There were several attacks including on members of SEK, high school student activists, and in the late 90’s they beat a student almost to death. Although they were a marginal group, the courts only jailed the Nazi scum who was recognized. Golden Dawn was protected by the dirty institutions of the system.

During and before the crisis, the Troika (International Monetary Fund, the European Central Bank, and the European Union) implemented austerity policies, and harsh racist politics grew in this climate. This political environment created the space for Golden Dawn to rise and elect MPs to the parliament, reaching a percentage of 7% in 2012. They had funding, publicity (the mass media advertising them) and legalization from the system. But at the same time the radicalization of the working class with general strikes provoked a left turn with left party Syriza going from 3% of the votes to 27%, thus becoming the second biggest party in Greece. Syriza formed government in 2015. So we prioritised creating a united front against Golden Dawn with the pioneer activism of KEERFA believing that we can smash them.

What was the history of resistance to Golden Dawn in Greece? How was their rise stopped?

We campaigned in the period after 2012 trying to convince all those leftists who were shocked by their election success, that Nazis were not strong enough to confront the anti-fascist movement. The 7% has no connection whatsoever with the Nazi core. This core was remaining a marginal group and every day actions on our side proved they had no legitimacy in the society, our unions and the workplaces. So we didn’t stop organizing demos despite their continuous assaults, thus preventing them from establishing themselves in workplaces.

For example, we stopped them when they were trying to gain access to hospitals by donating “blood for Greeks only.” KEERFA organized a big rally and music concert in Syntagma Square in front of the parliament in January 2013 named Athens: City of the Anti-Fascists. In march 2013, a new massive demo took place in response to the murder of a Pakistani immigrant Sahzat Luqman. So the movement was ready after the murder of Pavlos Fussas to escalate the fight against them.

If you could give activists elsewhere some advice on how to fight the right, what would it be?

There must be no complacency. We are confident that the majority want to stop the rise of the far right. This can be achieved with activist actions against their presence everywhere. The key issue to stop them is the working class and the unions and the common front with all the left in every initiative. Open and mass initiatives against racism, Islamophobia and the far right. Campaigning that neo-Nazis must be illegal and refugees welcome. Supporting the strikes and the battle against austerity for a socialist way out of the barbarism of systemic crises. Building the alternative to capitalism is the worthiest investment this period.

What effect will this have on the political terrain in Greece? How will it affect your groups and others on the left?

This period we have a Conservative government attacking our rights, the left, our jobs, escalating the warfare politics with Turkey, pushing refugees back in the Aegean Sea and harshening racist politics by imprisoning refugees in inhuman camps. They protected Golden Dawn the previous period and still have connections with far right groups. This government continues the cuts in public healthcare spending and shamelessly leaves workers and the elderly with no protection from the spread of the pandemic, while the second wave is becoming a great threat.

Our struggle against the Conservative government is now boosted towards escalating strikes after the victory of jailing Golden Dawn. A week after the historical decision, on October 15 we had a big general strike of the public sector to save our public hospitals. Thousands of workers demonstrated against the government. Now there is a growing number of working class people believing that we can get rid of them too, and seeking the alternative not in another Syriza government but in the anti-capitalist left and working class power.