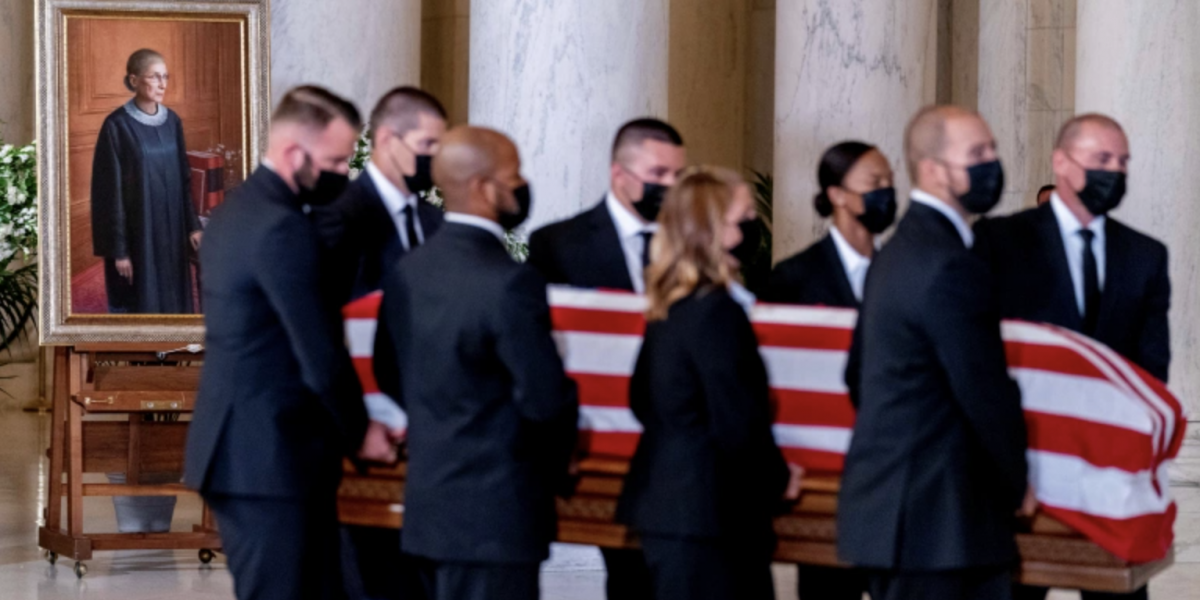 Few judges garnered as much admiration as Supreme Court Justice Ruth Bader Ginsberg, the feminist icon who became a symbol of resistance to a growing conservative judiciary in the United States. While in law school, even in Canada, my fellow students and professors alike held her in high esteem, dressed as her for Halloween, wore t-shirts with her likeness and her now famous moniker, “RBG”. Her death last Friday has been a stab in the heart to law students, lawyers, and progressives who saw her as a bulwark against an impending reaction, now certain to be replaced by a reactionary ghoul even if Donald Trump loses his re-election in November.

The Contradictions of RBG

Ginsburg was the second woman named to the Supreme Court of the United States and became a symbol of the struggles women faced entering and participating in the legal profession at a time when it was the exclusive domain of rich white men. She entered law school after having children, having to continue home responsibilities while her husband began his own law practice, even switching schools when her husband’s work required the family to move to New York.

She came to national prominence as general counsel for the American Civil Liberties Union Women’s Rights Project, arguing several gender discrimination cases before the Supreme Court. This included helping to persuade the Court to extend the Equal Protection Clause of the Fourteenth Amendment to women.

Ginsburg was appointed to US Court of Appeals in 1980 and then the Supreme Court in 1993, Bill Clinton’s first pick to the highest court. Throughout her tenure there, she was part of the liberal minority and wrote important dissenting positions, but also the occasional majority decision that positively impacted women and persons with disabilities (Olmstead v. LC). Her most famous dissents included the infamous election theft case Bush v Gore, and a reactionary equal pay case in Ledbetter v Goodyear Tire. And most famously in Shelby County, where the conservative majority invalidated key sections of the Voting Rights Act that had granted the federal government authority to intervene in jurisdictions that had histories of discriminatory practices.

However, her record isn’t as clean as many of her supporters wish it were. Compared to other liberal Justices, like Sonia Sotomayor, her record comes with lot more concerns the Left should be honest about. She notoriously voted with the conservative majority in a tough on crime sentencing case and for allowing a pipeline to pass underneath the Appalachian Trail despite huge protests from the Indigenous population living where the pipeline is set to be constructed. Combined with her horrible record at hiring African American clerks (one in 25 years on the bench) and her troubling criticism of Colin Kaepernick’s protest against police brutality (a position she did walk back), it’s clear that RBG carried a lot of “white feminism” baggage around issues of racial and economic justice.

Despite her contradictions though, her death is devastating for many who rightfully saw her as a pioneer for women in the legal profession, who devoted her life to important progressive causes. If Trump appoints her replacement, it will certainly be someone who will advance a jurisprudence antithetical to many of the things RBG advocated for in her decisions and her dissents. All this will happen in the context of a final six weeks of an election campaign and with Democratic nominee Joe Biden unlikely to offer a counter to a sixth conservative judge, such as packing the Court in retaliation. The political consequences of RBG’s death are horrible and there is no way to sugar coat it.

But the position we are in, sadly, is partly the result of progressives more than ever looking toward litigation and the judicial system to advance social change and good policy. Where once social struggle and class warfare were seen as engines of change, lawyers and legal briefs have replaced these both in the United States and also in Canada.

One of the reasons RBG became a standard bearer for so many aspirations and hopes is because she was seen as on our side and our advocate on the top court. When important litigation was working its way up the American judiciary, folks knew that win or lose she would be an important voice defending our issues. The idea that only mass social unrest and flexing the power of labour or movements is what shifted the political culture and shaped judicial opinions became yesterday’s approach. The key now was making sure good people got onto the Supreme Court and that would assure the progress of history or the defence of past gains.

This has been especially the case in Canada, where the labour movement has largely shirked the idea of mass struggle to oppose draconian social policies or to advance important rights. A series of Supreme Court decisions in Canada related to the constitutional right to collective bargaining and the right to strike have been important victories that provide ammunition for struggle. But for many trade unions they have become excuses for not mobilizing members around important issues.

If governments introduce legislation that infringes collective bargaining rights or forces workers back to work, the first instinct has more often than not been to file a court challenge to the law in hopes that several years in the future some judge will agree and award some sort of compensation for a governments unconstitutional behaviour. Most telling in Ontario in the time of COVID is how the teachers’ unions have chosen a litigation route in response to the potentially unsafe work conditions as schools reopen, rather than mobilize work stoppages and refusals to push the government to change its position.

In Canada we have our own adoration societies of former Chief Justice Beverly McLachlin and current Justice Rosie Abela. Similar to RBG, the infatuation is largely based on a sense of powerlessness of changing laws by mass mobilization and instead hoping that progressive jurists can save the day. But hinging all our hopes on a few unelected judges is an incredibly risky strategy, always hoping they don’t die or retire when the “wrong” party is in office to appoint the successor. Progressives in the United States are now facing the prospect of a liberal justice being replaced by a right wing monster because of this gamble.

Even radical lawyers can easily fall into the litigation approach to social change, but this is not an approach that socialists should embrace. For us, social transformation and the fight for reforms (or defense of past victories) are best assured through the power of working class mobilization. The right to strike and collective bargaining is only meaningful if the power associated with those rights is exercised. In turn, those rights are best defended if working class organizations are willing to and able to exercise the power associated with strikes and collective bargaining. Litigation is at best a complementary activity but never equal in terms of achieving the societal change we truly need.

While I understand the admiration that many in my profession hold for the likes of RBG, this kind of hagiography is not that useful in bringing to fruition the kind of society many of RBG’s supporters want to see. It’s time to go beyond Supreme Court justice worship and to focus on the immense possibility that only workers power can give us.