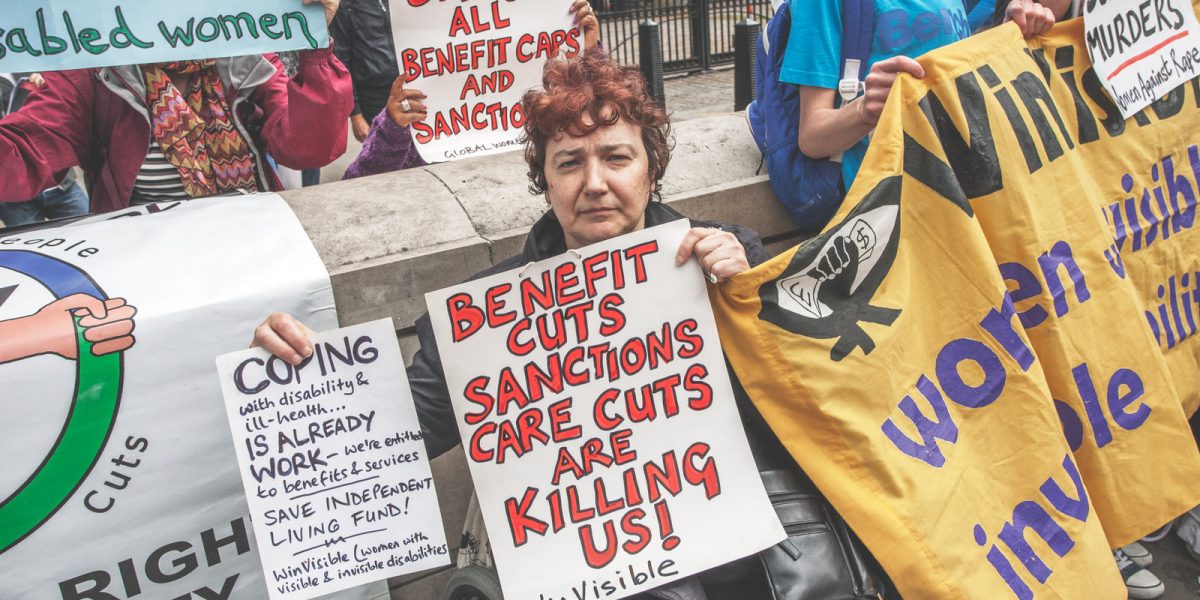 The War on Disabled People: Capitalism, Welfare and the Making of a Human Catastrophe by Ellen Clifford (Zed Books, 2020).

Disability issues are not just issues for people disabled by society, they are of prime importance for the entire working class because of the relationship between disability and capitalism. The last economic crisis in Canada saw an intense and sustained attack on public services and welfare programs that disabled people require to live life. While corporations and banks were bailed out with subsidies and cheap loans, all levels of government were busy freezing, cutting and privatizing vital programs and benefits.

Now, in the midst of a much deeper economic crisis there is every reason to suspect the rich and rightwing will aim to foist the cost of this crisis onto to the backs of the working class. For disabled people, the impacts of such austerity, will be an utter catastrophe.

A new book by disabled activist Ellen Clifford could not be more timely. Clifford, who is active in the UK with the Disabled People Against the Cuts (DPAC) looks at the intersection between capitalism and disability and how disabled activists have been fighting against the austerity agenda in the UK.

Clifford employs the social model of disability, which draws a distinction between disability and impairment. For Clifford and disability rights activists in the UK people do not have a disability, they are disabled by society — by capitalism. People have impairments, seen and unseen, but how society is organized is what makes people disabled. Disability is a historic and socially created category, not an individual issue. By highlighting the power dynamics in society which disable people with impairments it allows us to demystify the individualized language and understanding of disability, revealing a social oppression. Instead Clifford urges us to “understand disability as the deliberate exclusion of people who can’t serve the interests of profit.”

Clifford sees that class and disability are materially linked. Poor people are much more likely to be disabled by capitalism through lack of medical care, poor nutrition, violence, workplace injuries and pressure of daily survival. The barriers faced by disabled people in accessing employment, training, education, supports and social networks are part of a system which routinely drives disabled people into poverty and keeps them there. Disabled people have lower incomes because of labour market exclusions and often higher expenses. The question of disability cannot be separated from the question of class. As Clifford explains:

“Disabled people’s position in society is tied to what we represent within capitalism: an ‘unproductive’ element that cannot earn our own living or, if in work, is unable to produce the same levels of profit for employers as non-disabled workers. For capitalism to function, our experience of life must be worse than that of non-disabled people.”

Disability is a socially created category. It is structured by an economic system that puts profits ahead of people and a plethora of state policies and institutions which exclude, marginalize and ultimately disable people with impairments. The material basis of this social oppression is constantly reinforced through media narratives of disabled people as victims or as inferior. This stigmatization of disabled people has created conditions for violent attacks, hate crimes and routine discrimination.

Clifford argues that while the struggle for disability rights in the UK made great strides up to 2010, persistent inequities for disabled people remained. The once vibrant disability movement that achieved so much from the 1970s onwards had by the New Labour era become “de-radicalized, depleted and betrayed”. The downturn in the disability rights movement, along with Labour’s neoliberal policies paved the wave for the aggressive attacks on disabled people by successive Tory led governments after 2010.

The sustained and brutal austerity, with cuts to  public services and government supports, severely impacted disabled people in the UK, who account for over 13 million people. This post-2008 economic austerity should be familiar to Canadian readers. Increased surveillance, decreased access to benefits, cuts to vital benefits and supports, attacks on employment programs, and housing funds have been par for the course for the Tories. The move to Universal Credit system, which affects roughly 7 million people, with its mix of bureaucratic incompetence and outright Tory cruelty has been a particularly harmful experience for disabled people. The decade of Tory rule has resulted in what Clifford calls the resegregation of society, where reduced benefits and support has resulted in the further marginalization of disabled people.

Disabled People Against the Cuts

But it would be wrong to paint disabled people simply as victims of the system. While much of the mainstream media and parts of the left are comfortable with mobilizing the trope of helpless victim for disabled people, disabled people have been organizing and fighting. With the existing disability rights groups having waned under the previous Labour government a new organization, DPAC, emerged as a response to the Tory austerity regime. DPAC, which Clifford is a part of, rejected the charity model of disability and leveraged the idea of the social model of disability that aimed to unite disabled people in order to empower them to organize and lead a movement against the cuts.

DPAC used creative and militant actions that harkened back to the previous high point of disabled people’s movement. The goal was to create a large and inclusive movement led by disabled people that aimed to unite in struggle with non-disabled people. DPAC was able to achieve some significant victories against the Tories over the last decade. They forced Atos, a large multinational corporation, out of its contract to deliver the Work Capability Assessment after it was revealed it was systemically pushing people on lower benefits all in the name of profit. DPAC also was at the forefront of defeating the Tory’s plans at introducing workfare. And most notably, DPAC pushed the United Nations Disability Committee to publicly condemn the actions of the UK government. All of this was achieved through the self-organization of disabled people.

After over a decade of Tory cuts, Clifford notes the ongoing cuts and attacks on disabled people makes this bottom-up organizing more difficult, “the danger then is what we end up being spoken for and about and according to the oppressive views of disability that dominate society.”

The sustained organizing and resistance led by disabled people against Tory austerity is an example that should inspire. The courage, commitment and clarity of politics found in Clifford’s book are a resource that anyone who is serious about building a better world can draw on. Clifford correctly and forcefully reminds us that “it is not inevitable that people with impairments should be excluded and discriminated against, but it is inevitable that policies under a capitalist state will tend to treat less favourably those who are unable to be as productive in the workforce.”

The drive for profit and the cruelty of the system are bound together. Clifford makes clear that challenging the dominant ideas about disability and resisting the war on disabled people are not just add-ons in the wider class struggle. They are part and parcel of building bigger and more effective working class movements that can undermine the ruling class, take on the root of oppression, and build a world “from each according to their abilities, to each according to their needs.”

David Bush is a contributor to Spring Magazine