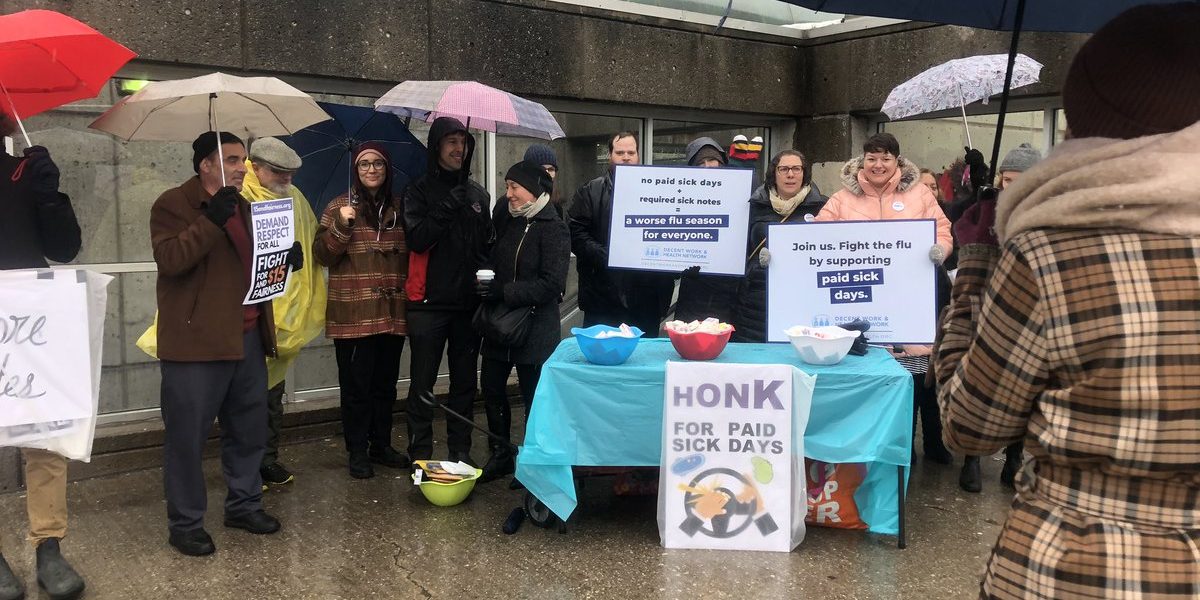 It’s that time of year; cold and flu season. You have a scratchy throat, a runny nose, and a bit of a cough. This seasonal feeling of discomfort is all too familiar for us on the East Coast.

When it comes to getting sick, I’m one of the lucky ones. I’m a full time Master’s student and Teaching Assistant at Dalhousie University. I study Sociology and can, thankfully, do most of my work where I please. Although I do try to stick to a routine of working on campus, if my symptoms get too bad I can stay in bed covered in tissues and – begrudgingly – do my work from home.

Last winter, I was knocked down and out for about a week and a half. I was a shell of a human, curled up on my couch. I tried my best to get what work I needed to do done, but in the end, I had to reschedule some meetings and grading. This allowed me to take the time I needed to rest and feel better; a privilege that is sadly denied to many. Not only was I able to rest and keep my job, but I could also still pay my bills (thanks student loans!).

But what if I didn’t have my loans? Or if my TA pay didn’t come in because I missed a few days? What then? I would be pushed into a position of precarity that I hope to never find myself in. Unfortunately, there exists plenty of workers for whom this is a reality.

When getting sick means risking employment

One friend of mine, who I will refer to here as Max, messaged me in a worrisome state. He wanted to complain – after all, friends are there to listen when you’re having a hard day. But this hard day was more than just having the sniffles or missing your bus when it’s raining. For Max, this bad day involved yet another day off work due to illness. He was forced to take sick days to get better – unpaid sick days.

Max works in the service industry. He has done so for years and has always been remarkable at what he does. In fact, he hadn’t taken a sick day since 2015. His unpaid absence made him worry about paying his rent, and rightfully so. He is the only earner in his household, and his biweekly pay was cut short due to his employer’s lack of paid sick days.

Max was becoming increasingly concerned about the impact of his sickness. He was told by his employer that he is not allowed more than 5 sick days a year or else he would be terminated. I wish I could say this is a rarity, a fluke even. But according to provincial labour laws, the proof is in the proverbial pudding.

So where does this leave workers? What is one to do if they get sick? If they cannot make rent? The rhetoric of “pull yourself up by your bootstraps” doesn’t work here, or anywhere really. For how can one pull themselves up if they are too sick to do so? If they are in a place of vulnerability? How is this fair?

I was shocked, angered, and ready to spring into action, although my enthusiasm was not shared with Max, who shrugged it off as “just another hard day”. When I approached him about his situation, he left the conversation stating, “oh well”. This is Max’s position – don’t get sick, don’t miss work, do your job, put your head down.

Max is not alone in this. In the current neoliberal landscape we live in capitalism leaves little room for restful down time, let alone time to properly organize and protest against oppressive forces and employers. This attitude of defeat is not a coincidence and is not just seen in low-paying service jobs either.

Take my mother for example, a hardworking, chronically-ill, Early Childhood Educator. My mother has Crohn’s disease; an auto-immune deficiency that often times leaves her dragged down by fatigue, sickness, mobility issues, and a whole laundry list of other ailments. Despite having Crohn’s, she works a 35-hour a week job, often putting in plenty of overtime for which she is not compensated monetarily. Don’t get me wrong, my mother loves her job. I have seen her passion in action as I have been lucky enough to work and volunteer alongside her in different capacities. However, you can still be exhausted doing what you love.

Despite my mother having post-secondary education and years of experience, she manages only to live comfortably and cannot afford to take too much sick time. After her Remicade infusions, which are comparable to chemotherapy, my mother has often gone to work in pain. She has talked about the possibility of working part-time, but she knows that this is hypothetical for now. The household bills cannot be paid with a part-time salary.

I have seen the impact of poor labour standards on both family and friends. I have pleaded with my mother to work part-time for the sake of her health, but how can one focus on their health if they cannot pay their bills? The current structure of our workforce leaves many employees with little agency over their own health and body. In New Brunswick workers are entitled to five unpaid sick days a year. In Nova Scotia workers are only entitled to three unpaid sick days a year.

When Ontario passed Bill 148, which granted 10 Personal Emergency Leave days a year without the requirement of a doctor’s note, the first two of which were paid, it was a major victory for workers across Canada. Unfortunately, the Ford Government passed Bill 47 last year which removed paid sick days. This year the Liberal government passed legislation bringing in three paid sick days as a legal minimum for all federally regulated workers. Which means at least some workers in every province have a legal minimum of three paid sick days.

Getting sick is not something someone chooses. It isn’t something one can control. Yet employers and the government sit back and act as though that is the case. I am sick and tired of watching loved one’s struggle and stress over things they cannot control. I worry for them, and I hate that the only realistic response is “oh well” because capitalism has left them too downtrodden to fight.

Fighting for an alternative

The system wants to divide and demoralize us into accepting a status quo which leaves workers in desperate and precarious situations. We need to unite to fight for reforms like paid sick days while also understanding that it is capitalism which puts profits over workers’ health.

So please join the Fight for $15 and Fairness campaign in whatever capacity you can. There is truly strength in numbers. We need to bring the heat and continue to fight for workers’ rights so that getting sick doesn’t risk someone’s stability.