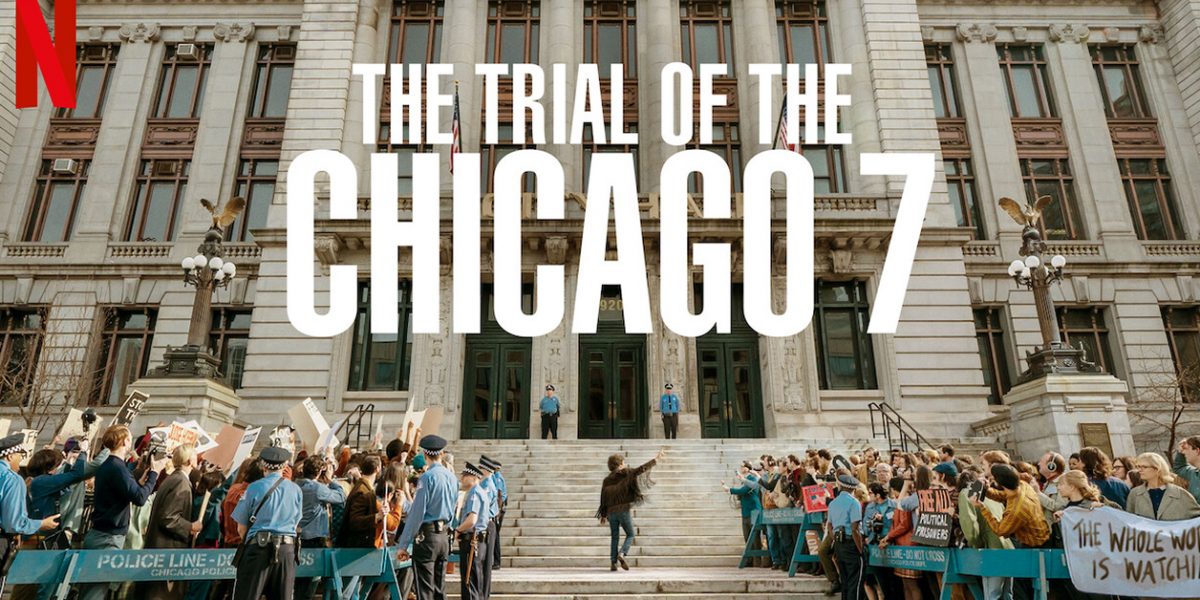 Admittedly, I was quite skeptical when starting to watch the new Aaron Sorkin film about the famous trial of activists after the riots at the 1968 Democratic Convention. Sorkin is best known for creating and writing for the White House drama The West Wing, the centrist fantasy about a Democratic presidency that continues to inform the behaviour of the most obnoxious party apparatchiks and apparatchik-wannabees.

Sorkin has gone on to do other significant work, including writing the screenplay for the Facebook drama The Social Network and a transgressive performance of To Kill A Mockingbird on Broadway. The consensus with all his projects is that Sorkin writes scintillating dialogue but that he can also descend into cringe that preaches directly to his sycophants but can be nausea-inducing for any one with more a radical political sense; see the worst scene in television history for an example.

To be fair, The Trial of the Chicago Seven is much better than a lot of Sorkin’s previous work. It presents a captivating courtroom drama that for much of the runtime leaves the audience with one conclusion, that all cops are in fact bastards and that the resistance to the war was the most noble of causes. But Sorkin can’t leave well enough alone and tries his best to undermine much of the films most powerful messages.

The DNC and Its Aftermath

The 1968 Democratic Party primary was fought largely on the issue of war in Vietnam, the escalating conflict that forced incumbent Lyndon Johnson to forego the nomination and his Vice President Hubert Humphry to seek it against two anti-war candidates, Eugene McCarthy and Robert Kennedy. After Kennedy was assassinated in June of 1968, the party establishment lined up behind Humphry heading into the convention to be held in Chicago.

Thousands converged onto the city, led by radical organizations such as Students for a Democratic Society and the infamous countercultural warrior YIppies among others. Despite the city refusing to grant permits, people converged in Lincoln Park for several days in late August to protest the war and the convention for nominating a pro-war candidate for president. The response of the police was to constantly harass the protestors, eventually using gross amounts of violence against protestors, so repugnant that one Senator inside the convention denounced the police use of “Gestapo tactics on the streets of Chicago.” After the fact, most have and continue to describe the events as a police riot.

Although the outgoing Democratic administration was not keen to prosecute leaders of the protests, the new Nixon administration felt driven to go after certain individuals it saw as key anti-war activists who would certainly continue to build mass resistance to the war that Nixon happily continued.  As a result, Abbie Hoffman, Jerry Rubin, David Dellinger, Tom Hayden, Rennie Davis, John Froines and Lee Weiner were indicted for conspiracy to incite violence and sent to trial, alongside Black Panther Bobby Seale, who barely participated in the events but whose inclusion aimed to tarnish the reputation of the other defendants.

Sorkin’s film focuses on the trial of the defendants and although conventional in many respects the politics of the depiction is quite good. The absurdity of the trial is on full display; a judge’s obvious bias toward the defendants, forgetting defense lawyer’s names, pushing sympathetic jurors off the jury, refusing Bobby Seale the right to defend himself, repeatedly charging defendants and lawyers with contempt. The grotesque disrespect for justice is thankfully met with the occasional humour of Hoffman and Ruben, who do not hesitate to mock the judge.

One of the most emotionally impactful moments in the film surrounds Bobby Seale finally having had enough of Judge Hoffman. The day after Chicago police murdered Fred Hampton, who had been advising Seale in the early stages of the trial, Seale is once again denied the opportunity to present his own defence and he refuses to be silenced. Judge Hoffman has him escorted out of the courtroom and instructs guards to do what is necessary, the result being Seale returned to the court room gagged and tied down in his chair. The violence and racism of the state are on full display, so ghastly that even the prosecution must ask for a mistrial in Seale’s case.

Where Sorkin soars and where he crashes

The drama of the court room is intense but so are the out of court room sequences where we get to know the protagonists. The casting is sharp, especially Rylance as defense lead counsel William Kunstler and Sacha Baron Cohen as Abbie Hoffman, who narrates much of the flashbacks to the protests through a hilarious comedy routine. Sorkin also delves into the political divides between the various factions inside the defense, letting Hoffman and Hayden to air out their disagreements about tactics. Whether or not it was fair to depict Hayden as a liberal at this point, it was nice to get a glimpse of the debates that we continue to have regarding the value of electoral politics versus movement building, without Sorkin being automatically dismissive or condescending of those critical of parliamentary approaches to social change.

Despite this, however, Sorkin manages to put a stinker into the last few moments of the film. During a discussion whether Hayden should testify, Kunstler produces a recording revealing Hayden as the instigator of the riot, when he encouraged folks to defend his friend Rennie Davis, who had just had his skull cracked by police. The scene is used to show that Hayden would not be the best witness to testify for the defense but the montage taking us to that point does its best to suggest that Hayden was irresponsible for responding so emotionally to his friend being harmed and leading protestors out of the park and toward the convention site. While the film doesn’t shy away from the inequity of force used, it does for an instant suggest that the protestors are partly responsible for the violence the state ended up using.

It’s very easy for liberals like Sorkin to claim sympathy for those fighting for social change but then rush to denounce them when social conflict becomes messier, more confrontational and challenging of the state. We saw it not only in the 1960s but also this year, when the mass movements against police violence took to the streets in response to several police killings of African Americans. Centrist politicians like Joe Biden were quick to condemn violence and looting as well as any radical demands being made, like defunding the police.  The film gives little to asking who are the true instigators of violence in society: the armed-to-the-teeth agents of the state like the police, or the mass of people responding in anger to the forces that perpetrate daily violence against us. This isn’t to say we can’t have constructive debates about tactics and strategies, as they did in the 1960s, but the montage scene Sorkin uses at a key juncture in the film feels like a “pox on both their houses” moment that distorts the inequity of force and power that exists between the state and protestors.

Sorkin’s obnoxious liberalism also sneaks in through the portrayal of lead prosecutor Richard Schultz, played by Joseph Gordon-Levitt. Throughout the film, Schultz is depicted as a hesitant player, never eager to prosecute the activists, outraged by the treatment of Seale, and willing to show sympathy for the defendants during a dramatic moment during their sentencing. There is little truth to Sorkin’s depiction though. Schultz never recommended that Seale’s trial be declared a mistrial. He never showed any sympathy for the defendants; in fact accounts suggest that he was eager to vilify and denounce them during the trial. There is no indication whatsoever that he was skeptical of the merits of prosecuting the seven. Sorkin feels the need to humanize these players, as if they were merely good people forced to do bad things, a theme he loves exploring in his other work but an approach that ends up letting really horrible historical actors off the hook.

Thankfully, the film ends on a powerful note, with the Judge offering lighter sentences if Hayden makes a statement of remorse during sentencing. Instead, Hayden begins reciting the name of all the American soldiers killed in Vietnam during the course of the trial, infuriating the judge but exhilarating supporters, all of whom stand up in support of Hayden’s actions (a scene almost ruined when Schultz also stands up in support of the fallen soldiers).

The Trial of the Chicago Seven is a well-crafted, superbly acted, important film that for the most part manages to indict the state and its players for their actions in response to the 1960s wave of protests and revolutionary activism. And even though Sorkin does his best to undermine some of the film’s most poignant messages, it is still a worthwhile film to see to better understand the lengths the state will go to in order to destroy any movement aimed at destroying systems of oppression and exploitation.