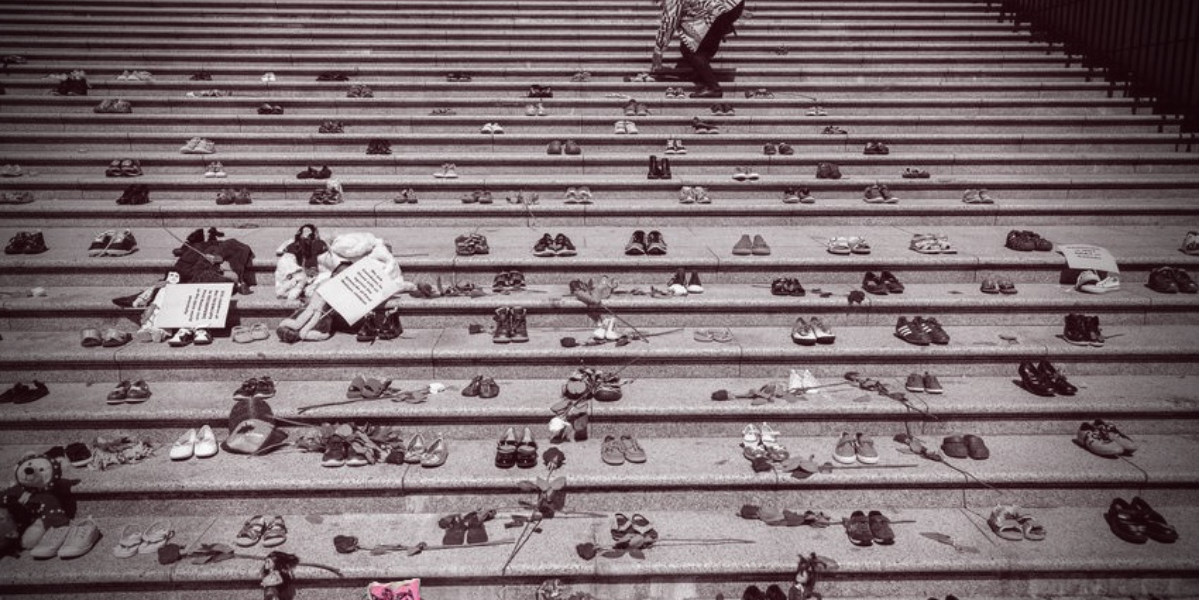 The discovery of 215 hidden bodies underneath the Kamloops Residential School re-excavates a national conversation about residential schools, a system designed by the Canadian state to break Indigenous people. Justin Trudeau wrote in a tweet that the revelation “breaks my heart—it is a painful reminder of that dark and shameful chapter of our country’s history.” And there lies the problem, for the chapter never closed, and settler-colonialism carries on as the organizing principle of this country.

According to the Federal government’s own estimates, at least 150,000 children were forced into residential schools, but there are no hard figures. The government failed to keep records because Indigenous children were considered sub-human, unworthy of history.

The Truth and Reconciliation Commission (TRC) was established through an agreement between Indigenous communities and the federal government. The TRC defines cultural genocide as “the destruction of those structures and practices that allow the group to continue as a group.”

The Commission’s final report confirms that Canada severed Indigenous people from their communities to gain control over Indigenous “land and resources.” While state officials may reluctantly and cynically acknowledge “cultural genocide” as a lesser degree of genocide, cultural genocide is among a continuum of policies that amount to the destruction of Indigenous nations. Pam Palmater noted, “They were killing us because we were Indians, and we stood in the way of accessing all of the lands and resources and settlement in this country.”

And still, the state may attempt to reframe cultural genocide as a ghost of history, a tragic story of a country stumbling through its beginnings. Let’s be clear: genocide remains a deliberate strategy in the Canadian state-making process.

The TRC identified a motivation for the state’s use of residential schools:

“The Canadian government pursued this policy of cultural genocide because it wished to divest itself of its legal and financial obligations to Aboriginal people and gain control over their land and resources. If every Aboriginal person had been “absorbed into the body politic,” there would be no reserves, no Treaties, and no Aboriginal rights.”

Trudeau reframes Indigenous death in the past, but his government still perpetuates genocide now. Settler-colonial violence, after all, is easy to dismiss as yesterday’s tragedy when we disassociate it from the strategic objectives that drive Canadian colonial policy. Glen Coulthard, the author of Red Skin White Masks, argues that settler-colonialism aims to dispossess Indigenous peoples of their lands and deny their self-determination. He rejects the notion that the destructive legacy of colonialism can simply be reconciled through acknowledgement. As Coulthard notes, “the relationship between Indigenous peoples and the state has remained colonial to its foundation.”

Capitalism cannot survive without settler-colonialism. Terra nullius — the legal doctrine that these lands were empty and without people before the colonial encounter — still forms the basis of Canada’s relationship with Indigenous peoples, acting as a bridge between the violence of yesterday and today. That colonial doctrine fuelled the settler-colonial violence of residential schools and the 60’s scoop, tactics of genocide deployed by Canada to destroy Indigenous sovereignty. Genocide happened through the prohibition of Indigenous language and spirituality in residential schools.

The TRC identifies the strategy behind residential schools:

“The Canadian government pursued this policy of cultural genocide because it wished to divest itself of its legal and financial obligations to Aboriginal people and gain control over their land and resources. If every Aboriginal person had been “absorbed into the body politic,” there would be no reserves, no Treaties, and no Aboriginal rights.”

That settler-violence of the past is reasserted through state policies like the RCMP invasion of Wet’suwet’en territory in the winter of 2020 or the denial of adequate Federal funding for Indigenous child services (despite numerous orders by the Canadian Human Rights Commission). The arrest of more than 100 old-growth defenders by the Royal Canadian Mounted Police (RCMP), as they enforce a British Colombia court injunction, is a continuation of the Canadian policy. The state’s failure to account for Murdered and Missing Indigenous Women and Girls (MMIWG) is steeped in Canada’s attempts to erase Indigenous peoples from these lands. And the imprisonment of Indigenous people in Canada’s penitentiaries extends the strategy of residential schools today.

The government of Canada issued a statement on its website that acknowledges the TRC and the “list of specific actions to redress the legacy of residential schools and advance the process of Canadian reconciliation.” Canada hides behind the TRC report, even flaunting it as part of its national rebranding strategy, but ignores its most fundamental implications. Residential schools were used against Indigenous peoples because the state sought to “gain control over their land and resources.”

It’s Canadian violence that carries on, but Trudeau denies death even while his ‘heartbreaks.’