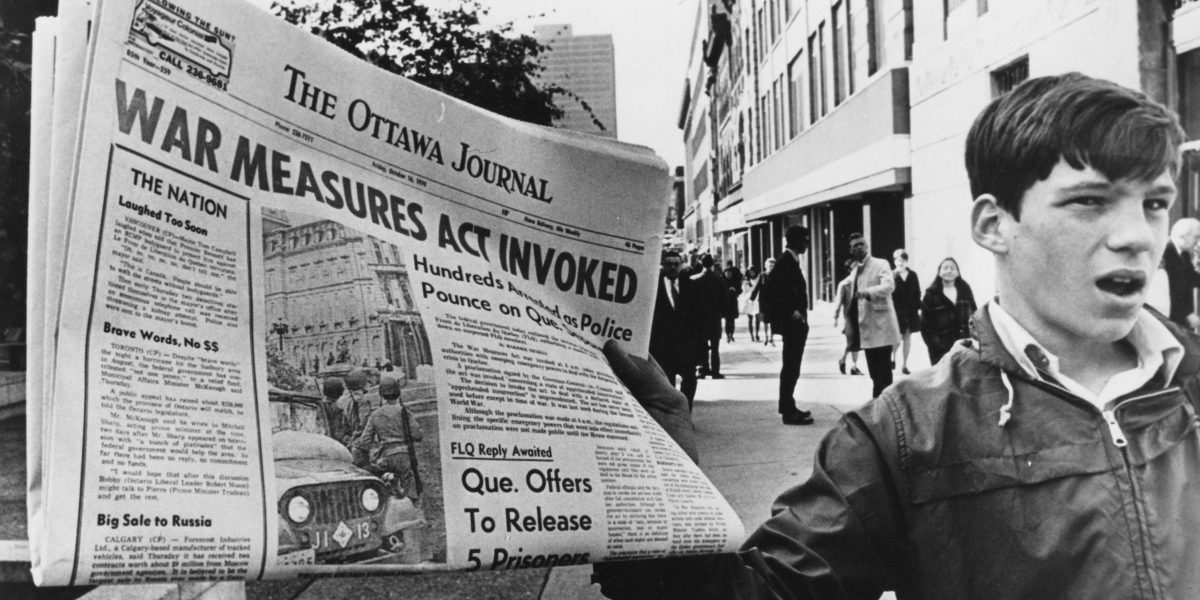 It was October 16, 1970, fifty years ago today. Turning on CBC radio over breakfast that day, I was startled to learn that the War Measures Act had been decreed across the entire country. The Canadian equivalent of martial law, War Measures were invoked on the excuse that the country faced an “apprehended insurrection.”

During that night, hundreds in Quebec had been arrested. Secretly. No charges. No phone call. No right to a lawyer or court hearing. All civil liberties were suspended. Quebec was under military occupation. A few hours later, television news started showing photos of soldiers in battledress armed with assault rifles and of tanks in the streets of downtown Montreal.

I got in touch with other members of the League for Socialist Action in Toronto, where I then lived. Our first concern was to contact our group in Montreal, which had several dozen active supporters. At first, no answer. Then news: the editor of our French-language newspaper, Art Young, had disappeared, along with another leading local comrade, Penny Simpson. Hundreds in Montreal had been jailed and arrests were continuing.

The federal government’s drastic attack on civil liberties did not come as a surprise. Only three days earlier, Prime Minister Pierre Trudeau, when asked how far he would go to “restore order” in Quebec, had quipped, “Well, just watch me.” He claimed that a “parallel power” had emerged that was challenging elected political authorities.

Earlier in October, a British diplomat, James Cross, and Quebec’s deputy premier, Pierre Laporte, had been kidnapped by cells of the FLQ (Quebec Liberation Front). Many Quebeckers, while often critical of the kidnappings, expressed support for the liberatory goals of the FLQ manifesto.

The previous decade had witnessed a tumultuous rise of labour and nationalist movements in Quebec, and of support for radical social reforms and political sovereignty. Quebec had seen massive student strikes and protests, an explosive rise of labour militancy, and deep-going structural reforms such as nationalization of its electric power industry and of the previously church-run educational system.

In addition, during the decade, a succession of small groups seeking to spark a colonial freedom struggle had carried out more than a hundred guerrilla-style attacks using the FLQ label.

My organization, the League for Socialist Action/Ligue Socialiste Ouvrière, contended that the real responsibility for this violence lay “with the monopolists, the exploiters who are repressing the Quebec nationalist movement.” While criticizing kidnappings as a method, we called for an end to attacks on civil liberties and freedom for political prisoners.

These events unrolled long before the Internet age. As socialists, we did not have access to daily papers, television, cellphones, or radio. We communicated with each other and the broader world in person, by phone, by letter mail, and by printing and distributing literature. But the War Measures seemed at first to have outlawed all public radical activity.

The day after the War Measures decree I took the first train to Montreal. I located my Montreal comrades, who had gone underground. Expecting further arrests and a raid on our headquarters, they closed down our headquarters. They removed our most valued asset – our card file of contacts and subscribers – and took it out of Montreal for safekeeping. They buried it on the farm of a member’s friend. They set up a provisional office in couple of motel rooms, equipped with two typewriters, paper, carbons, one telephone, and a list of phone numbers.

By that evening it seemed that the wave of arrests was ending. Already, there were signs of dissent regarding Trudeau’s drastic measures. Figuring that the government had overreached, we made plans to reassert our right to speak and help build the protest movement now beginning to take shape across the country.

We set out to help break down the gag law, step by step, by reopening our office, publishing and widely distributing our views, and doing all we could to help build resistance to the War Measures.

We had a great asset. Montreal would be voting in a few days to choose its mayor, and we had a socialist candidate in the field: a young and dynamic activist, Manon Leger. Despite the mass arrests, guns, and tanks, the election was going forward.

We were supporting a promising new left political party, “FRAP” (Front pour l’action politique). They had no mayoralty candidate, so Manon, challenging the notoriously right-wing mayor Jean Drapeau, complemented their slate. Under War Measures, FRAP offices had been repeatedly raided, confidential files seized, and  their lawyer interned. Drapeau slanderously associated the FRAP with the FLQ. Martial-law measures had dealt FRAP a crippling blow. Manon spoke out in their defense.

Under War Measures, printshops were closed to us. But back in Toronto, our headquarters housed our own small printshop – a rarity in those days – and it was effectively underground.

We in Montreal worked together with our comrades in Toronto to prepare articles for emergency underground editions of our newspapers in English and French. Travel between the two cities was still open, so we sent a comrade to Toronto with articles and then received, again by courier, a large press run for mass distribution.

We take to the streets

Three days after War Measures, we organized Montreal’s first street action against the crackdown. We planned it on a very small scale, aiming to show the scope for public protest without risking too much.

We sent out two squads. One crew, including Manon, went to the main subway station, Berri-De Montigny, with signs and leaflets building her campaign.

I was part of a second crew, which went to the Canadian Forces armouries at Bleury and Ontario streets, home of the Black Watch Regiment. It was a prominent spot, just a couple of blocks from the subway station. We started picketing and leafleting, right under the noses of the armed soldiers. “Withdraw federal troops!” we shouted, in French. “Free political prisoners! For a workers’ city hall!”

It took the authorities about an hour to decide what to do with us. Eventually, we were all arrested and hauled in to the local cop shop. There was another a long wait while the cops tried to decide what to charge us with. Finally, they booked us for “sporting political insignia within a week of an election” and let us go. The charges were farcical. They revealed that the authorities did not dare invoke the draconian provisions of the War Measures Act. A clear victory for freedom of speech!

Getting out the word

Three more days; I was back in Toronto; and 11,000 copies of our emergency French-language newspaper reached our comrades in Montreal. They were distributed widely in campuses and workers’ districts. There were no arrests. This was a test of the relationship of forces. Activists took note: conditions were good for a revival of broad protest activities.

Manon got some media breaks. She picked up on a widespread sentiment that all Quebeckers were themselves hostages, members of a nation kidnapped 200 years before.

In the October 25 mayoralty election, Drapeau and his allies were victorious; FRAP candidates were defeated. Manon picked up 7,000 votes, a quarter of those voting against Drapeau.

By then, an impressive civil liberties campaign was under way, led by a new coalition, the Front Commun pour la Liberté.

The police never raided our Montreal headquarters, but they did descend on the farm where we had buried our precious records. Fortunately, they found nothing.

Most of those interned under War Measures, including Art Young and Penny Simpson of the LSA/LSO, were soon released without charges. Opposition to the War Measures gathered momentum, finding expression in the defense effort for those few detainees who faced formal charges. Within three months, the military occupation was over. Despite continuing repression and secret police disruption, the civil liberties enjoyed before the crisis were largely restored.

The labour and peoples’ movement in Quebec, recovering from brutal repression, was on the march once more.

This article was first published on John Riddell’s blog.