The Second Wave of Uprising in Sudan: Revolutionaries Speak 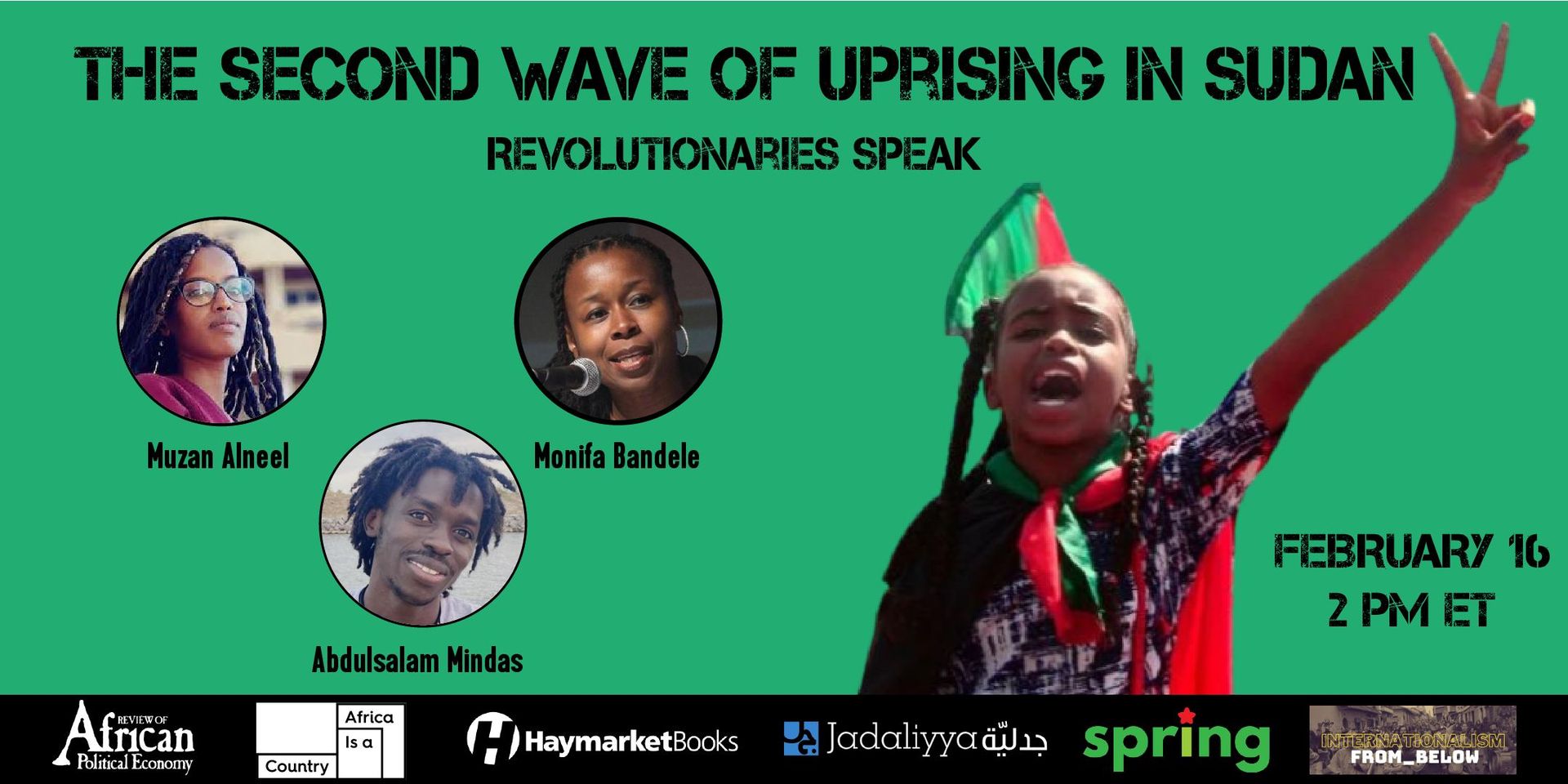 Join Sudanese revolutionaries from on the ground to discuss the flourishing of revolutionary bodies and resurgence of the uprising in Sudan.

The 2019 revolution in Sudan, which overthrew longtime President Omar al-Bashir, was the earliest of a second-wave of uprisings that has swept from Algeria to Iraq, reigniting the hope of the 2011 revolutions in the region.
The uprising, known in Sudan as the December Revolution, culminated in August 2019 in a civilian-military partnership, for what was to be a “transition” to full civilian rule. But in October 2021, a military coup drove out the civilian coalition partners. The resistance that the coup has sparked since has breathed new life into the revolutionary movement in the country, and accelerated the evolution of organizing in a way that bears lessons for movements for social justice everywhere.

In response to the coup, widespread mobilizations, led by Sudan’s neighborhood-level resistance committees, have produced ongoing strikes, civil disobedience and protests demanding an end to the military coup and the formation of a fully civilian, revolutionary government to decide the country’s leadership and its future, and to reclaim control of its looted resources for the benefit of communities.

Revolutionary bodies, in particular the network of neighborhood resistance committees which now spread across the country, have pushed the struggle forward beyond previous compromises. They have also offered an alternative model of resistance and governance that presents a clear break from the elite politics of the past. Though the revolution in Sudan has so far been formidable in the face of repression, it faces immense challenges, given the ways in which regional and international counter-revolutionary forces have coalesced to back the military. This leaves us with a crucial question: how can this struggle, whose outcome will have consequences beyond Sudan’s borders, go on to achieve its slogan, “freedom, peace and justice”?

To explore that question, the panel will highlight voices and analysis of Sudanese activists who are deeply involved in the revolution, and who will provide their take on the stakes involved and the aims, strategies and tactics of the movement. The event also intends to create space for conversation to explore solidarity actions beyond Sudan, in particular, how to deepen ties with activists in the Movement For Black Lives and anti-racist struggles in the U.S. Join us for this important discussion.
The conversation will be held in Arabic and English, with simultaneous interpretation to English.

-Muzan Alneel is a cofounder of the Innovation, Science and Technology Think Tank for People-Centered Development (ITSinaD) — Sudan and a nonresident fellow at the Tahrir Institute for Middle East Policy (TIMEP), focusing on a people-centric approach to economy, industry, and environment in Sudan. Recent writings include The People of Sudan Don’t Want to Share Power With Their Military Oppressors (Jacobin) and Why the Burhan-Hamdok deal will not stabilise Sudan (Al Jazeera).

-Monifa Bandele (moderator) sits on the policy table leadership team for the Movement for Black Lives (M4BL), as well as the steering committee for the New York-based Communities United for Police Reform, representing the Malcolm X Grassroots Movement in both coalitions. Just in the past decade, she led the launch of two historic and successful legal cases against police misconduct (Daniels v NYC and Floyd v NYC); worked to pass landmark police reform legislation in New York City (Community Safety Act 2013) and New York State (Repeal CRL 50-a bill, Special Prosecutor, and NY STAT Act); and was a contributing writer to M4BL’s Vision for Black Lives and the BREATHE Act.

REGISTER through Eventbrite to receive a link to the live stream the day of the event:

This event will also be recorded and live captioning will be provided.